I didn’t get this post up in a timely fashion but, the title says it all. 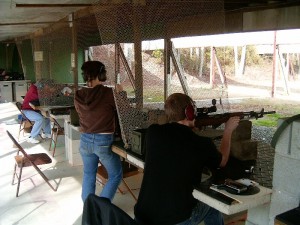 Last weekend, I made my range trip to try out the Mosin and check the Zero on the scope on the SKS. Well, that’s what the range trip started out as being all about.

A couple of days before the trip I asked my son if he would like to go. I told him that my wife might make the trip so to invite his wife as well.

Well, my wife decided she had too many other things to do, but his wife decided to go. This was only the second time for her to fire any type of firearm. She fired a shotgun (once) while in Pennsylvania last summer at our annual family reunion.

She is a little intimidated by the “loud bang” and “recoil” thing so she was understandibly nervous. I didn’t want to push her so I threw the Marlin model 60 .22 in the car along with the Mosin, SKS and M1 (which is my son’s favorite). I also had my carry piece, a Ruger P97 in .45 acp.

Having a newbie shooter really undermined my original purpose for being there. I did shoot both the Mosin and the SKS at 100 yards but I didn’t get a chance to move to the 200 yard line and I was paying so much attention to coaching my daughter in law that I really didn’t take the time to get a good feel for how either were shooting. I’ve got another update on the SKS to post when I’ve got time to put the post together and I need to make another range trip so the range reports on the Mosin and SKS will come later.

First, before the first cease fire that would allow us to hang our targets, we went down to the pistol side of the range. My daughter in law watched my son and I ping metal targets at 15 to 25 yards with my Ruger. She saw how much recoil there was and wouldn’t touch it. I don’t blame her.

Luckily, there was a nice older gentleman there with a Smith and Wesson .22 revolver. I asked politely if he would mind a new shooter taking a couple of shots. He graciously said “I would absolutely LOVE for her to shoot it”. We loaded up and she emptied the cylinder once before the cease fire was called.

She was shooting at an old target and I wasn’t really concerned with her accuracy at that point, I was just trying to show her the basics of handgun safety, how to hold, line up the sights and basic trigger control. For that reason, we didn’t check her target.

After that, we went down to the 100 yard line and hung our targets. I went through the briefing routing with her again. My Model 60 has a scope on it so she got a chance to try that. Basically, she stuck with the .22 rifle and my Son and I shared the Mosin, the SKS and the M1. My son tried to get her to try the SKS as the recoil from it is not bad, but she was reluctant and I basically told him not to try to talk her into it until she’s ready. Don’t want to sour her to the whole thing.

She enjoyed it emmensely. She put about 100 rounds down range and kept all but a couple in the black. I told her how good that was for a first time shooter and she decided to take her targets home with her.

The only drawbacks to the day:

We ended up with a combination of Mr. Unsolicited Advice and Tacticool Teddy from This Post at What Would John Wayne Do in the lane next to us. He was a nice guy and let my son shoot some of his toys (AR-15 variants and a .300 Win Mag sniper setup). The guy did know what he was talking about and didn’t waste our time with a bunch of BS, but I just don’t like other people talking over me…no matter how helpful they are trying to be…when I’m instructing someone. The student ends up trying to absorb too much at once and ends up simply being confused. He was trying to make her an expert marksman right out of the box when I was going more slowly and taking one basic concept at a time. Anyway, we tolerated him because he wasn’t giving her bad info, just too much at a time…and he did let my son play with his toys.

The other thing is that the range that we go to wouldn’t let us place any home-made reactive targets down range. A couple of tomato Juice cans hanging from a string can be very fun for a new shooter to knock around. She could see her hits in the scope which helped because she had immediate feedback about her shooting, but plinking cans and knocking things around is just much more interesting for a new shooter than making holes in paper.

Anyway, those two things aside, we had a wonderful morning at the range and even enjoyed the conversation during the two hours we spent in the car round trip. Well worth it, even if I didn’t get to accomplish the mission the range trip was orignially planned for.