There is an update in the section about the rear sight.

Welcome to the latest edition of my M1 Carbine Posts. To recap:

In this episode, we are going to disassemble the stock and receiver components that need to be cleaned and inspected.

There really isn’t that much to do with the stock and receiver after the rifle has been field stripped. The only things that even CAN be removed from the receiver are the front and rear sights, the gas piston nut and gas piston, and the barrel itself.

We’re not going to completely disassemble these two items because some of the parts are too difficult to remove without damaging them and are simply not necessary to remove in order to complete a good inspection.

I’ll briefly discuss removal of the other components, but the only things we well actually be removing are the gas piston nut and gas piston from the receiver, the butt plate, and the recoil plate from the stock. 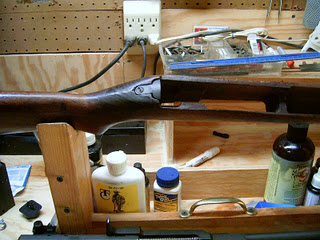 First lets look at the stock.

On the stock, I wanted to inspect the wood underneath the recoil plate. It is only held in by one screw so removal is pretty straightforward. 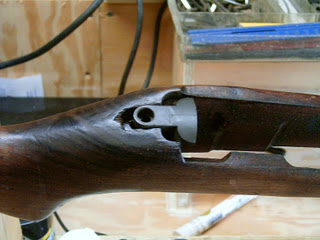 To release the plate from the stock, after removing the screw, pull it forward, and then up and out of the stock. 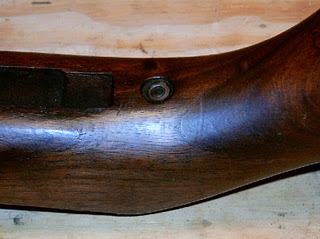 For complete disassembly, the escutcheon on the underside of the stock would also have to be removed. I didn’t go that far because I felt it unnecessary and could damage the stock. To do it wouldn’t be difficult however.

Leave the recoil plate out but thread the screw back into the escutcheon. Screw it in far enough to prevent damage to the threads when driving it out, but leave the head of the screw high enough to tap it with a mallet.

Tap the screw head with a mallet to push the escutcheon out the bottom of the stock. 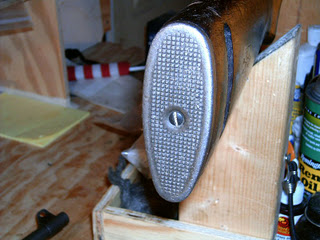 Next is the butt plate. It’s pretty simple too. One screw, then pry the plate free from the stock. 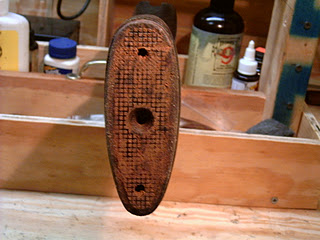 On my stock, there are two holes above and below the center screw hole. I don’t know if that’s standard or not but it gives the impression that there may have been a butt plate with two mounting screws installed at one time. Anyone ever seen this before? 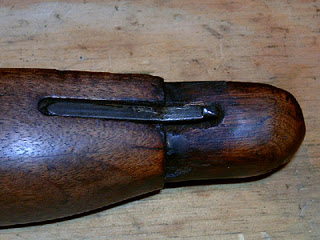 The final piece on the main part of the stock is the front band locking spring. 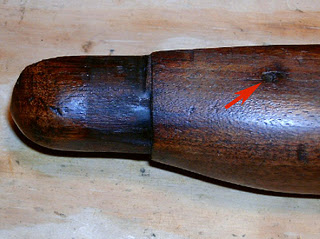 There is a hole in the stock on the opposite side from the working part of the spring. Use a long, thin punch to drive the front band locking spring spindle out of the stock and remove the spring. 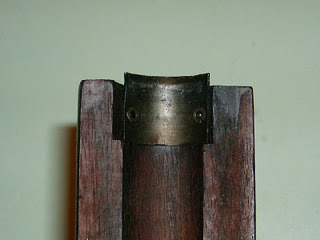 It is held on by either two or four rivets. To remove it, the rivet heads will have to be drilled off and the rivets drifted out of the metal and wood. Obviously, this is something that, if done improperly, could render the handguard, the handguard liner, or both unusable so it should only be done if absolutely necessary.

Moving on to the receiver/barrel. 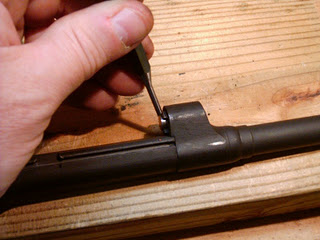 The only part I actually removed was the gas piston nut and gas piston. This is not something that should need to be done often, but the gas piston will, over time, build up carbon deposits and will need to be cleaned. There is a special tool for removing the gas piston nut, but I don’t have one yet. I’ve got one on order from the CMP e-store, but they are pretty overwhelmed trying to catch up with the Carbine order feeding frenzy so it may be awhile before I get it.

In any case, I used a punch to get it broken loose and then just a pair of 90 degree angle needle nose pliers to spin it out. It wasn’t too difficult. 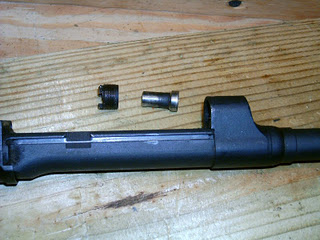 After the nut is removed, the gas piston just pulls right out. 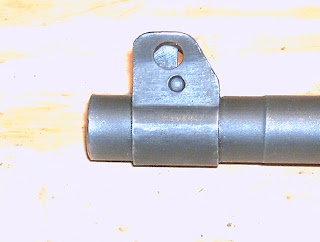 The front sight is crimped and staked in place so it should not be removed unless absolutely necessary. Also the band of metal that goes around the barrel is relatively thin and it seems to me like it would be very easy to damage it when removing the sight.

At any rate, if the front sight is to be removed, there is a cross pin that must be drifted out. 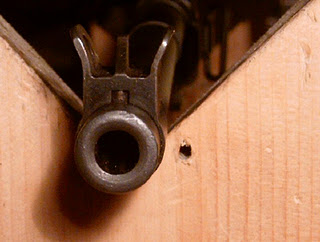 Then the front sight is driven off the front of the barrel. There is a special tool for removing the front sight (Fulton Armory has them), but I would imagine that I could use my gear puller just like I did with the SKS if I needed to.

There is also a key that locks the front sight to the barrel to prevent movement. The key is staked in place so it must be knocked loose with a punch or brass hammer after the front sight is removed. 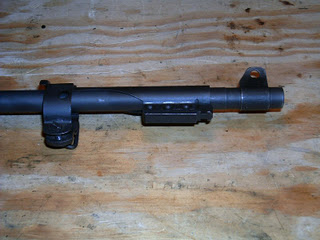 After the front sight is out of the way, the front band can be pulled off the front of the barrel. 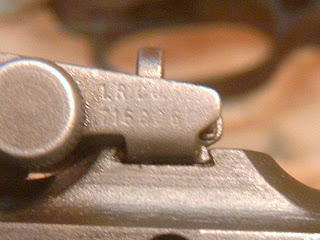 The rear sight base is a basic dovetail joint. The dovetail is beveled so that the sight can only be removed in one direction. There is some confusion at the present time about which direction the sight must be removed. If anyone knows the definitive answer, please enlighten us, but the the two references that I have contradict each other. One says it must be removed to the right, the other says to the left. I don’t know which one is correct. Also both references refer to the older style “flip” type sights. They don’t mention whether the newer style sights are any different. I can’t imagine that they would be but you never know. I’ve got inquiries out with a couple of gunsmiths so I’ll update this post if I get a good answer.

Update: I got an answer from a gunsmith that specializes in M1’s. Orion 7 Enterprises was kind enough to answer the question. The sight must be removed from right to left and installed from left to right. A reader who is working on restoration of an M1A1 Paratrooper Carbine needed the information. I’m hoping he’ll let me know how it goes and you may even be treated to a guest post about his rifle if he is so inclined. 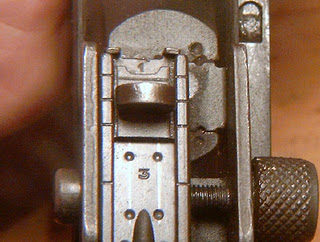 The sights are also staked into place after installation so they may be very difficult to remove. You can see the staking at the top and bottom of the dovetail to the right of the sight in this picture.

I saw a homemade rear sight removal tool that looked like it was made from a modified drill press vise but I can’t find the link any more.

It had a jig to hold the receiver in place and a screw type mandrel that was used to press the sight out of the base. The sight could also be drifted out but I would imagine that it wouldn’t be easy with the sight staked in place. I would think that an enterprising amateur gunsmith could figure out a way to use a standard bench vise to press the sight out but I haven’t had the need to try it yet.

The only remaining piece to this puzzle is the barrel. The barrel is threaded in place and there are special tools for removing it. There is simply no reason to remove a barrel unless it needs to be replaced. In that case, unless you have the tools and knowledge necessary to adjust headspace and to ensure perfect barrel alignment, I would leave that evolution to the pros.

There you have it.

We have completely disassembled and detail stripped the M1 Carbine.

In the next post, we’re going to get into the details of the parts on my carbine, what parts are correct for the manufacturer and period and what parts aren’t. This particular part of discovering my new old rifle was a very interesting trip into the wayback machine. Of particular usefulness was Craig Reisch’s “U.S. M1 Carbines Wartime Production” (4th edition). Excellent resource for M1 Carbine collectors.