As usual, I apologize for the crappy quality of my photos. Have I ever mentioned how cheap and sucky my digital camera is? Click all pictures to enlarge

As I mentioned yesterday, as a fitting cap to National Exercise Your Rights Day, the Virginia Citizen’s Defense League attended the Norfolk City Council meeting to bring attention to the mistreatment of law abiding gun owners for no reason other than exercising their rights under the Constitution and Virginia State Law.

The event was well attended but this is a prime example of why eye-witness testimony is unreliable. The print story estimates the number of VCDL attendees as “more than 100” while the narrator of the video reported “about 30 people or so”. With the exception of about 20 people in the seats and a couple of minor functionaries standing in the back, pretty much the whole crowd was there to support VCDL. A few people who hadn’t even come with us or as a part of our group stood in solidarity when a speaker asked all who supported the VCDL position to stand. Anyway, I don’t know if it was “over 100” but it was defnitely more than “30 or so” and I’d say it came very close to 100. Excellent showing as usual. 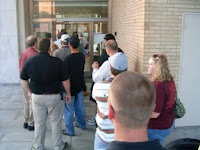 I arrived at about 6:40 or so and immediately identified VCDL members scattered throughout the city hall grounds and parking areas. We’re generally pretty easy to identify at one of these functions.

Prior to entering, we were required to sign a log and show ID. They didn’t specify the purpose for this or any criteria under which anyone would be denied entrance. In my humble opinion, it’s just a feel good measure to reassure our benevolent rulers that there is SOME (false sense of) control over which of the riffraff is allowed into their August Presence.

I thought it was quite humorous that a sign at the door boldly proclaimed that all bags were subject to search upon entry. The guy in front of me had a Glock openly holstered on his side and a bag in his hand. I idly mused: “I wonder if they’ll search your bag…who knows, they may find a gun in there.” The security guard didn’t seem to see the humor in my comment…but he didn’t search the bag. 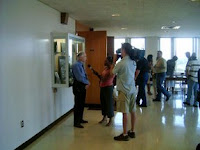 After the elevator ride up to the 11th floor, I immediately spotted the President of the VCDL, Phillip Van Cleave, being interviewed by unidentified members of the press.

I would have liked to have said “hi” to Phillip. We speak via e-mail and have met several times at events so I consider him a friend, but he was busy with more important things so I left him to it.

Phillip, as well as many other VCDL board members, is a workhorse for the cause. He travels all over the state in support of gun rights issues. If there is something going on related to gun rights in the state of Virginia…you can count on seeing Phillip there. The guy is tireless and selfless and he has my utmost respect and admiration.

After we got settled in, the city council graced us with their presence and filed into their designated thrones…only about 20 minutes late. The Agenda items were dispensed with quickly. Most of the items involved the benign overlords of the City Council granting (or, in one case, denying) their omnipotent and benevolent permission for lowly citizens to do this or that in the course of conducting their business or daily lives. What has this “free” country come to when the city council can deny a business owner permission to put up a sign advertising his business? But I digress.

After the agenda items were handled, the “honorable” mayor indulged we lowly supplicants in begging their audience.

It rapidly became apparent that gun owners are not the only ones who fall afoul of the Norfolk Police Department.

First, I would like to say unequivocally that, in my few dealings with the NPD, the officers have been unfailingly professional, courteous and efficient. I’ve never had a problem with our local “peace officers.” However, it is apparent that there is some chaff mixed amongst the wheat that needs to be culled. According to one speaker, her son was stopped while walking a female friend home after dark; the officer demanded ID which was provided. After the check came back clean, the officer wasn’t satisfied and demanded the citizen’s social security number. When he refused to give it, he was arrested for “disorderly conduct” and taken to jail. Another speaker gave an account of police officers harassing his son on his own property. The son was apparently sitting on the front porch after returning home from work, the police determined that sitting on one’s own porch enjoying the evening is somehow suspicious behavior, entered the private property, demanded ID and questioned the citizen about his intent. In this case, thankfully, the subject…er…citizen was not arrested. A third person spoke of neighborhood kids being stopped, questioned and harassed for nothing more egregious than riding bicycles in the neighborhood. Apparently, only drug dealers ride bikes in Norfolk.

There is a growing gang problem in Norfolk, but is harassing citizens just trying to go about their daily lives going to solve that problem? Are civil liberties and rights dispensable? Do they only exist at the whim and whimsy of our overlords? Does the Bill of Rights have a “not applicable in the case of gang activity” clause of which I’m unaware?

The most disturbing of these accounts was the person arrested for “disorderly conduct” because he refused to give a police officer a Social Security Number. What kind of police state are they running here? 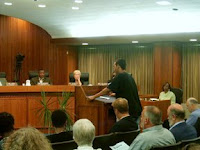 Anyway, VCDL members finally came up to bat. It wasn’t pretty. The first member recounted how he was accosted by Police twice in the same general area. During these encounters he was handcuffed and questioned by the officers for no reason other than legally openly carrying a firearm. After the second occurence, he was warned by the officers that “this would happen” every time they saw him armed. 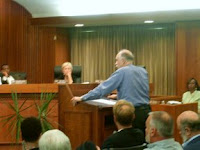 Phillip spoke eloquently as usual, followed by a few other members including a former Law Enforcement Officer who said he was “ashamed” by the incidents.

The VCDL members made no bones about how upset we, as a group, are about these incidents. None of the City Council members made any statements or rebuttals, the city attorney was present but wisely kept his silence; but, safely away from the presence of those who know better, the city attorney has contended that the illegal city ordnances were simply a result of an “oversight” and that this was all just a big misunderstanding.

Several of the members made sure to express the fact that we know better…and we know that THEY know better. We’ve been through this before with Norfolk. This is nothing more than the equivalent of a spoiled two year old testing the boundaries. Pushing the edges to see what they can get away with. City ordnances regarding the bearing of arms in public have been pre-empted for several years now and the Norfolk City Council knows it. This was no “oversight” and WE know it. The VCDL made it very clear that, regardless of the personal opinions of the Mayor and city council members, they are required to follow the law. They don’t have to like it, they only have to obey it. And we WILL hold them accountable when they do not.

The meeting got a little contentious when a young lady who had not signed up to speak tried to address the council. Mayor Fraim made it clear that they were not really interested in hearing what citizens have to say unless they beg permission first. He repeated several times “I’m running this meeting” and I thought for a moment that he was going to have her arrested. The situation was resolved when the young lady relented and left the room. 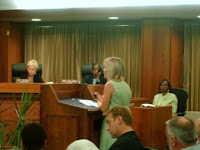 The highlight of the evening was the emotional testimony of Mrs. Szymecki as she related the story of her husband’s false arrest. The Officers were heavy handed and unnecessarily harsh. They frightened the five children that the Szymecki’s had with them and threatened to arrest Mrs. Szymecki when she attempted to record the incident with her cell phone camera. They refused to get the car keys or any money from her husband so, after his arrest, she was left stranded with no money, no transportation and five kids…for no reason. Her husband had committed no crime. 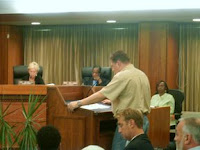 Mr. Szymecki also recounted the tale from his perspective. Related how, as a disabled Veteran, his disabilities were exacerbated by the harsh treatment. How, after cooperating fully and assuring the Officers that he was no threat, he informed them that the handcuffs were causing him pain and asked for them to be loosened; in response, the Officer tightened them excruciatingly and sarcastically stated “they’re not supposed to be comfortable.” How the officer trying to disarm him was fumbling with his loaded sidearm, obviously unfamiliar with it and presenting a credible danger to innocent bystanders through the potential for a negligent discharge.

And this was all totally unnecessary. Mr. Szymecki had done NOTHING wrong, had at no time acted in a threatening manner and was doing nothing more than trying to enjoy the festival with his family.

All we, as citizens, expect, is that our government officials…our EMPLOYEES…obey the law just like the rest of us are expected to. Is that too much to ask? 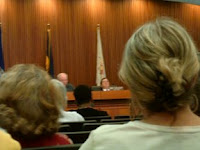 One final note. One council member, Paul Riddick, couldn’t even be bothered to listen to what his employers had to say. He left the chamber before any VCDL members spoke. Another council member, Randy Wright, was apparently too tired or bored to take our comments seriously. As soon as the agenda items were dispensed with, he lounged back in his chair and seemingly dozed through the comments of his constituents. I tried to get a picture of it but my camera kept insisting on focusing on the back of the head of the lady in front of me so you can’t see his face, but you can see his body language and how he was sitting.

And these arrogant, incompetent, elitist boobs fancy themselves our betters?

One further aside, as I was leaving the building, I held the door for Mrs. Daun Hester, council member for Superward 7. She smiled politely and thanked me for coming. She seemed friendly and sincere so perhaps they aren’t ALL arrogant, incompetent, elitist boobs.

I simply can’t wait to see what happens when Chet and his wife take their case before a jury. I can only hope that the citizens of Norfolk will hold the Mayor and City Council accountable for the financial hit that we, as taxpayers, are about to take.

More importantly, I hope that the city of Norfolk…both those ensconced in City Hall and those goons who wear uniforms and badges, get the message that we are not going to take this kind of abuse sitting down.