In this edition of CZ-82 Gunsmithing, we’re going to perform a basic trigger job (I was initially going to begin doing the reassembly posts, but this became long enough as it was so I decided to wait on that).

Disclaimer: I am not recommending that you perform this task yourself. I am only recounting what I did. This is very delicate work requiring extreme patience and care. If it is done incorrectly, it could make the pistol unsafe and/or inoperable. I am not a professional gunsmith so I cannot guarantee that any of the methods that worked for me are the “correct” methods or that there isn’t a better way. This post is for informational purposes only. Any actions that you take, and harm of any type that may result from such actions are your responsibility alone.[/Disclaimer]

The trigger pull is one of the most important considerations in accuracy with any firearm. There are several aspects of trigger pull that can be addressed in a comprehensive trigger job.

The take-up is the slack in the trigger before it engages the sear. This aspect is only really applicable in single action firearms as the “takeup” portion of a double action trigger cycle incorporates the motion that cocks the hammer and (in a revolver) rotates the cylinder.

Basically, the only way to adjust the takeup is to change the distance that the trigger must travel before the operating mechanism contacts the sear. On some firearms this is easily accomplished, on some it is impossible without replacing, modifying or manufacturing parts.

I was satisfied with the takeup of my CZ, so I didn’t even attempt it on this firearm.

Another aspect of the trigger pull is the pull weight itself. This is a measurement of the maximum amount of force required to be applied to the trigger in the process of releasing the hammer. It is usually (at least in the US) measured in pounds of force. The pull weight can be affected by many things, but is primarily dependent upon the springs in the action. The trigger spring, the sear spring and the main spring all tend to resist movement of the sear and contribute to pull weight. Some springs may be replaced by lighter weight replacements. Some may be adjusted by removing coils or grinding the spring itself to reduce the thickness of the coils. It is very important not to remove too much too quickly. Removing coils can result in a spring that is too short to be effective. Lightening springs too much can result in light hammer strikes or failure of the trigger or sear to reset.

Pull weight may also be affected by the hammer to sear engagement angles. I’ll discuss that further when I discuss that aspect of the trigger job.

Next is Creep. Trigger creep is felt when the sear is actually moving but the hammer has not yet been released. This is typically one of the most easily adjustable aspects of the trigger/sear relationship. It is adjusted by changing the amount of sear engagement. The goal is to have zero creep. This is not always possible with every design so minimizing creep and making any existing creep as smooth as possible is of paramount importance.

At the end of the creep, is the letoff. The letoff should be immediate, sharp and crisp. This results from clean angles and sharp contours on the sear/hammer contact points. Burrs, rounded edges and uneven angles result in gritty, mushy or inconsistent letoff.

Again, the overtravel was acceptable on my CZ so I didn’t even evaluate how it could be adjusted.

The two things that I wanted to adjust were the amount and smoothness of the creep and the letoff. Before this work there was considerable ceep and it was gritty and rough in feel. The letoff was also not crisp, but felt “mushy”. In “cleaning up” those two aspects, I also reduced the trigger pull slightly but that was not a major concern.

Before we can talk about how to adjust these issues we have to understand how the CZ trigger works. These pictures are not perfect, as they were (obviously) taken with the hammer and sear removed from the pistol and I had to paste them together for illustration purposes…but they should give you an idea of how they work together.

NOTE: These pictures have been edited and, in the process, some of the edges have become blurred. They are only to give you an idea of the areas that need to be worked on, not what they should look like when completed. If I ever disassemble my CZ again, or buy another one that needs to be worked on, I’ll try to get better pictures. [/Note] 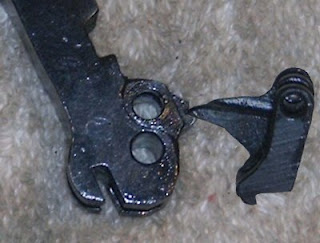 This represents how the hammer and sear are seated with the pistol cocked, when installed.

the sear was actually pasted into the photo and my picture of the sear was in the wrong orientation so it is “flipped” and actually a mirror image of what it would actually look like.

This shouldn’t matter because the area of interest is the contact point between the hammer and sear. This picture shows how they are seated, even if it isn’t perfect. 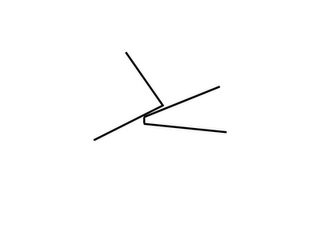 This animated gif (click to make bigger and see animation) is in the same orientation, but only shows the contact points. Please forgive the rudimentary graphics…that’s the best I can do with my limited artistic ability.

If that explanation is not clear enough, let me know in comments and I’ll see if I can come up with a better explanation with illustrations.

At any rate, the more positive the engagement, the stiffer the perceived trigger pull will be as a result of the hammer having to be pushed back against the force of the main spring during sear release…so you want the engagement to be positive…but very slightly so.

The type of engagement is controlled by the angle of contact between the sear and the hammer. Typically the surfaces should be matched so that the angles fit together as smoothly as possible, but this is nigh unto impossible without special jigs to perfectly match the positions that the hammer and sear will be in when installed. I’ve found that, if all of the surfaces are properly polished and the angles are straight, the angles matching perfectly is less important…at least on the few firearms I’ve done trigger jobs on…and every one is different.

In order to make for the best trigger pull, the contact surfaces must be polished as smoothly as possible and the hammer/sear engagement should be VERY slightly positive. 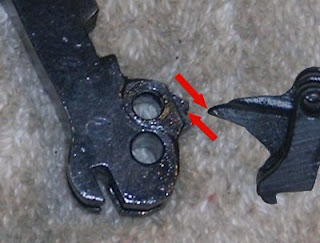 To this end, I first adjusted the contact angle. With this hammer/sear configuration, the angle of the contact point on the hammer has the most control over creating positive engagement. The problem is that the notch on the hammer that the contact point is inside is very small and hard to get into. I ended up using some fine emory cloth wrapped around a the blunt end of a fine exacto knife blade to fit in there well enough to remove material. A wedge shaped fine stone would have worked better, but I don’t have one…yet.

Patience in this evolution is the key. If you take off too much, you can’t put it back.

What I found was, I could put the hammer and sear back into the pistol during the process, “pin” them in place with small pin punches and put pressure on them with my fingers while moving them to immediately see the results of my work.

Make a few strokes, put them in and test them. Take them out. Make a few strokes. Rinse, Lather, Repeat…until I got it right where I wanted it. The movement of the hammer to the rear as the sear is moved should be visible under magnification, but barely perceptible, if at all, with the naked eye.

It is also very important that every stroke with the abrasive be at the same angle, changing angles between strokes will cause uneven surfaces and a “gritty” or rough feel to the trigger pull.

Once the angle is correct and the surface is completely even and flat, the next step is to polish the contact surfaces of both the sear and the hammer with the finest stone or emory cloth available and then finishing with polishing compound on a polishing wheel in my dremel tool. That also was challenging because of the angle and size of the hammer notch, but with patience, I got it done.

It is extremely important to maintain a nice sharp “edge” on the end of the sear where it contacts the hammer. It should contact the hammer notch all the way across its width evenly and be perfectly straight.

I always use magnification when doing this fine work so I can see as much detail as possible. I picked up a variable magnification “head strap magnifier” from Harbor Freight tools on sale for $4.99 over a year ago. The lights don’t work very well, but I don’t need them anyway. Pretty close to the best $5 I’ve ever spent.

Anyway, the key, as I said before, is patience and attention to detail. 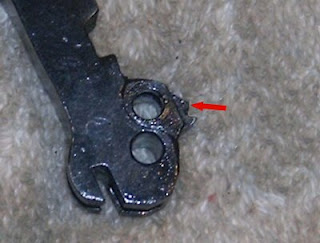 Once this is finished, the creep and letoff were very smooth and crisp, but the creep distance was still too great. I adjusted this by gently stoning down the edge of the hammer notch until the sear was barely inserted into the notch.

The edge of the contact area on the hammer is equally important to keep straight and sharp so be careful, use magnification, take it slow and don’t go too far too fast. With this hammer/sear setup, it is impossible to completely remove the creep and if you go too far, you may make it so sensitive that banging or bumping the gun may release the sear. This shouldn’t cause the pistol to discharge if the automatic safety is in place and working correctly, but it will cause the hammer to fall and the next shot to be double action. Insufficient engagement could conceivably cause “hammer follow” and uncontrolled double taps as well.

After all was said and done and the pistol was back together, I was VERY pleased with the result. The creep is minimal to the point that it is almost unnoticable. The trigger pull is very smooth and the letoff is crisp and clean.