Are some of my newest acquisitions. I’ve commented on a couple of blogs about them, but I’ve never hit the subjects here very hard. In my last CZ-82 gunsmithing post, I mentioned that I bought two more. I won’t post pictures of them because…well, when you’ve seen one stock CZ-82, you’ve seen them all. I do plan to refinish them both though so you’ll get a look at them when I start that process.

I also bought two, sequentially serialized stripped AR lowers. I’ve already built one of them up and I’ve got a post percolating on that build that should be up in a day or so.

Why two CZ-82’s and two AR’s you ask? Well…I have two kids you see, and someday…

Actually, my son already has dibs on my M1 Garand when I die, so I guess his sister’s going to get the Carbine. The rest I haven’t figured out yet. Don’t worry, I’ll work it out somehow.

Anyway, the point of this post: I’ve been wanting a 1911 or a long time. One of the issues that I”ve had with my combination of carry guns is that they operate differently. The Ruger does not have a manual safety. It has a decocker and is intended to be carried in condition two.

The CZ-82 has a thumb safety and I typically carry it in condition one.

What I’ve wanted for a long time to alleviate that problem is a 1911 with an ambidextrous safety. The problem is that I’ve never thought I could afford one reliable enough to be a carry gun.

I started hearing very good things about Rock Island Armory’s entry into the 1911 field and the prices on them are downright tasty. I ended up selecting the “tactical” model which has the lowered ejection port, extended beavertail and skeletonized hammer, along with a few other nice to have bennies…including the main ingredient for me…ambidextrous safety.

I tried not to have too high expectations because at $425, it just seemed “too good to be true” to expect it to be a reliable shooter right out of the box, but I must admit that I was pleasantly surprised. 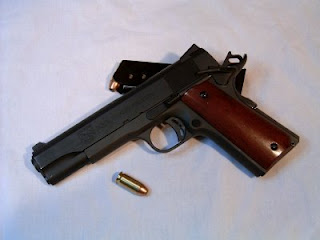 The fit and finish were much better than I expected. I have to admit that the Parkerizing isn’t proving to be as durable as I’d like…I’ve already got some holster wear after a couple of months…but functionally, I couldn’t be happier.

I did disassemble, clean and lube it after getting it home, but I did nothing else to improve reliability. The first time I took it to the range, it ate 100 rounds of my preferred carry ammo, 165 grain speer gold dot JHP (that I get from Georgia Arms for a very reasonable price), without a hiccup.

The follower on the factory 8 round magazine that came with it seemed a little cheesy to me when I first saw it, but it has fed reliably in the few months that I’ve had it. I’ve since bought 4 more Chip McCormick 8 round magazines and all of them have functioned perfectly.

I’ve now fired several hundred rounds of the above mentioned Gold Dot, 230 gr Federal Hydro-shok JHP, and 230 gr Winchester White Box FMJ with nary a problem. Not a single failure so far.

Color me a satisfied RIA customer. The only two things that could REALLY use improvement: The smooth walnut grips, combined with a smooth frontstrap just didn’t give me a good enough grip. I could especially see this causing a problem with hands that are slick for whatever reason. Also, the sights are not adjustable and have no dots. They’re taller and easier to use than stock military sights…but only slightly so. Fortunately, RIA uses a Novak cut so it shouldn’t be too difficult to find replacement three dot adjustable sights when I can afford it. 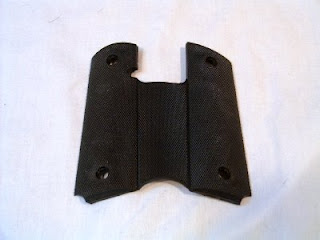 The grips, I’ve already taken care of at least for the time being. At the last gun show (astute viewers of my SKS trigger job video may have noticed the SGK stamp on the back of one of my hands…I had been to the gun show earlier in the day before filming that) I picked up a cheap $11 set of rubber grips attached with a rubber, textured front strap cover.

I don’t have a picture of the pistol wearing her new shoes at the moment, but I’ll put one up when I get a chance. The grips weren’t cut for the ambi safety so I had to slightly modify them, but I bought them for function, not for form. For that purpose, I am extremely happy. They fit very tightly…I had to put the gun in my padded vise in order to get a good enough grip to stretch them across and attach the other side…but that was a plus. That made for a very secure fit. For $11 I think it was a very good investment, at least until I can afford something better.

So now I have two carry guns with very similar control systems. Both have ambidextrous safeties in approximately the same place and that operate in the same manner (down to fire, up for safe). That vastly simplifies my training and alleviates my concerns about “grace under fire” so to speak.

I’m hoping to get my AR-15 build post up in the next few days.