The other parts of this series:

***Update: I forgot to mention that OBVIOUSLY, the next step is actually disassembling the pistol. I’m not going to cover that in this series ’cause we’ve already been there. For a refresher of how to detail strip the CZ-82, go HERE. I did remove the front sight which I didn’t do previously, but it was a simple matter of drifting out the pin and lightly tapping the sight forward and off the slide. Nothing complex there.***

After gathering all the equipment, the next step is metal preparation.

That entails bead blasting and thoroughly degreasing the metal surfaces that are to be parkerized.

This stage is the most critical in that the preparation of the metal for parkerizing is what determines how smooth, uniform and thoroughly the parkerizing solution will electrochemically convert the surface of the metal into the corrosion resistant substance that is desired.

One thing that you most definitely don’t want to blast or parkerize is the bore and chamber. To protect them while blasting and parkerizing, I bought a piece of 1/2″ dowell rod to plug the ends with. Of course, 1/2″ is way too big so I had to reduce the diameter of the rod to fit into the bore and chamber. 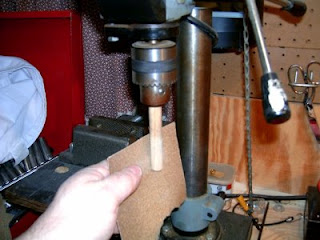 To do this uniformly, I cut the dowell rod into two sections about 4″ in length, chucked them into my drill press and used sandpaper as they were spinning to reduce them into a semi-cone shape that would fit securely into the muzzle and chamber. 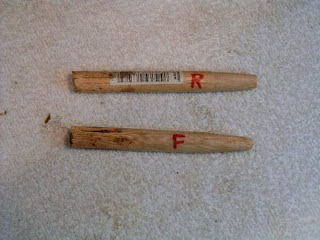 Then I cut them down to about 1 1/2″ in length for use when blasting and parkerizing. I didn’t take another picture after cutting them to length, but I’m sure you can imagine it.

The one marked “R” is the chamber end. You’ll notice that the “ramp” isn’t as steep as the one for the muzzle end and you may be able to tell that there is a bit of a “lip” from the sanded portion to the body. I did this to help block the blasting media from the feed ramp and the edges of the chamber as well as from getting into the chamber itself. 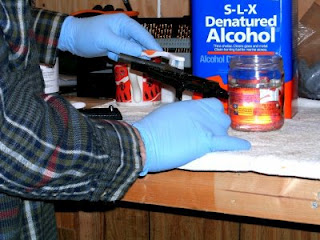 The next thing I did was clean all the parts that were to be blasted with denatured alcohol. I like denatured alcohol for this because it is a pretty reliable solvent/cleaner/degreaser but it dries quickly and doesn’t leave a residue. I’m going to clean and degrease the parts more thoroughly before parkerizing, but cleaning before blasting helps to prevent contaminating the blasting media with oil or grease.

From this point on, I never handled the parts with bare hands. I used the nitrile gloves, the sandblasting gloves inside my makeshift cabinet, or the rubber chemical gloves. 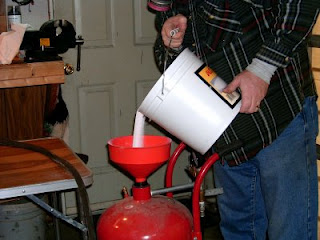 Always wear a respirator when blasting. Even though the glass beads are non-toxic, they can still be a pretty severe irritant and can cause you to go into respiratory distress. 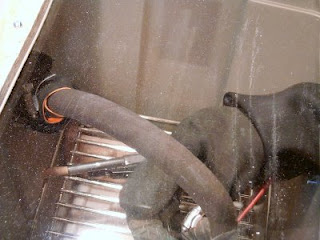 From there, the blasting part is pretty straightforward. 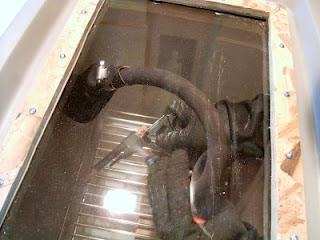 The metal grate in the bottom is just some metal shelving material. I’ve got it nailed to a couple of 2×4’s on edge to hold it up off the bottom of the tub. This keeps the work off the bottom so that the used media has somewhere to go and doesn’t cover up any pieces you have in the box waiting to be blasted.

I didn’t take a picture of this, but I used a small magnetic parts tray to hold the small parts so they wouldn’t be blowing around in the cabinet and I used a pair of needle nose pliers to hold onto the small parts while blasting.

I, of course, dropped some of the small pins and parts while working with them…that’s another advantage to using the cabinet; dropped parts are contained in the tub. When I emptied the media from the tub back into the blaster, I ran it through a piece of screen which not only helped keep from contaminating the media but also allowed me to find any parts that I’d dropped while working. 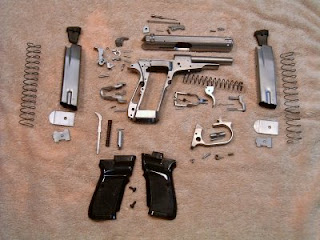 And here is the end result: one naked CZ-82.

As I mentioned before, there were some parts I didn’t blast and parkerize. Those included the springs, the extractor, the firing pin, the bore and chamber (of course), the locking tab on the safety, things like that.

I know I promised the whole process start to finish, but the post would just be too long to do it all in one so I’m going to close this one and continue in another post.