This time we’re going to install the delta ring assembly and the barrel.

One of the major differences between a National Match rifle and a standard AR-15 is the addition of a free float tube.

Basically, what this entails is attaching a rigid tube from the front of the barrel nut to just behind the front sight. The hand guards and sling swivels are attached to this tube, rather than to the front sight base. The idea is that, when properly using the sling, there is a lot of tension on the front sling swivel. on a standard AR, this tension can cause the barrel to flex. With the barrel “floating” inside this tube, no pressure, either from the hand guards, or from the sling tension, is placed on the barrel, but is taken up by the float tube, allowing the barrel to resonate naturally with each shot, thereby improving accuracy.

You can free float any AR and improve accuracy, but it is most common on match rifles. With match rifles, also, it is important that the external appearance of the rifle remain stock. Free floating the barrel is an accepted modification, but you have to use standard handguards. 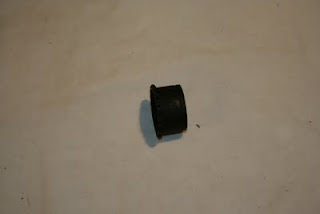 The free float tube comes with a special barrel nut that is different than a standard nut.

The standard barrel nut is only threaded on the inside where it mates with the upper receiver and does not extend past the gear-like “head”. 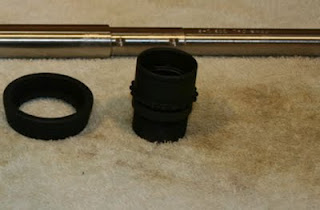 The barrel nut used with a float tube, on the other hand, looks the same up to the “head” but extends past that area and is threaded on the outside. Those extended exterior threads are what the float tube screws onto.

Notice the groove machined into the unthreaded part of the barrel nut on both the standard style, and the free float tube style barrel nut.

The barrel installation involves the special barrel nut, the barrel and the three components of the delta ring assembly: delta ring, weld spring and snap ring.

The barrel installation itself is identical whether using a float tube or not, the only difference in this part of the assembly is which type of barrel nut is used. 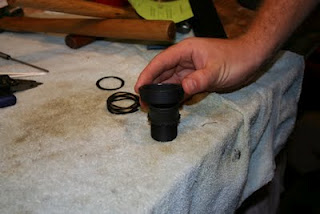 First, the barrel nut should be placed on the bench with the exterior threaded part (or the “head” with a standard barrel nut) down. 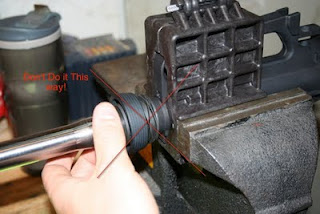 We actually installed the delta ring backward initially. I thought it looked funny, but I couldn’t quite pinpoint why. Everything fit fine (although it was harder than it should have been to torque the barrel nut with the delta ring in the way) and we didn’t realize what the problem was until we tried to install the handguards…which wouldn’t fit.

This is what it looks like with the delta ring installed backward.

It shouldn’t look like this. If you can see the weld spring, you did it wrong. 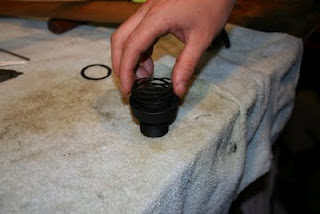 Next, the weld spring goes over the barrel nut and should fit down inside the delta ring. 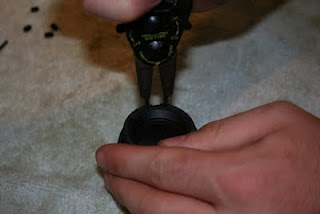 You’ll have to compress the weld spring a little to get the snap ring on, but it isn’t very hard if you use a properly sized set of snap ring pliers.

You can probably do it without the pliers, but they make it much easier. 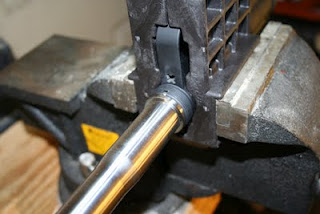 The indexing pin in the barrel extension should seat fully into the notch in the upper receiver threads. 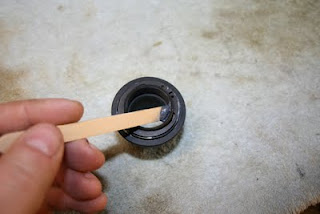 Next, grease the upper receiver and barrel nut threads with a good molybdenum disulfide grease.

Popsicle sticks can really come in handy…and they’re cheap. I bought a bag of 250 for a couple of bucks a few years ago and still have probably half the bag left. 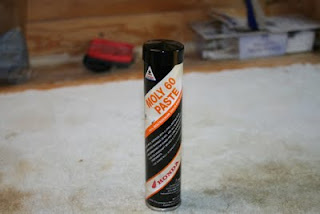 There are as many opinions about what kind of grease to use as there are AR-15’s in the world. As a Honda motorcycle owner, I just happened to have a very good Moly-B (that’s what we used to call molybdenum disulfide based grease in the Navy) that’s used on the drive shaft splines of my bike. That’s what I used. 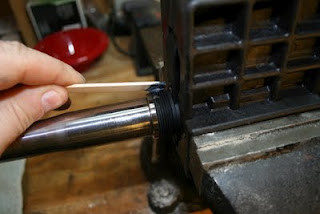 The only real dire warning I’ve found about the grease selection is to not use grease with graphite in it because graphite can act as an electrolyte and increase the chances of dissimilar metal corrosion due to the barrel nut being steel and the receiver being aluminum. 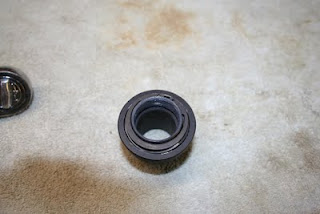 I have no idea how valid that concern is but it was something I ran across when researching this project.

After applying a little grease with the popsicle stick, I used a rag to even it out and remove excess. You don’t need a lot, just enough to put a light coat on the threads. 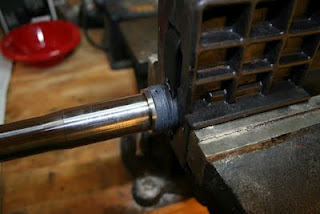 The purpose of the grease is to act as an anti-seize compound and to prevent galling of the receiver threads while tightening the steel barrel nut. 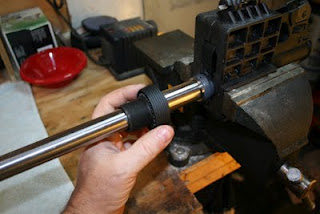 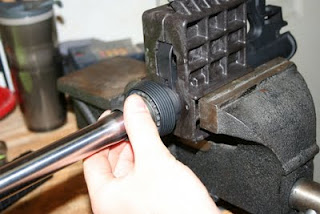 Thread the barrel nut onto the receiver threads and hand tighten. 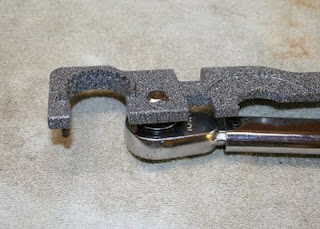 The next step is where the AR-15 multi-tool was critical.

There is a square hole in the center of the multi-tool just behind the barrel nut part of the tool. That hole is designed for a 1/2 inch drive torque wrench to fit.

The barrel nut should be tightened to a minimum of 30 pound feet and a maximum of 80 pound feet.

Now…I probably went a little overboard, but knowing that using an extension alters the actual torque from the setting on the wrench, I used the magic formula to make sure the torque setting was accurate:

Since we’re using pound feet, all measurements have to be in feet. 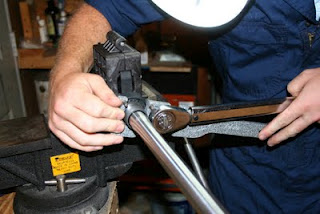 So, I set the torque wrench to 27 pound feet rather than 30. Not a huge difference, as I suspected, but better safe than sorry right?

After the nut is tightened to the minimum torque, the next step is to see if you have a notch in the barrel nut “head” aligned with the gas tube channel. 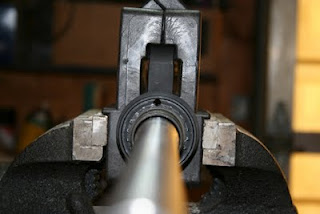 You’ll probably have to move the snap ring, the weld spring and the delta ring in relationship to each other to line up all three of the channels with the barrel nut.

A dental pick or “L” shaped allen wrench works well for this.

A good way to check the alignment is to stick the gas tube through the channel and see where it points.

If the tube doesn’t point straight down the barrel centerline, then you’ll need to turn the barrel nut more to get it lined up.

I had an extra gas tube to use because the float tube came with its own gas tube. I just left the tube in place while turning the barrel nut so I’d know as soon as it lined up. I wouldn’t do this with the gas tube I’m going to install because I’d be afraid of it binding and being bent or crushed. If you don’t have a spare gas tube, a piece of thin dowel rod or something like that would work just fine. 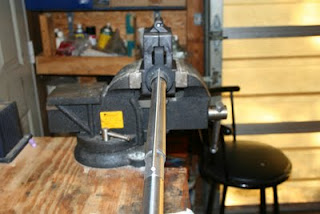 If you reach the max and haven’t gotten the gas tube aligned, stop, loosen and try again. Torque to 30, then try to align the gas tube notch without over torquing. If you still can’t get it, I’d say having it a pound or two under torqued would be better than over torquing it. I’d be very leery of damaging those aluminum threads on the receiver.

If you do have to under torque the barrel nut, I’d check it regularly to be sure it’s not backing out and crushing the gas tube.

After the barrel nut is torqued, the barrel installation is complete. 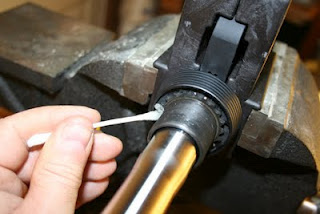 I did hit the barrel nut with some cold blue after torquing. The multi-tool had scraped the finish off of some of the crowns of the nut and I didn’t want to leave them bare.

No progress picture for you this time…I forgot to take one until after we had the float tube on.

I obviously need more practice at this stuff.

I was originally going to include the float tube installation in this post, but it was getting too long so you’ll just have to be patient.

Next time we’ll install the free float tube and the front sight base.