Now that the series of posts on assembly for my National Match AR-15 build project is done, it stands to reason that I need to let everyone patient enough to slog through all those very detailed and meticulous posts know how she shoots.

First a little background. I had heard that new match barrels need to be “broken in” so I did some research on that subject before beginning. It seems that there are as many opinions on that as there are on every other aspect of guns and shooting.

In summary, after all my research, I still don’t know what the “proper” barrel break-in procedure is or even if there really is one.

Well, I couldn’t find any match ammo to shoot so I was going to have to settle for cheap range ammo to start out with anyway, so I decided to go ahead and do at least some break in. 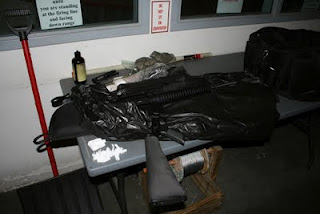 I went to Camp Allen Weapons range during a time that I thought wouldn’t be too busy (I was right…only one other guy in the bay with me and only for a short time), set up my cleaning station. 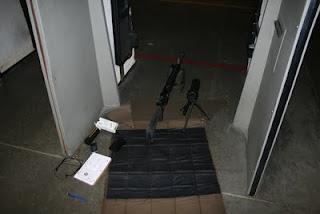 Set up my shooting position.

And went to town. 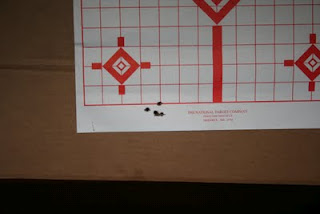 Here are my first five shots, stopping and cleaning between each shot (yes, I used a brush).

I must say, for cheap 55 grain range ammo, shooting one round at a time, getting up, cleaning and then shooting the next round, I couldn’t be happier with that group.

I was using a 6 o’clock hold for the large center diamond, which put me 7 inches low and about 3 inches left.

After adjusting the front sight post a little, I didn’t know where I was going to be, so I needed to shoot another group to check elevation, but I could at least try to adjust the windage. Let’s see…1MOA at 25 yards is 1/4 inch. I’m shooting 3″ left so I need to move the point of impact 12 MOA right.

One very important aspect of a match rifle is how accurate the click adjustments are on the sights. You don’t get a chance to verify adjustments during a match so you need to know that when you dial in a certain adjustment, that’s what you’re going to get on the Point of impact.

So, with 1/4 MOA sights, a 12 MOA adjustment is 48 clicks. Whew…that’s barely in the adjustment range.

OK…now that I’ve made my first adjustment, it’s time for another 5 shot group. After cleaning between each shot for the first 5 shots, I’m really not seeing any significant copper fouling. A little to be sure, but nothing significant. I think it’s safe to start shooting 5 shots between cleaning.

The second 5 shot group was almost perfectly centered right to left. That tells me that the windage adjustments are accuarate and I can trust my math when making adjustments. That’s great news!

I was still about 26 MOA low though. I wasn’t going to futz with the front post any more without the proper tools, so…I need to move my POI 26 MOA up, that’s 104 clicks.

After cleaning, I shot another 5 shot group: almost exactly where I expected it. Grouped just a little high but almost perfect. OUT STANDING. 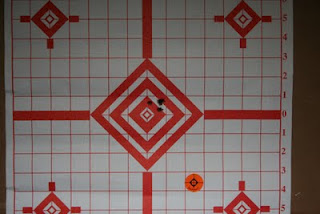 I decided to shoot one more group on a clean target to finish off the box of 20 and “for record”. I cleaned one more time, set up…and this is what I ended up with.

Using cheap ammo from nothing more than a rudimentary rest and without even having the sights dialed completely in yet.

That was the day that I got my gunny body art by the way.

I took her to the Airfield shooting club last weekend and put another 20 rounds downrange and got the FSB windage at least in the ballpark, and I cranked the front sight post down 4 or 5 turns to get the point of impact up a bit. I didn’t take pictures that day because I was just too tired after being out there all day.

Today I went back to the indoor range to verify my FSB adjustments.

Still gonna need some fine tuning after getting the right ammo, but it’s really starting to come together. 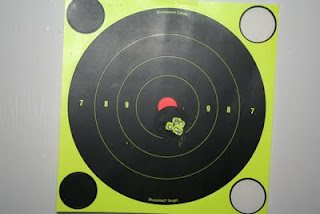 here was the last group of 5 (out of another box of 20) that I shot today.

But the main thing I’m happy about was the groups I was getting tonight. 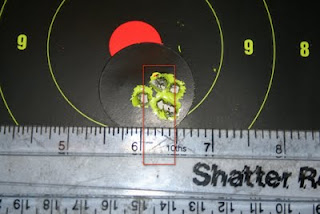 That one looks to be slightly less than 1/2 an inch.

Call it .45 inches from center to center of the largest spread. I used a box to mark it to make sure the lines were straight down.

Less than 2 MOA accuracy already with crappy ammo that’s really too light for the barrel twist rate from a makeshift rest and without even having the sights all the way dialed in yet.

I think I’ve achieved everything I’d hoped for when I first started contemplating this project.

I’m confident that, with good ammo and from a proper, stable bench rest, I’ll be able to get sub-MOA groups out of this rifle.