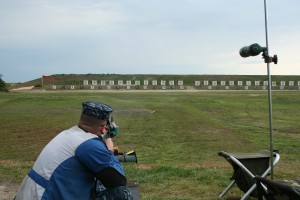 The Navy matches are considered teaching matches.  New shooters are welcomed and highly encouraged to participate.  Most shooters have at least some equipment, but spotting scopes and stands, shooter stools, shooting jackets and gloves, and even rifles, are provided for those that need them.

Although I don’t feel like it since I haven’t competed in a match in four years, I was considered an experienced shooter and was paired up with a new shooter. 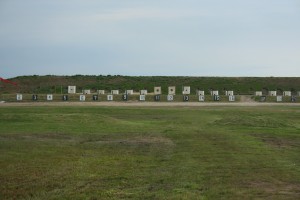 Luckily for me, my “new shooter” was a Naval reservist who was a prior Marine and already knew how to shoot (in fact he shot better than me the first day) but just needed some help with the finer points of match procedures, documenting scores on the scorecards, things like that.  To be honest, there was a lot about that kind of thing that I didn’t remember myself and had to defer to other “old hands” about many of those issues as they came up.

But we muddled through pretty well.

As I hinted at before, I got permission to take pictures, but they were pretty reluctant so I was very careful not to be too obtrusive about it.  Not only that but I was busy keeping score and providing what meager help I could to my “new shooter” so I didn’t get many.  I also wanted to concentrate on shooting so I put the camera away after first day on the 200 yard line and didn’t take any from 300 or 500.  Next week I’ll try to get at least one shot of the targets from the 500 yard line (NRA standard is 600 yards, but there’s a road in the way at Dam Neck so the long line is 500 yards there) so you can get an idea of how small they look from that distance. 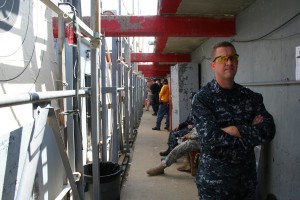 One of the integral parts of shooting on a range like this is running “the pits” for the other relays of shooters.  When you’re shooting targets 200, 300 and 500 yards away, it would get pretty onerous to have to walk to the targets to score and repair them between each string of shots.  While some of the shooters are on the line shooting, others are in the pits running the targets up and down, marking the hits and patching the holes after they’re scored.

It’s a lot of work running those carriages up and down and up and down and, during the slow fire stages, you’re expected to hear the shot that hit your particular target, pull the target down, patch the hole from the previous shot, mark the new hole with a shot marking disk called a “spotter”, mark the score of the shot with another scoring spotter and get the target run back up, in less than 18 seconds.  You do get into a rhythm after a while and get pretty good at it, but it’s a lot of work. 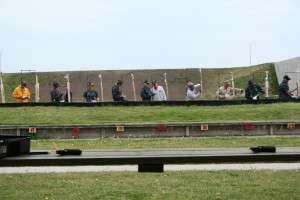 Although Rifle is what I tend to focus on, there are also pistol matches conducted at the same time.  These are standard “bullseye” style service pistol matches and most people use match tuned, but otherwise government issue 1911A1 .45acp pistols.  Match grade Baretta M9 pistols are also authorized, but are surprisingly (considering that the 1911 hasn’t been issued to troops for close to 20 years) rare.

Bullseye pistol matches are quite a bit different from the “practical” shooting disciplines. The match is shot one handed, standing, unsupported. 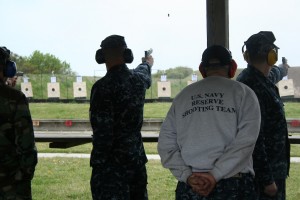 As with the rifle matches, pistols are also available for issue and instruction for new shooters is provided. 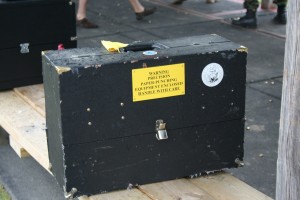 Of course, one of the many advantages to having your own equipment is that you can personalize it to your heart’s content. 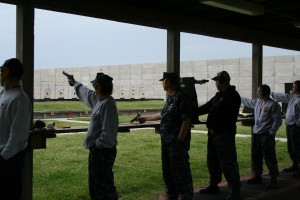 And for those who doubt that women can effectively use a large caliber pistol like the 1911, I imagine that the Commander to the left of center in this picture would beg to differ… 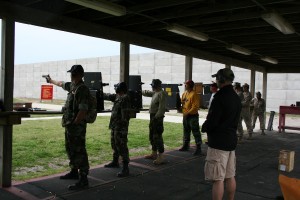 As would the young Marine that was on the extreme right end of the line in this one.

I really didn’t get a good picture of her, but she was about 5’5″ tall and probably 110 pounds soaking wet…and was handling a 1911 with one hand, shooting full power 230 grain ball ammo,  like it was nothing.

The guy in shorts in the foreground, by the way, was one of the Marine range safety officers.  They volunteered to run the ranges for us through the week, including over the weekend that they otherwise would have had off.  They were afforded the opportunity to wear civvies in “payment” for their generous donation of valuable time.  My hat’s off to them.  They were extremely professional and run an excellent, safe and organized range. 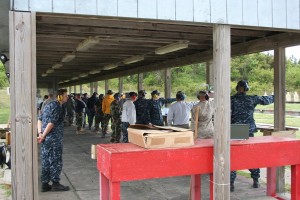 Ready on the right…

Ready on the left…

All ready on the firing line. 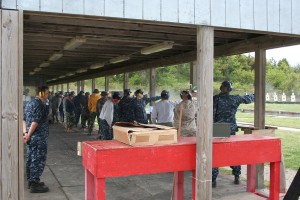 All in all, having to get up at an ungodly hour in the morning notwithstanding, it was a great 5 days of shooting and I’m looking forward to the All Navy match starting on Saturday.

As far as how I did.

Not as well as I’d have liked.

I had hoped to do better than that this year, but I can say unequivocally that it wasn’t the rifle’s fault.  It has exceeded my expectations from when I first decided to put together a match rifle out of the lower I had languishing in the gun cabinet.

I was “calling my shots” during slow fire…basically, you take a mental snapshot of the sight picture as the shot breaks.  If you’ve got the sights adjusted and aligned properly, wherever the front sight is on the target when the shot breaks is where it’s going to hit.

I was calling my shots very accurately.  I only mis-called two shots in the 75 or so rounds of slow fire that we sent downrange.  The rifle was poking the holes where I was pointing it…I just need to get WAY better at pointing it at the X in the center.

I simply don’t practice enough.  But that’s a deficiency that’s easy to fix.

During the rapid fire stages, I kept having stupid bonehead things get me flustered and make me rush.

The rapid fire stages require you to start from a standing position, then get down into the required shooting position (sitting or prone) after the clock has started.  Also, you start out with the magazine inserted, but the bolt closed on an empty chamber.

It was always something.  Once, I forgot to rack the bolt to load a round, got in position, all lined up, taking my time, pulled the trigger and “click”.  CRAP!

One time I almost fell down while standing, lost my balance and was all out of position so I had to completely reset after the timer started and we could get into position. Having to find my natural point of aim and get back into position cost me time so I rushed while shooting and was all over the place.

Once, in sitting, I forgot to unhook the bottom two fasteners on the shooting coat so I could hardly breathe when I got into position to shoot.

None of those are excuses.  Each and every one of them was a stupid mistake that was completely my fault and were completely the result of not practicing enough.  All of those actions should be so natural and automatic that there should never be any doubt.  But I screwed them up and my shooting suffered as a result.

I can’t express enough that, regardless of your chosen shooting discipline, or even if you only shoot for fun, practice is the key to proficiency.

To end on a positive note, one thing I did well is read and judge the winds and sight settings.  The only stage I had trouble with was the long line in the EIC match.  The winds on Tuesday were gusting and swirling and constantly changing and everyone had trouble with them so I wasn’t the only one.  To give you an example, when I shot at the 300 yard line, the flags down by the targets were pointing to the right and indicating about 5 mph winds.  I used one minute of left wind and was right on the money.  My group sucked, but it was centered on the X ring.

By the time I humped my gear back and settled in on the 500 yard line, the wind was completely opposite…the flags at the targets were now pointing left and showing 5 MPH or so.  In about ten or fifteen minutes, the wind had completely shifted direction by 180 degrees.

While I was shooting my 20 shot string from 500 yards, the prevailing winds shifted at least three times, requiring me to adjust for the shifts after seing my point of impact moving around on the target.

It was a tough day for everyone…but I think I did as well as anyone in reading and adjusting for the winds so I’m pretty happy with that aspect of my week anyway.

And hopefully, I’ll do better next week.