I had the honor Tuesday and Yesterday of participating in the tribute to of one of our Nation’s heros. Cpl Joshua Stricklen of Virginia Beach, VA was laid to rest at Colonial Grove Memorial Park.

For information about Cpl Stricklen as well as comments from friends and family please see here.

I didn’t personally know Cpl Stricklen, but I don’t need to have known him. All I need to know is that he risked, and ultimately laid down, his life for his fellow countrymen. Whether one agrees with our engaging in the war against Islamic Extremism or not. Whether one supports our Government’s actions or not. Whether one believes that the military planning and execution has been performed well or not: One cannot deny the dedication and sacrifices of the young men and women with their boots on the ground. One cannot deny the courage and selflessness with which they and their families serve and one cannot deny the debt of gratitude that we as Americans owe them.

I never fail to be moved to tears by these ceremonies and this one was no different. 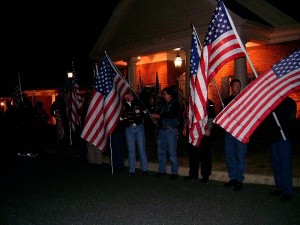 The mission started with a vigil at the viewing Tuesday evening. We had a decent showing with about 15 bikes and 20 participants.

It was chilly but but not a complaint was to be heard. We all lined up to pay respects when the family arrived and then ran shifts to ensure that the vigil was maintained throughout the duration of the viewing. 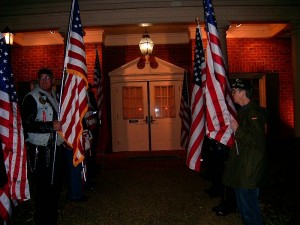 We all manned up again at the conclusion to again pay our respects upon departure of the family. Cpl. Stricklen’s wife and a couple of other family members didn’t want to leave him alone so they stayed at the funeral home through the night.

As the rest of the family departed for the evening, An aunt of Cpl Stricklen made a point to approach several Patriot Guards (including myself) to express her thanks. The tears flowed feely as her heartfelt gratitude was expressed with much appreciated hugs and kind words.

The next day’s ceremony was in the afternoon requiring some logistical gyrations to get time off work. Considering that it was during the workday, we had a pretty good turnout. I believe the final count was 18 bikes and three cages and somewhere around 30 participants. 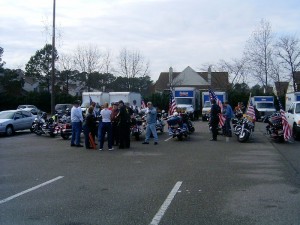 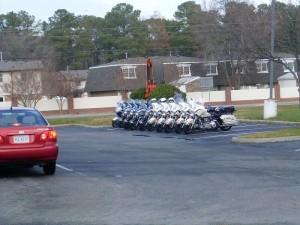 I thought it was interesting that the Police motorcycle escort chose the same parking lot as a staging area as we did. Great minds think alike and all that.

I was very happy to see the large police escort presence. The Police originally requested Patriot Guard riders to assist with traffic blocking duties (we have done this in the past with good results) but they decided that they had enough uniformed officers to do it and so we all were able to participate in the escort ride. 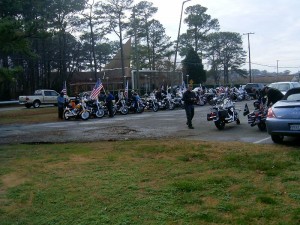 The funeral was held at the Little Creek Amphibious base Chapel. We parked in the parking lot and then took up our silent vigil outside the chapel.

The ceremony lasted a bit over an hour. The sad wailing of bagpipes emanating from the chapel was a poignant reminder of the solemn nature of the occasion. 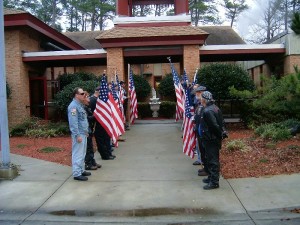 Following the service, we took up our position in the funeral procession immediately preceeding Cpl Stricklen and his family. I cannot express how gratifying it is to be afforded the great honor of escorting the hero to his final resting place. 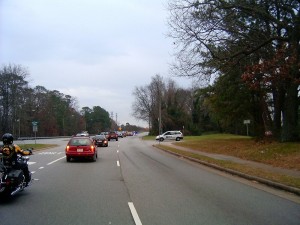 To me, this is the most moving part of our duties. The nuts and bolts of standing guard for the family and friends of the fallen hero is gratifying to say the least, but the honor of riding escort on this portion of the ceremony is, for a reason unknown even to me, simply emotional beyond words. 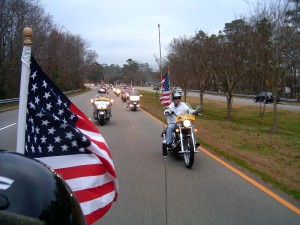 I never have pictures of the family, of the casket or of the graveside service because we are not there on a sightseeing mission. We are there to honor the fallen and the family. During the ceremony and any time the family is present, the cameras get put away and we stand our vigil. This is as it should be. As much as I would like to have pictures of some of the more moving events, it simply is not what we are there for and my desire for memorable pictures must, of necessity, take a backseat to the mission and to the Honor and Respect that the fallen and his family deserve. 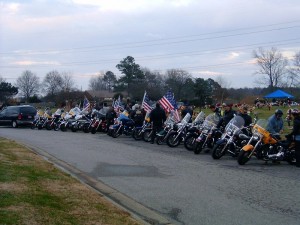 Following this ceremony we had a short debrief during which Cpl Stricklen’s Commanding Officer (a Colonel who’s name has, unfortunately, escaped me), approached us. He effusively thanked us for what we do. Several family members and friends also thanked us at various times. This has occurred at every one of these missions I’ve been privileged to attend.

If any of the family members, friends or shipmates of Cpl Strickland happen across my humble blog I would like to pass on one message.

Your thanks are much appreciated but absolutely uneccesary. I, and I think I speak for all PGR members in this respect, am honored by the invitation to participate. It is an absolute privilege to be allowed the opportunity to pay our respects and give back in our insignificant way some small measure of the sacrifice made by Cpl Stricklen and his family. It is absolutely the least we can do and WE thank YOU from the bottom of our hearts for thinking enough of a bunch of scruffy bikers to allow us to support you in any small way we can. 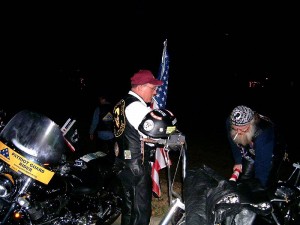 I do have one final picture that I want to share. On the left in the red hat is Woody “Rustpicker” Wagner. He is the Tidewater area ride captain. The amount of effort he puts into organizing and leading these rides is unimaginable. I wanted to point him out because of the effort he puts into this worthy cause and to mention that he, in my mind, is a hero in his own right.

Rustpicker is also a veteran and is a member of the Combat Veteran’s Association. For his service while on active duty and now, in support of our latest generation of heros, I salute him.