There’s an old Navy joke: What’s the difference between a Sea Story and a Fairy Tale?

A Fairy Tale begins with “Once opon a time…”

A Sea Story begins with “This is a no shitter…”

Mr. C posted a picture of a TF-9J hanging from the Flight Deck of the USS Lexington and asked if anyone had any more info. I speculated about it a little but didn’t have the details. You could probably get the official mishap report from the Naval Safety Center with a Freedom of Information Act request and the bureau number (on the side of the aircraft) but I doubt that it would reveal anything earth shattering.

The fact is that we lose Naval aircraft relatively regularly. An aircraft carrier at sea is a dangerous environment. The flight deck of a US Aircraft Carrier during flight operations has been described as the most dangerous four and a half acres on the planet. To the uninitiated it looks like utter and total chaos with turning aircraft parked, taxiing or being towed within inches of each other. Persons in multi-colored “float coats” and helmets running hither and yon. Fuel hoses and electrical cables strung across the deck intermingled with countless tie down chains, wing struts, test and support equipment, etc etc etc.

One of the first lessons you pick up…before even being allowed on the flight deck for the first time…is to “keep your head on a swivel”. You MUST be constantly aware of what is going on around you. It takes no time at all to be sucked into an intake, knocked over by a wing or tail, blown across the deck by jet blast or rotor wash, squashed by a trundling tow tractor or power cart, or…possibly worst of all…hear the dreaded call over the “5MC” flight deck speaker system: “You…green shirt…on the starboard side by the foul line…report to Pri-Fly on the double”. That means you REALLY screwed up and were about to have your a$$ chewed by one of the best…the Air Boss. 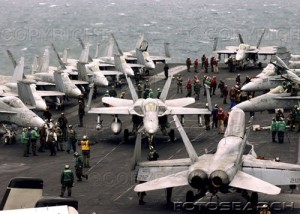 Another thing you learn quickly: you listen to what the old timers are telling you. If someone says run…run. Don’t look around, don’t ask why, don’t duck…RUN! If someone says, duck. DUCK. If someone says don’t move, you had better pretend to be a statue until someone says otherwise. Failing to follow the instructions of the people who know what they are talking about can make you very dead very quickly. Generally, death or injury on the flight deck is a relatively messy affair. Lots of fast moving sharp edges and pointy objects whirling around.

But once you get the hang of the ebb and flow. Once you start understanding what everyone is doing and why. You soon realize that the deck is not chaotic at all. It’s like an intricate dance within which everyone has a part. With that said, however, in a fast paced, dangerous environment like that, mishaps do happen. Whether caused by equipment failure or malfunction, incorrect procedures, fatigue from people having spent the last 14 hours doing the job, or simply someone letting their guard down for that crucial split second…it happens.

Sometimes we lose aircraft over the side. The deck is almost always wet; add to that hydraulic fluid, fuel, myriads of oils, cleaning compounds etc etc that get dripped, spilled or leaked onto the deck and it can make for a very slippery surface…even with the non-skid compound used to give traction. Now consider that the aforementioned slippery deck is mounted atop a ship’s hull which, coincidentally, is plowing through ocean waves…i.e. rocking and rolling. Further consider that the deck enjoys no protection from the winds that can approach 60 knots on a regular basis. Now imagine attempting to move a 50,000lb+ aircraft around the deck under those conditions. The fact that we lose the occasional aircraft is not the amazing thing. The amazing thing is that there are any aircraft left at the end of any given deployment to bring home. The fact that these occurrences are as rare as they are is a testament to the skill and ability of our fighting men and women of the sea. 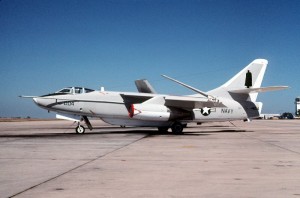 Now on to my story. This occurred on a Med cruise in my very first command. I was stationed at VQ-2, Rota Spain and we flew the mighty EA-3B Skywarrior (affectionately known as “the Whale”). 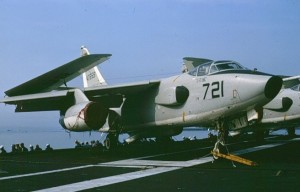 One of our A-3’s was parked Tail Over Water (TOW). In order to save space, the aircraft in certain areas of the ship are parked with the rear of the main landing gear (MLG) wheels almost up against the “scupper” or metal lip that surrounds the flight deck. Because the MLG are so far forward, that means that part of the tail sticks out over the water. 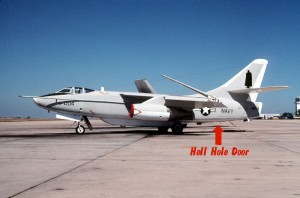 On the EA-3B there was an electronics compartment in the tail called the “Hell Hole”. There was a hatch in the bottom of the tail with a small fold-down ladder used to climb up into it.

In this case, because of the way the plane was parked, the hell-hole was barely over the catwalk (the walkway that surrounds the flight deck…on the other side of the catwalk rail is a straight drop to the water). Basically, with the hell hole hatch open and ladder extended the ladder hung several inches past the catwalk rail out over the water. I suppose I should have requested that the bird be moved so that the hatch was over the deck for safety…but heck, I was brave and it was a simple task I needed to accomplish. A piece of safety wire had broken on one of the electronics racks and I needed to replace it. I dropped the hatch, lowered the ladder, climbed over the railing and scampered up into the bowels of the airplane.

This was shortly after flight operations had secured and aircraft were still being re-spotted and tied down for the night.

As I was busily pursuing completion of my task, half-way upside down, my body snaked through ribs and frame supports in a space that was decidedly not engineered with human occupation in mind, I suddenly heard some panicked shouting from outside the airplane. I stopped what I was doing and was instantly on alert. I then felt a shudder through the airframe that I was precariously occupying and distinctly heard a voice from outside yell “GET OUT OF THERE, SHE’S GOING OVER THE SIDE!”

Needless to say, my heart immediately leapt…nay…JACKHAMMERED into my throat. With visions of a cold aluminum coffin filling with water, my heart pounding in my chest and the metallic taste of pure adrenaline in my mouth, I squirmed, wriggled and writhed toward the hatch entrance. I got within striking distance in a split second and threw myself headlong through the hatch. I hit the top bar of the catwalk rail on the way past and landed on the metal catwalk with an authoritative “thump!”. Disregarding the sudden pain in my shoulder caused by bouncing off the catwalk rail, I quickly rolled to my back so I could see what was going on…only to witness an F-14 going over the side right next to the A-3 from which I had just been disgorged. It seems that the ship had taken an unfortunate roll as the F-14 was being parked and the tow bar had chosen that exact moment to let go. The shudder I had felt was the transmitted vibration of approximately 60,000 pounds of aircraft hitting, shrugging off and climbing over the deckedge scupper on its way to a refreshing swim. The shouted admonition to “get out” was directed at the brake rider who was, at the time, frantically mashing the toe brakes for all he was worth trying to tame the balking beast.

Luckily, no one was seriously hurt and the only real damage was the total loss of a 35 million dollar aircraft. Oh well. Congress has plenty of money right?

The funny thing is. As I laid in a pile on the catwalk deck waiting on my heart rate to back down from warp speed and return to impulse drive I realized that, in my haste to disentangle myself from the aircraft, I had neglected to jettison unnecessary equipment. I still had the safety wire pliers I had been using in my hand.