I’m home from the “Prosecute Bloomberg” rally. It was an interesting experience. In some ways the rally was very successful, in other ways not so much. Here is the VDCL alert sent out after the rally. Phillip arranged to have a professional document the press conference and rally. Links at the end of this post.

I left the house at about 8:15, stopped for gas and a coffee roll at WaWa and then was on my way. There was the normal backup at the Hampton Roads Bridge tunnel (It’s dark in there…must…slow…down) but traffic was smooth sailing from there on out. I intentionally left early to allow for traffic. Since traffic was not an issue, I ended up getting there way early. Oh well, better than late.

I got to the parking garage for the Springfield-Franconia Metro station at about 11:45. What a scam. You have to buy a “Smartrip” pass with which to pay for parking. The card itself costs $5, then the minimum value you can put on the card is $5…of course the all-day parking fee is only $3.75 so It cost me $10 to park and now I’m the proud owner of a Smartrip card with $1.25 left on it. They do have some metered spaces but nothing is clearly marked (unless you consider cutesy terms like “Kiss and Ride” to be clearly marked…do I get a kiss if I ride there, and from whom? And what the heck does that have to do with parking spaces???) and I couldn’t find any open anyway.

In fact, to find a spot in the all-day section, I ended up on the roof and the only open spot I could find was next to a car that was parked over the dividing line, effectively occupying two spaces. I backed into the spot (to leave enough room on the driver’s side so I would be able to get out) and put my passenger side about 2.5 millimeters from the passenger side of the offending vehicle. Unfortunately, the car was still there when I left so the driver didn’t get an opportunity to marvel over my parking skills and/or scrape his paint against my 14 year old beater of an Explorer.

Anyway, after parking, buying my “Smartrip” card needed to escape the parking prison and my “farecard” for the Metro, the ride downtown was uneventful. Of course, Murphy’s law was in full effect and, shortly after exiting the Metro car at McPherson Square, I realized I had left my digital camera in the car. I had time to go back and get it but I really didn’t relish spending another hour on a Metro train. I quickly spied a CVS pharmacy on the corner and bought one of those disposable cameras. The Next Question was…what to do with myself for the next hour or so while waiting for the festivities to commence. First, I wandered around a bit to get my bearings. The Metro exit from the McPherson Square station is strategically located almost exactly between the two places of interest for this visit. The Capital Hilton, site of the protest, is on K and 16th Street, the Crowne Plaza, the staging area, is on K and 14th Street, the Metro station exit is on I and 15th Street. I wandered up to K and first went left to 16th and found the Capital Hilton, no problem, then I reversed course and, stopping for a short 20 minute break for a cup of Cappuccino and head call at Starbucks, walked back down to 14th and, Viola, the Crowne Plaza was right where it was supposed to be. That was easy. Murphy must have taken a break at that point because just as I was thinking about finding a place to eat, I noticed a Subway sandwich shop right across the street from the Crowne Plaza. Perfect.

I took my time eating and, at about 1:30, walked across the street to the Crowne Plaza. It was pretty easy to spot my group, they were the ones sporting the orange “Guns Save Lives” buttons and looking like they were waiting for something important. 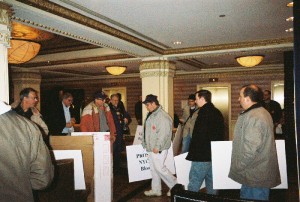 While we were waiting, we discovered that Bloomberg had moved the press conference and reception to different places. They were no longer being held at the Capital Hilton. To everyone’s credit, I didn’t even hear a suggestion of canceling. We talked about moving the protest to wherever they were meeting but eventually it was decided to stick with the plan. Last minute changes are not conducive to an organized protest (or an organized anything else for that matter).

My thoughts on Bloomberg’s change of venue? If you recall, last week several of the blogs (this one included) that mentioned the upcoming protest were visited by someone from NYC.gov. My guess is that they didn’t want us stealing their thunder. Basically, they are cowards. They know that their position is untenable and unpopular so they avoided us to prevent themselves from having to answer direct questions. Also, the less media attention that we get, the easier it is for them to pretend like they are just exercising the “will of the people”. 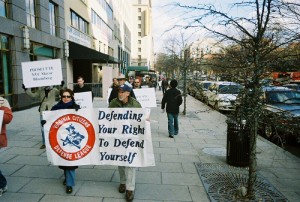 In any case, many of the Mayors that were there for the “summit” were staying at the Capital Hilton so we stuck with the plan.

We divvied up the signs prepared for the event and marched purposefully the two blocks to the Capital Hilton.

There were about 30 of us so we had a good showing as far as I am concerned. Most of us had never been involved in a protest before. We didn’t chant or march, per se. We basically stationed ourselves on the sidewalks at the main entrance to the hotel, the side entrance on K street and the median next to K street. We did wander up and down the sidewalk with our signs as the spirit led us but we didn’t “picket” in the traditional sense. We weren’t protesting the Hotel, after all and we definitely were not trying to obstruct innocent people from going about their business…just trying to raise awareness. 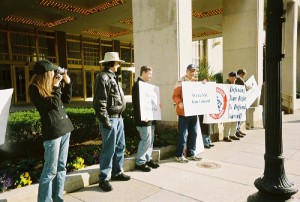 During the course of our protest, several people stopped and asked us what was going on. This gave us the opportunity to spread the word. Most people that stopped were supportive. We got lots of thumbs ups and plenty of aural responses to our “Honk if you support gun owners” signs. I heard that a couple of anti-gunners decided to comment but chose to comment to the only female in the area, eschewing a debate with any of the male gun rights supporters in the immediate area…typical.

I did have one young gentleman stop and ask pointed questions. I got the distinct feeling that he was an anti-gunner and was waiting for a chink in my answers to give him an opportunity to
assail my logic. After a few minutes of questioning, the encounter columnated with him asking why Bloomberg should be prosecuted rather than the dealers who sold the guns. My explanation that the dealers could only be held liable under the law if they “knew or should have known” that a straw purchase was taking place, resulted in his stomping off muttering “sounds like a dangerous law to me”. We weren’t sure exactly what he meant by that but he didn’t stick around to explain or debate. 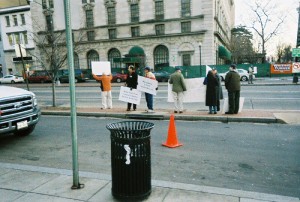 Another gentleman asked me, in a good-natured way, if we really thought we’d be able to get the Attorney General of New York to file charges against Bloomberg. I responded that we didn’t need to if the BATFE does their job and investigates…any charges would be federal. He conceeded the point with a laugh and moved on.

I was at the front entrance of the Hotel throughout most of the protest, but I heard that several Mayors went in and out through the side entrance while we were there. I wish I’d had a chance to let Mayor Fraim know that a Norfolk resident was there…not that it would change his anti-gun ways, just to let him know that we are watching.

I was told that a couple of the Mayors showed some interest in our protest and asked questions of the protesters near the side door. I can only hope that they will see the light and abandon Mayor Bloomberg’s exercise in scapegoating like Idaho Falls mayor Jared Fuhriman did a couple of weeks ago. 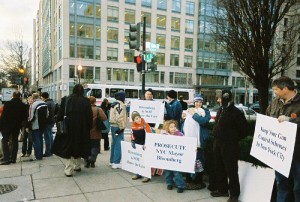 All in all, I think it was a very good day of protesting even if we didn’t get the media exposure we had hoped for and weren’t able to confront the entire delegation of Mayors as they attended the “summit”.

Our group ran the gamut from a Babe in Arms to some stately elderly gentlemen; from construction workers to lawyers; from bright, smiling young couples to old curmudgeons like me.

One particularly interesting conversation I had with a participant who was a resident of Northern Virginia: He volunteered that he was an escapee from New York (it was hardly necessary as his accent revealed his heritage readily) and had fled, at least partially, to escape New York’s oppressive gun laws. The sign he carried “We don’t want NYC Gun Control in Virginia” was especially apropos to his story. 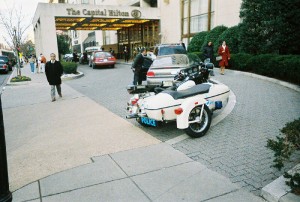 We were visited by some of DC’s finest, including the one that pulled up on this interesting vehicle…I’ve never seen a Police Motor Unit with a sidecar before…but after they determined that we weren’t a bunch of loons and weren’t obstructing the street or access to the Hotel, they were actually quite pleasant and talked to a few protesters for a few minutes. They were pretty noncommittal about our cause but were decidedly friendly and non-threatening.

The group started talking about finding a place for dinner at about 5:00. I took the opportunity to shake everyone’s hand and say my goodbyes as I felt I needed to get on the road to get home at a decent hour. After battling the (in)famous DC traffic I made it home at around 9:00…just in time to retire with my One True Love.

I’m glad I made the trip. I got my first experience protesting, met some interesting, friendly and all-around good people and hopefully helped to spread the word about our cause.

Videos from the VCDL

Video of Rally and interview with VCDL President