I mentioned in my previous post and range report that the trigger on my new old Mosin-Nagant M44 is way too light. So light that I could get it to release by gently bouncing the butt of the rifle on the floor.

I ordered some new parts from Tennessee Gun Parts but, in the meantime, I decided to see if I could do something about the problem. 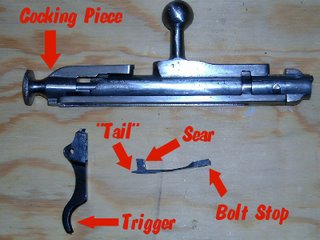 The Mosin Trigger System is the essence of simplicity. It basically consists of three pieces, the Trigger, the Bolt stop and the Cocking Piece.

The Cocking Piece is at the rear of the bolt body.

The firing pin passes through the bolt body and is screwed into the Cocking Piece knob.

The end of the Bolt Stop with the Sear passes through a hole in the top of the trigger, the Sear then hooks a protrusion on the Cocking Piece preventing it from moving forward with the bolt body. 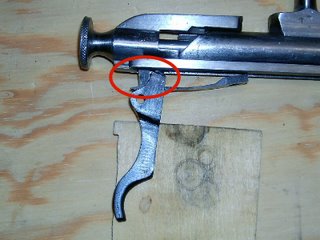 When assembled on the receiver, it looks kind of like this.

The Firing Pin spring places the Firing Pin and, thereby, the Cocking Piece, under spring tension. The rifle is Cocked and Locked. 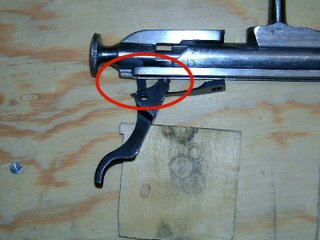 When the trigger is pulled, it pivots on a pin and acts as a lever, the trigger pulls the Bolt Stop down until the Sear disengages from the Cocking Piece.

The Cocking Piece moves forward due to the Firing Pin Spring pressure and propels the firing pin into the cartridge primer and the rifle goes “Bang.” 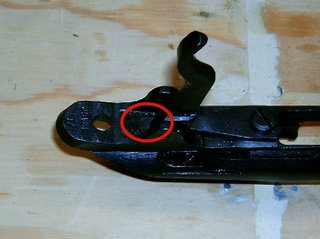 When the Bolt Stop and Trigger are installed in the Receiver, the small “tail” at the end of the Bolt Stop rests against the receiver. The Bolt Stop screw places spring tension on the Bolt Stop which holds the Sear in place until the trigger is pulled. 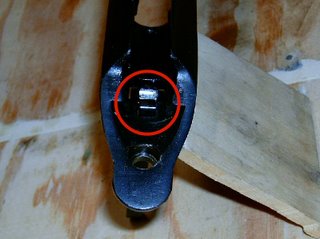 What I determined is that the Sear was either worn, or filed down to the point where it no longer protruded enough past the edge of the receiver to fully engage the Cocking Piece. The end result was that a sharp blow (sometimes, a not-so-sharp blow) to any part of the weapon could cause it to fire without the trigger being pulled. 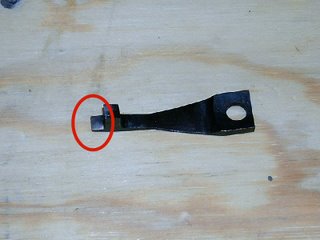 The fix was simple: I just used a flat jewelers file to remove some metal from the small “tail” on the Bolt Stop that rests against the receiver when installed. This allowed the Sear to protrude more and engage better with the Cocking Piece.

I went slowly and only removed enough material to make the rifle safe. The trigger pull is still very light for a military rifle (I’d guess about 4 pounds…I don’t have a trigger pull gage) but it will no longer fire when jarred.

I’m still glad that I ordered the spare parts (I ordered a firing pin, Cocking Piece and Bolt Stop) because I’d rather firm up the pull even more but don’t want to make the “tail” on the Bolt Stop too thin. Besides, it never hurts to have some spare parts just in case. Of course, this rifle is so simple, there are very few spare parts needed and so inexpensive that it may be cheaper just to buy a spare rifle.

Even so, I like having spare parts for my rifles. I guess I’m just a belt and suspenders kind of guy and you never know when the supply might dry up. I’d like to pass my firearms on to my kids and grandkids so I want them to be able to keep them working for a good long time.