One of the reasons I am proud to be a member of the VCDL is because of their uncompromising and tireless support for the Second Amendment at both the State and Local levels. The VCDL leadership and members never hesitate to send letters, emails, make phone calls and even travel the state to speak at City Council meetings to address issues at the local level (in fact, the President and others are attending a Manassas City Council meeting tonight regarding the incident I blogged about a couple of posts ago…boy do I wish I could have been there…just couldn’t get away).

I participate in these events as often as my schedule allows. In the meantime, I always try to stay on the alert for things locally that need to be addressed.

One of the ongoing challenges since we got State Pre-emption passed a couple of years ago is combating the seemingly irrepressible urge of local officials to ignore state law and establish gun bans on public property just because they think it is “the right thing to do”.

In all fairness, most of the time when this happens, it is because the local official simply didn’t know the law. They are generally incredulous, and sometimes downright outraged, that they don’t have the authority to ban guns from “their” building or property. They don’t like to be reminded that “their” building or property actually belongs to me…as well as every other taxpayer in the state of Virginia. They especially don’t like being reminded that THEY are OUR employees, not the other way around.

Anyway, the latest incident involved the branch of the Norfolk Public Library nearest my home. I was there checking out some books when I noticed a “Rules of Conduct” sign that stated “NO dangerous weapons (guns, knives etc)”. I decided that this warranted some action.

I emailed the manager of the Branch and CC’d the General Manager of the NPL system as well as the City’s Commonwealth Attorney and the President and Vice President of the VCDL:

I just returned from the Little Creek Branch of the Norfolk Public Library. While there, I noticed a sign outlining the rules of conduct for the branch. One of the stipulations on this sign is “No Dangerous Weapons (Guns, Knives, etc.)” or something to that effect.

This issue has been addressed more than once but seems to reappear at various intervals.

As has been pointed out in the past, the rule as spelled out on the sign is unenforceable and may be illegal. As you probably know, the Code of Virginia (Section 18.2-308) allows for the licensing of qualified persons to carry concealed handguns in the Commonwealth. Furthermore, openly carrying handguns is not prohibited by law (other than by prohibited persons and minors) and no license is required.

The only locations where the carry of firearms is prohibited by the Code of Virginia are:

Furthermore the Code of Virginia, Section 15.2-915 states in part “No locality shall adopt or enforce any ordinance, resolution or motion, as permitted by Section 15.2-1425, and no agent of such locality shall take any administrative action, governing the purchase, possession, transfer, ownership, carrying, storage or transporting of firearms, ammunition, or components or combination thereof other than those expressly authorized by statute…” [emphasis added].

As a citizen of the State of Virginia and a resident of Norfolk, I request that the Rules of Conduct signs in the Little Creek Branch, and any similar signs in other Branches, of the Norfolk Public Library be removed and/or the text modified to eliminate the language that is in contradiction to the Code of Virginia.

Please let me know how you intend to address this problem and when I can expect the offending signs to be removed or corrected.

I am happy to report “mission accomplished”.

I got a very cordial letter from the Branch Manager, followed a couple of days later by a phone call from the General Manager. Both of them were insistent that this was nothing more than an oversight…someone had posted an old sign…and that they would personally verify that it was taken care of. 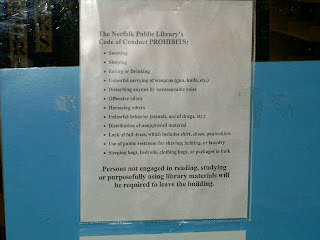 I finally had a chance to go by the library today and take a look. The new language is much less offensive than the old one. This time I made sure I had my camera and took a picture for posterity.

Granted, it would be preferable if they left the language about weapons off completely. What criminal prone to carrying illegal weapons is going to obey a posted “rules of conduct” sign anyway? And there is the possibility that some overzealous patron may misunderstand, not know that firearms can be lawfully carried, and call 911 on an ususpecting law abiding citizen. But, even so, at least the sign isn’t blatantly illegal any more.

This may seem to be a very minor victory to most people, but I learned a long time ago, if you let the little things slide, eventually they become bigger and bigger and bigger until the infractions are an unstoppable avalanche. Better to nip it in the bud when it is a relatively minor issue and easily corrected than after it turns into a major sticking point.

One last observation: I was very impressed with the reaction of both the Branch and General Managers on this issue. They both seemed genuinely concerned about my complaint and quickly took personal action to correct the mistake. Kudos to both of them, they are a credit to public service.