In our last episode, Evolution of a Homeland Defense Weapon, we removed some extraneous appendages from our trusty SKS in preparation for creating the perfect (for me) homeland defense rifle. 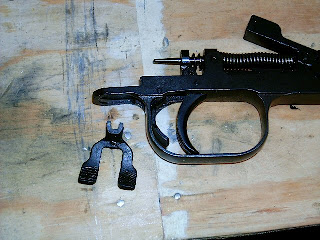 This time, we are going to perform the requisite southpaw surgery and add an ambidextrous safety obtained from Paul’s Guns, aka The SKS Man.

I initially thought that it would be a simple operation…remove the old safety lever, install the new one. Au Contraire Mon Ami…That would just be too easy now wouldn’t it (and not nearly as much fun). 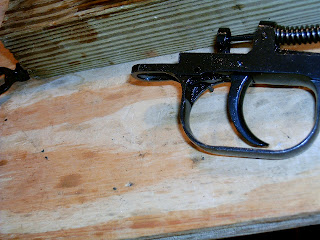 After drifting out the pin and removing the old safety, I realized that the trigger guard has a small corner of metal on the port side that doesn’t exist on the starboard. In order for the double-sided ambidextrous safety to fit, we would obviously need to perform an extratriggerguardmetalectomy.

I decided that the best bet to do this correctly would be to completely disassemble the trigger group.

I didn’t take a bunch of pix of disassembly because that’s the easy part. I did take step by step pix of reassembly which you will see below. 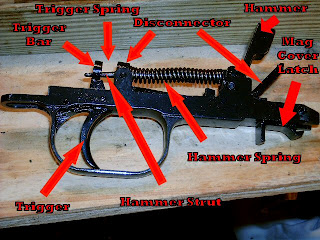 (Note: the trigger spring had already been removed before taking this picture so the arrow is indicating where it SHOULD be…use your imagination) 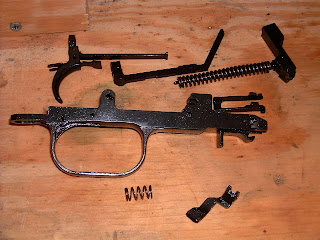 Incidentally, this was NOT the best order for disassembling the trigger group. It was the order I used because…well, I just didn’t know any better at the time. A much more logical order for removal would be: Hammer, hammer strut and hammer spring as a unit; disconnector and trigger spring; rebound disconnector; trigger bar, trigger and safety spring as a unit; safety catch; latch stop pin; magazine cover latch; sear/latch spring; sear. 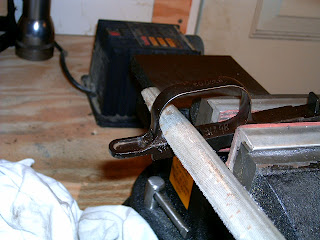 After disassembly, I put the trigger housing in my padded vise and started filing, grinding and shaving metal. 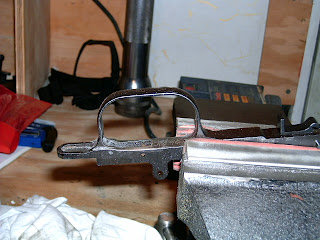 I started out with a large file to knock the big chunks off, then I went to the rotary tool with a grinding stone to get it down to the fine work. I finished off with jewelers files and then emory cloth sandpaper of increasingly fine grit to get to the final product.

Three coats of cold blue later and I was satisfied that I’d gotten it as clean and uniform as I was going to. 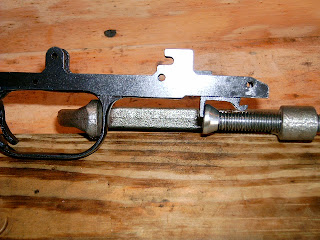 I started to just put it back together, but I decided, since I had it pretty much apart already, I’d try to smooth the trigger up a little. I was pretty sure that most of the “gravely” feeling in the trigger was a result of a worn sear and the portion of the hammer that contacts same. I decided that I didn’t want to just drive the latch stop pin out and risk firing the latch and latch/sear spring across my workspace. I used a “C” clamp to hold the magazine cover latch away from the latch stop pin, then drove the pin out and released the clamp gently. That worked out very well.

After removing the latch stop pin, latch and spring, the sear slides off its rails and out the front of the trigger housing. The contact points on the sear, hammer and rebound disconnector are pretty easy to spot. I didn’t want to take too much off for fear of making the rifle unsafe so I gently polished the contact points with a stone. I went very slowly and made sure to maintain the angles of the contact points. Now that all is said and done, the trigger is noticeably smoother but still not as clean as I’d like. If and when I ever take the trigger apart again, I’ll work on it some more. 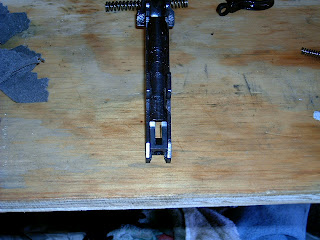 Now for the fun part: Putting it all back together.

First, I put the sear back in on its rails. 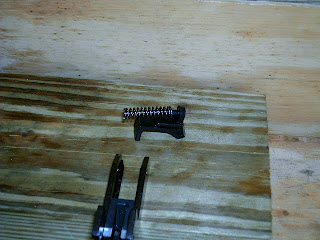 Then the sear/latch spring and latch. 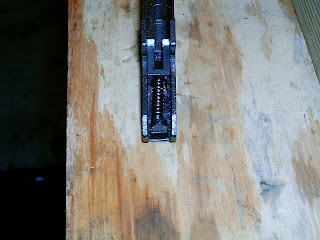 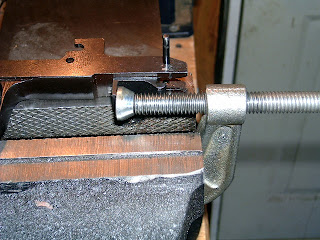 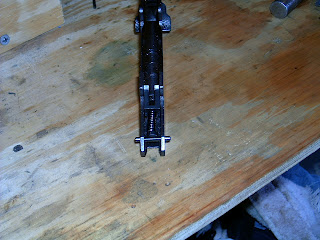 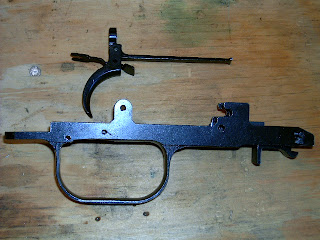 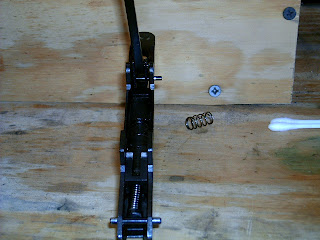 Basically, the method that ultimately worked for me: Get the pin started into the trigger housing so that it just barely protrudes through the inside of the hole. Put the trigger/trigger bar/safety spring assembly into the housing, move the trigger bar around until the mount hole catches on the small bit of pin that is protruding…this tells you that it is lined up with the pin, drive the pin in just enough to keep the trigger bar from being able to fall back out. It will probably be cocked at this point and you may have to put some sideways pressure on the trigger to get it to straighten out. I then used a small punch to push the safety spring into the right place so that the “v” in it was passing under the pin, then used the punch to hold the safety spring in place and put pressure on the trigger bar to keep it straight while driving the pin the rest of the way in.

If it sounds complicated and difficult…you have no idea until you do it yourself. Not fun…but doable. 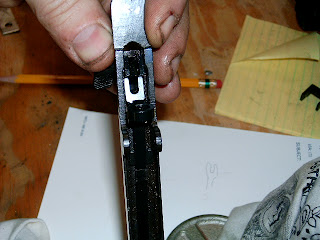 The next step took a little playing to find the best method as well. After the safety spring is installed, it is very much in the way of installing the safety (makes sense since the whole point in the spring is to put pressure on the safety).

What worked for me involved the punch again.

I got the safety positioned in approximately the right place but couldn’t overcome the spring pressure enough to get the holes lined up using just my fingers. 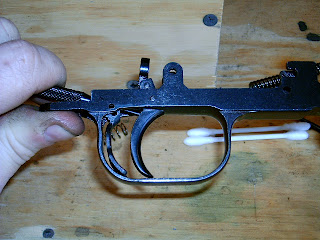 To alleviate this problem I inserted the punch into the trigger housing and used it as a lever to pry the safety spring up. This gave me just enough play to get the holes lined up and install the safety catch pin.

This wasn’t much easier than installing the trigger bar/trigger/safety spring and would have been much easier with the third hand that I needed in the previous step as well.

If anyone knows of an easier method for performing these two tasks PLEASE let us all know. You’ll be making the world a better place. 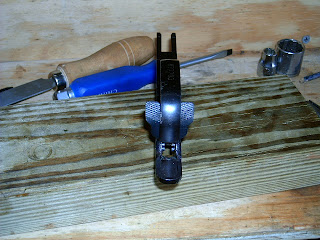 There you have it. Ambidextrous safety…one each. 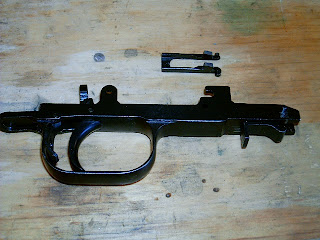 Next to go in is the rebound disconnector. 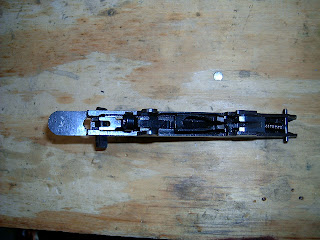 Basically, just squeeze it together to fit it down into the trigger housing. 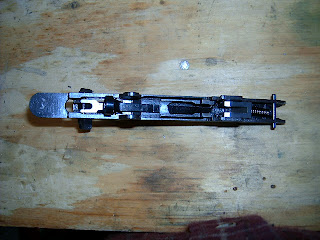 Line it up and pop the trunions into the holes in the housing. Simple. 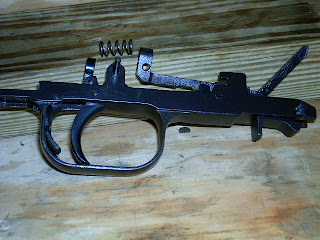 The disconnector goes down into the slot formed by the two ears of the rebound disconnector and the slot in the sear. It is held in by the pin that goes through the uppermost “ears” on the trigger housing. 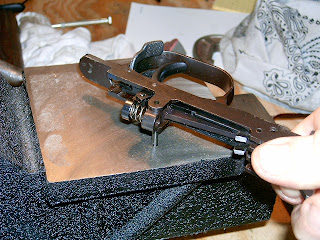 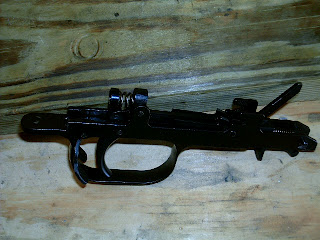 This was actually much easier than I thought it was going to be. The designer conveniently left slots in the trigger housing into which the hammer trunnions slide. That way there is no need to drive a pin in while trying to compress the very heavy hammer spring.

The method I used worked very well. placed a block of wood flat against my considerable gut. I placed the rear of the trigger assembly against the wood. I put the hammer spring on the hammer strut, inserted the pointy end of the hammer strut through the holes in the disconnector and hammer bar, pulled the hammer toward my gut to compress the spring and slid the hammer down until the trunnions slid into the slots in the trigger housing. This method was very effective. 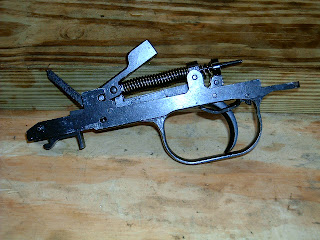 For our next installment: modifying the bolt to enable installation/removal of removable mags with the bolt closed.

3 thoughts on “Evolution of a Homeland Defense Weapon 2”