This should be the final episode of Evolution of a Homeland Defense Weapon for a while. There may be more mods to come in the future, but this is going to be it at least for a little while.

To recap everything we’ve done so far:

In the previous incarnation of my blog, we removed the stock sights and installed a Williams firesight front sight and a Tech Sights TS-200 rear aperture sight.

In Pimp My Rifle, we added a Choate drill and tap scope mount. Lo-profile scope rings and a Leapers 6×32 mil-dot scope. We also removed the front night sight.

In SKS Muzzle Brake, we removed the grenade launcher and grenade sight and installed a Richard Miller 6 port screw on muzzle brake.

In SKS Legal Issues, we explored federal law and the legal ramifications of some of these mods.

In Evolution of a Homeland Defense Weapon, we removed the bayonet and lug and removed the extraneous grenade launcher baubles from the front of the sight base.

In Evolution of a Homeland Defense Weapon 2, we disassembled the trigger group, tuned the trigger a little bit and added an ambidextrous safety.

And finally, in Evolution of a Homeland Defense Weapon 3, we modified the SKS bolt to accept a removable magazine with the bolt closed.

While waiting for the arrival of the Tapco T-6 stock that I had ordered, I completed many of the mods listed above. There was one more task that needed to be accomplished before I could fully install the new stock, however. I needed to remove the upper handguard from the gas tube. 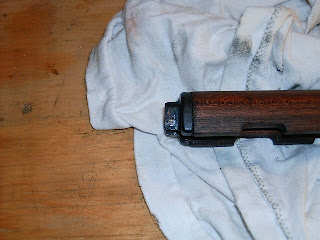 First I doused the upper handguard retainer pin with penetrating oil and let it sit for 48 hours, repeating the application of oil occasionally. Then I tried driving the pin out with a pin punch and hammer.

And tried some more.

No joy. That thing wouldn’t budge. 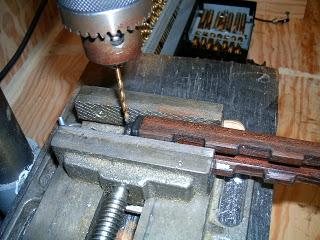 Next, I decided that I wasn’t going to get the pin out without damaging it. I went to Numrich Gun Parts and ordered a new pin (which I still have not received to date, by the way…supposedly, it is in the mail). Then I used my handy-dandy drill press to drill about 1/8 in off of each end of the pin to get rid of any peened areas or lips that might be causing the problem.

At this point, I must admit to some very ungunsmithlike behavior: I got pissed. I lost all patience and just decided to drill the damn thing out. In my haste to get it out, I didn’t get it aligned in the drill press properly and basically ruined the gas tube by drilling the hole crooked.

I ended up with a useless gas tube with an elongated hole and pieces of that $%@ @^&*#@ pin still in it.

But I did get the upper handguard off.

OK. Plan “B”. I needed something from David’s Collectibles already and they also sell Tapco’s Yugo Gas tube with the composite upper handguard already installed so I ordered them.

The interesting thing is that I ordered the gas tube/upper handguard assembly from David’s a full two days after ordering the stock from Tapco, but I got them both on the same day. Good job David’s Collectibles.

The moral to this story is, if you get pissed, stop working. Take a breather. Come back to it later or your anger and impatience may just hit you in the wallet. 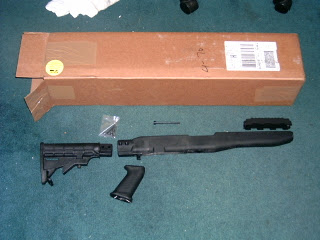 Back on track now, T-6 stock in hand and Gas Tube assembly still on the way. let’s see what this is going to take.

I was really expecting to have to fit the stock to some degree. I wasn’t expecting a “drop in” fit.

I was pleasantly surprised.

I did have to pull the walls of the stock apart a little because the reciever fits in a little tightly, but once I figured that out, the barrelled receiver popped right into the main part of the stock. No problems.

I knew already that I was going to have to do some fitting to get the Choate scope mount to fit but before it was installed, the barrelled receiver went right in. 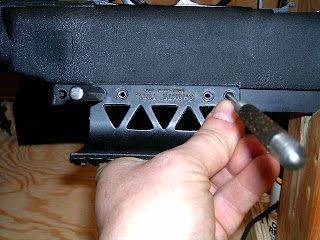 I held the scope mount in the right area with some long pin punches through the mounting holes and marked the stock to identify the area that needed to be relieved.

I clamped the stock in my padded vise and started out with the rotary tool. It became rapidly apparent that the rotary tool wasn’t going to work. Basically, the high speed tool was melting the composite material more than grinding it and was just making a mess. 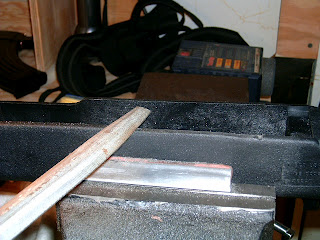 I quickly went to the manual file method. 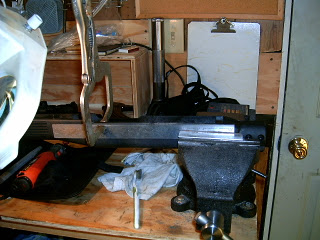 After roughing the recess in, I wanted to make sure I got the finished product as straight as possible. I clamped a metal rule to the stock along my line and then finished the task off with jewelers files.

I then sanded any remaining roughness off with fine emery cloth and cleaned with a cloth and warm water.

There were also some casting marks and artifacts that I filed or sanded off but, for the most part, the stock was fairly clean out of the box. 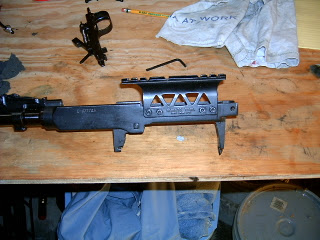 Next, I reinstalled the Choate scope mount onto the receiver. 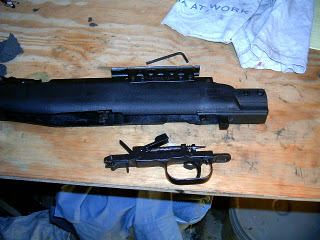 Put the barrelled receiver back into the stock, 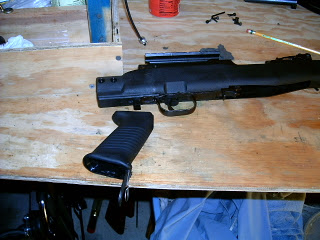 and secured it by installing the trigger group. 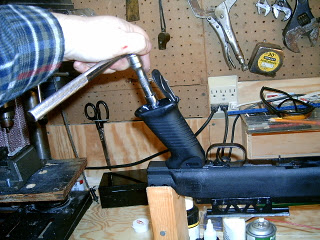 The next part to go on is the “Saw” style pistol grip. The pistol grip is hollow and has a “door” in the butt end. The mount bolt goes through the inside of the grip into the bottom of the stock.

The only disadvantage to this setup is that the pistol grip will have to be taken off to remove the trigger group when disassembling the rifle.

After tightening, the grip is very secure and stable. I just hope that it doesn’t loosen up with repeated removal. I’ll just have to make sure not to disassemble the rifle any more often than necessary. 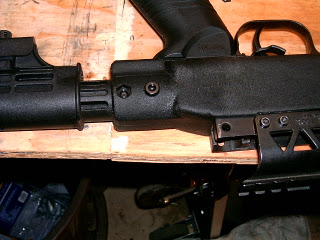 Next was installing the adjustable buttstock.

It was pretty straightforward. It did fit tightly and required a little tapping to get it completely seated.

Also, be sure to put the nuts on the side with the “nut shaped” holes and tap the nuts all the way to the bottom of the holes or the screws will be too short to reach them. 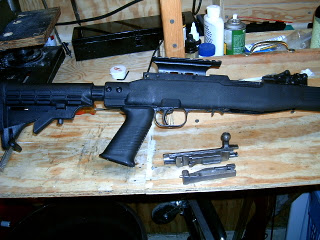 Next, bolt and bolt carrier. 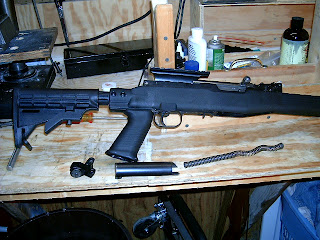 Then the recoil spring/guide and the receiver cover. 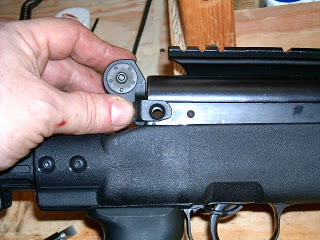 I needed to relieve some material from the rear of the stock.

Time to take it all apart again. 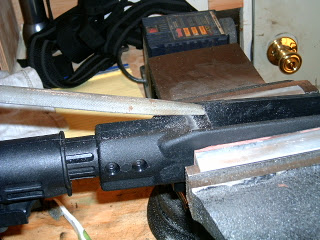 I used my standard procedure, start out with a large file, work my way down to jewelers files, then emory cloth. If it works, stick with it. 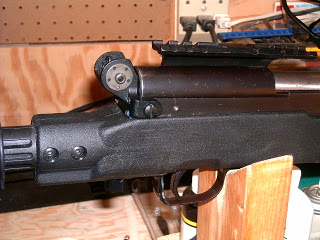 Put it all back together and VIOLA!. Tech Sight installed successfully. 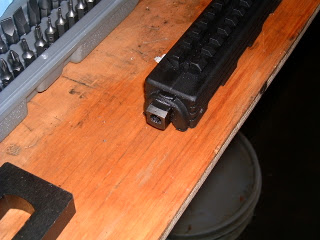 While I was working on the rest of the stock, the Fedex guy showed up and delivered the Gas tube assembly from David’s. Yea!

The tube is meant to be fitted to the particular rifle. The instructions said to file down the top of the receiver side of the tube “maintaining this angle” with a vague drawing. OK. Here Goes. 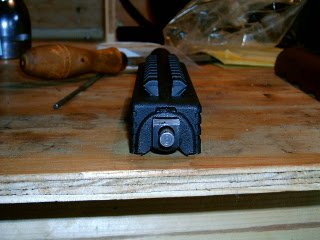 I didn’t want to file down so far that I cut into the gas piston hole.

I looked it over to see if there may be a problem. 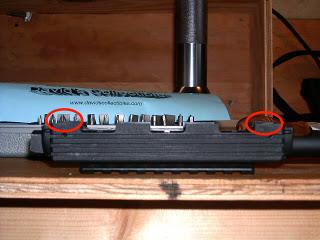 There were four little nubs on the bottom of the handguard that made it stand up just slightly higher than the stock wooden handguard.

They are hard to see in the picture so I circled them.

I wonder if I can file down the rear ones enough to lower the gas tube to the point where it will fit without having to file any more metal off?

No guts no glory. 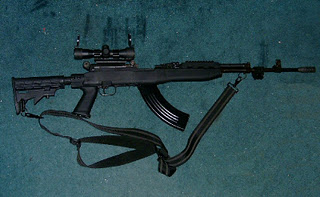 The only things that I have left to do are buy a bunch of spare mags and ammo, add a tactical light and possibly vertical foregrip and I’m thinking about cutting the barrel off about an an inch and a half forward of the front sight to shorten her up a bit. I may re-thread and reinstall the muzzle brake just because I hate for a perfectly good $35 part to go to waste…but I may exchew that for weight and length purposes. I haven’t decided yet.

I need to do a little research and see what kind of effect losing three inches or so off the barrel will have on muzzle velocity.

2 thoughts on “Evolution of a Homeland Defense Weapon 4”