As most of you probably know, I’ve been working on transforming a beater SKS into a viable Homeland Defense Weapon (otherwise known as an Evil Black Rifle, or EBR).

I chose this route for a couple of reasons: First, I bought an SKS at a gun show for $109…a price I couldn’t pass up for a pretty good looking rifle with a decent bore. However, after getting it cleaned up and to the range for the first time, I realized that I had nothing more than a really fancy bolt action rifle. The action wouldn’t cycle because of problems with the gas system. After futzing around and engaging in a very steep learning curve, I finally got her operating correctly. The thing is, I had the “bug”. I found that I really enjoyed tinkering and decided to try my hand at some more interesting things than just getting her to work.

Now that I had changed some major components, this particular rifle didn’t have any particular collector value and it wasn’t much of a collector to begin with. So I figured it was as good a candidate as any for “bubba-ing” up (bubbaizing? bubbination? Anyway…)

For the record. If you want an economy high cap, semi-auto EBR…this is not the most economical way. By the time all is said and done, I could easily have purchased a WASR or other AK clone for the money I’ve invested…not to mention the hourly rate for my time. I’m sure I have also evoked the ire of many traditionalist rifle collectors who will undoubtedly exclaim: “What’d you wanna go and mess up a perfectly good C&R rifle like that???”

Well, I did it because I wanted to. I did it because I’m learning more and more about gunsmithing, and I did it because I enjoy tinkering. The one thing that I decidedly DIDN’T do it for is to save money so, as I said, if you are looking for a low budget EBR…this isn’t the way to do it. Save your pennies and buy an AK clone. With that said: on with the show:

The first thing I did was buy the Williams Firesight system. I was not happy with the rear sight but I do like the front fiber optic sight. I then purchased and installed the Tech Sight TS-200 rear sight which worked out much better. Unfortunately, I lost the original iteration of this blog and all backups (due to my own stupidity) and can’t refer back to those posts.

I did mention more detail about the Williams and Tech Sights in THIS POST where I describe the next phase of the transformation: installing a barrel clamp tri-rail mount, a Choate Machine and Tool drill and tap scope mount and leapers 6×32 scope. I also removed the front night sight during that phase.

The NEXT STEP was removing the grenade launcher and grenade sight and installing a Richard Miller threaded muzzle brake.

I had looked into the legal ramifications of these mods before beginning, but, in response to a question on a forum that I fequent, I LOOKED A BIT DEEPER and realized that there were some ramifications that I had not considered fully. I decided that I needed to completely finish my conversion in order to stay within the faint squiggly lines of the law.

With that in mind I ordered the parts I needed for the remainder of my escapade.

While waiting for my orders to arrive I decided to start on some of the modifying that I didn’t need the parts for. 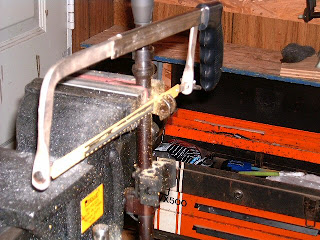 First, I decided that the bayonet was not really very practical for what I had in mind…also it can bring into question the legality of the mods. With those two factors in mind, I decided to get rid of it.

It was a tough decision to make and I went back and forth about it for a few days before I made up my mind. I’m still a little torn about it, but once I make a decision, I rarely look back.

The bayonet itself is easy to remove, you just unscrew the retaining screw and the bayonet comes off the lug; however, I didn’t want that funky lug hanging off the bottom of the sight…and that required a bit more effort. 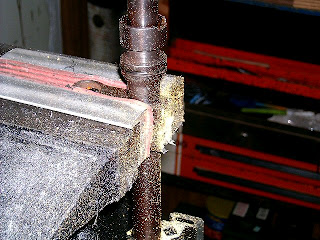 I started out using a hacksaw to cut the major portion off leaving a little metal “slop”. I’d rather take off too little and just have to file more than take off too much and butcher it.

Next, I used my dremel tool and files to start grinding off the extra metal. 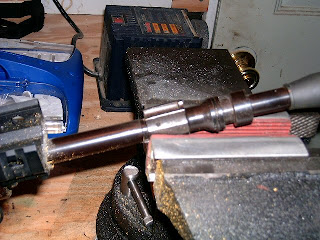 After working on it for awhile, I realized I really didn’t like all the extra do-dads on the front of the sight that were related to the grenade launcher. What the heck. While I’m in the sawing and filing mode…I don’t like them…Off they come!

The only problem is, to cut the grenade launcher section off, the sight would have to come off the barrel. This looked to be interesting.

I started out looking around on the internet for ideas (thank God for Algore). Removing the front sight didn’t seem like a common occurrence but it had been accomplished by a few enterprising SKS bubbas. The most common method was using a shop press…which I don’t have. Some people just talked about tapping it off with a mallet and punch or wooden dowel. I wasn’t too sure about that method so I put my thinking cap on. I don’t have a shop press, but I do have some automotive tools designed for similar tasks. How about a Gear Puller? 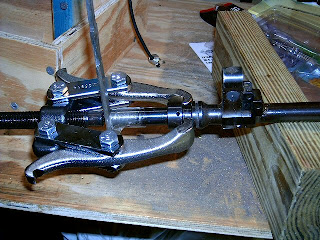 First, I punched out the pins locking the sight in place. Then I took the muzzle brake off and taped the barrel threads to protect them. I scribed a mark on the barrel and rear of the sight for alignment when I put it back on.

I used a piece of flat steel (actually, an old wood chisel) to protect the muzzle from the center screw of the puller. 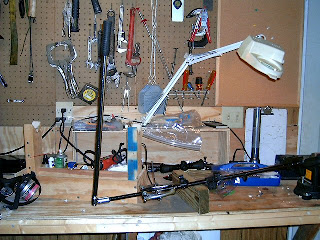 Well, I guess that’s what God made breaker bars for huh?

The miracle of leverage. 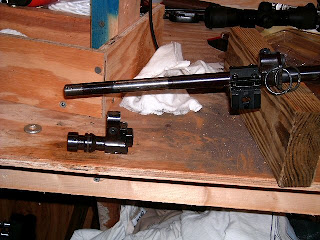 Pop. Off it came. 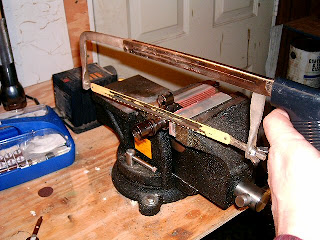 Time to break out the hacksaw again. 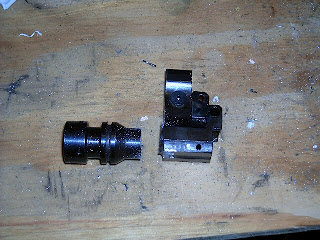 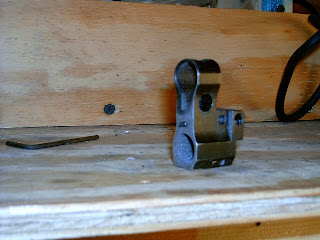 After cleaning it up (and finally getting that stupid grenade launcher sight mount off) I thought it looked pretty good and much more neat.

I thought about grinding off the blocky back portions with the (now unused) mount holes but I’d had about enough cutting and grinding and I was a bit afraid that I’d mess the sight up beyond repair trying to clean up the butchery that removing that section would require. 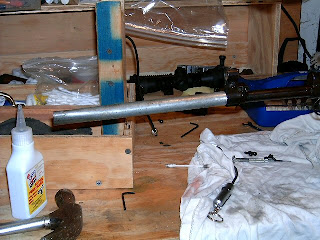 I put a couple of coats of cold blue on the barrel and sight before reassembling, but I knew putting it back together would mar the blueing so I didn’t worry about getting it perfect.

I used an old piece of pipe I had laying around that happened to be the exact right size (sometimes being a packrat can be a blessing) to drive the sight back onto the barrel.

Lined up my witness marks, checked the hole alignment and reinstalled the pin. 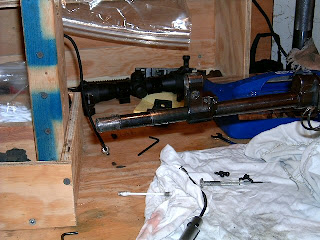 I ended up putting three more coats of cold blue on after getting the sight back together but the finished product looks pretty good and I like the cleaner lines much better than with all those extraneous baubles hanging off of it.

Coming up next time: