I have to apologize for not getting this up yesterday, however I claim illness. I actually started coming down with a bad head cold on Friday. By Saturday morning at 0330 when I arose to head to DC, I was downright miserable. Yesterday I took the day to rest and try to recover. I’m feeling a little better but now it’s trying to move into my chest. I took today off to rest some more and try to stave off Pneumonia but I don’t want to wait any longer to get my post up about the Gathering of Eagles.

As I said, I got up at 0330 Saturday morning, took a shower, got some snacks together and headed out. I fully intended to ride my bike but I was feeling very poorly and the temp was about 27 degrees when I left. I really don’t relish hospital time so I decided to do the prudent thing and drive the cage.

Traffic was light but I did have to stop a couple of times. Did I mention I didn’t feel very well? 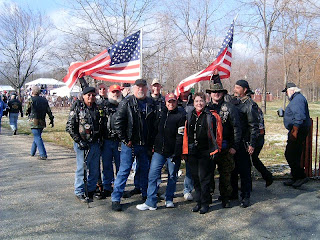 Anyway, I got to the Franconia-Springfield metro station at about 0800 or so. As soon as I got to the ticket kiosk, I noticed a patriotic looking group of people so I introduced myself and asked if they would mind if I tagged along with them. (I’m the ugly guy in the “boony hat” second from the right)

Turns out that most of them were from North Carolina and were all members of the Patriot Guard Riders. I actually did a ride with them a couple of years ago. One of the group is the Virginia State PGR Ride Captain and is good friends with the Hampton Area ride captain and my friend Woody “Rustpicker” Wagner. Another of the group is an editor of Full Throttle magazine and was there partly to take pictures and write an article for the biker mag. 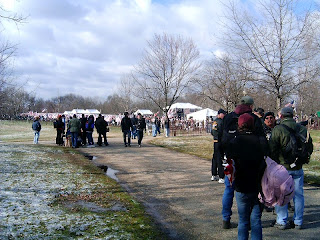 It was still pretty chilly when we got there…there was still some snow/frost on the ground…so, as we walked up on the “bullpen” for our area, I was a little surprised at the turnout.

The numbers are a bit in dispute. It seems that the NY Al Jazeera Times and some other “news” outlets reported our counterprotest to number in “the hundreds”.

I can say unequivocally that that estimate is pure, unadulterated BS. 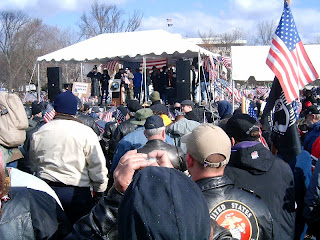 I’ve seen counts as high as 30,000. I’m not sure that it was THAT high, but I will say it was well over 10,000. It was kind of hard to nail down because GOE people were scattered all through the area “patrolling” monuments, guarding the Wall, the Korea Memorial, the WWII Memorial, lining the street to point and laugh at the antics of the “anti-war” protesters. I’ve heard that some were dedicated at Arlington to protect the memorials there so it wasn’t like we had the whole group together at any one time to count heads. In other words, although my personal impression was 10,000+, I could easily be underestimating because of the “spread out” nature of our group. I wouldn’t dismiss the estimates of 30,000 out of hand for that reason. 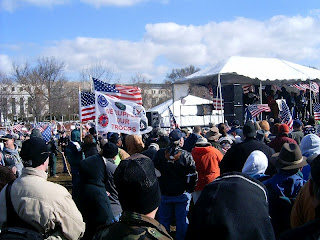 There are also reports of the anti-war protestors numbering in the tens of thousands…again, I’ve got to throw the BS flag on that one. They pretty much WERE all together and didn’t even have the numbers in their group to match those in the GOE bullpen, let alone the throngs wandering around the mall and Arlington. I would say that they numbered around 5,000 or so. In my humble estimation, the patriots outnumbered the communists by a minimum of two to one. Probably closer to three to one. 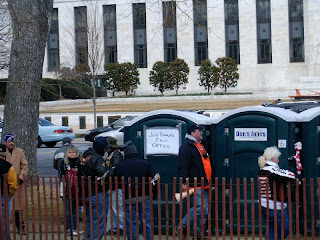 Basically most of the day was occupied on both sides with speeches, music, chanting and flag/sign waving. The one thing that the other group had going for them: they had a MUCH better sound system than we did. Had I not known better, I would have thought this was an illegal immigrant rally considering the volume and regularity at which they blasted latino music into the frigid air. 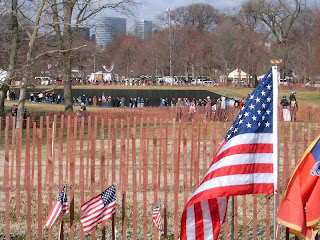 There was a three hour wait to clear the screening area the Park Police had set up to visit the wall. This shot was taken from the GOE “bullpen” area toward the wall. Beyond the wall is the street lined with “eagles”, then the mass of press vehicles (which were notably sparse near the GOE “bullpen”) and the “anti-war” protest site beyond that.

The Police presence was pretty heavy. I’m sure they had heard of some of the threats coming from the other side and of our comitment to preventing them from carrying those threats out. They were in full force to prevent it from getting out of hand. I will say that the DC police and the Park Police were very professional and carried out their duties efficiently and effectively. 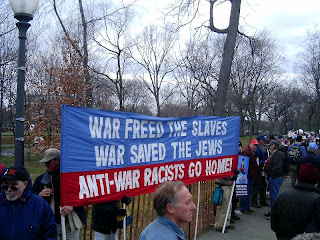 After walking around the reflecting pool to the Korea Memorial and up to the WWII memorial, I headed back down the street toward the wall and the “anti-war” protest. The street was lined with “Eagles”. Some carried signs, but most just waved flags. Chants of U..S..A….U..S..A.. would rise and then subside in response to “anti-war” protest chants. 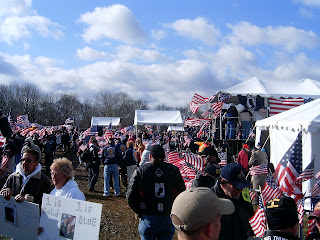 I heard of no violence, but I did hear threats of it. I heard second hand the story of what became known as “Hill 35”. Just across the street from the Lincoln memorial is an area where vendors sell POW/MIA memoriabilia pretty much year round. There is a slight hill in the sidewalk up to that area from the Vietnam Wall. The story goes that a group of protestors were walking the sidewalk along the reflecting pool and were on their way up that hill toward the Lincoln memorial area. There was a group of Eagles at the top of the hill…either waiting for an opportune time to visit the wall, buying patches etc from the ubiquitous vendors there or just keeping a watchful eye out. When the protestors were seen approaching, the Eagles…mostly veterans and bikers, simply decided that the protesters were not taking “their hill”. The Eagles stood shoulder to shoulder and wouldn’t budge as the protesters tried to make their way through. The protesters tried to breach the impenenatrable defenses once or twice to no avail and…well…suffice it to say that the protestors went AROUND hill 35 on that day. Perhaps it was 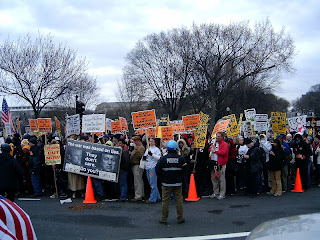 a small, maybe even petty, victory, but a victory nonetheless. Considering the brave talk coming from some of the protestors leading up to the event, when faced with the reality of thousands of battle hardened, steely eyed combat vets, their determination understandibly faltered just a little bit.

Another, slightly related, incident that happened to my group: the anti-war protest columnated with a march to Arlington and then to the Pentagon parking lot. Note the relative dearth of US Flags present in the protestor’s ranks. What do you think, SHOULD we question their patriotism? But I digress. As the march made its way toward Arlington, my little group kept pace with them on the sidewalk along the march route. The sidewalk was packed up to 6 deep with Eagles all along the route. As we kept pace with them, they shouted insults and challenges at us, some of which we couldn’t pass up. A common theme was “why aren’t YOU fighting?” The standard moonbat “chickenhawk” argument. You would think they would be smart 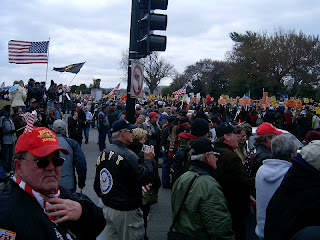 enough to realize that the vast majority of Eagles were combat vets. The standard reply, of course, was “we served…where were you?”

The protesters were very brave and challenged us regularly as long as they were in their group marching and the Police were between them and us. But, as we got close to Arlington cemetary, my group of Eagles…about eight of us…decided that we needed to be on the other side of the street.

We stepped off the sidewalk and approached the line of protesters. I don’t know if the police just weren’t paying attention to us or they wanted to see what would happen but they didn’t try to stop us. It was hilarious how quiet the line of protesters got as we approached…all the jeering and chanting came to a screeching halt…the line separated and they backed away and eyed us warily…and we walked right through their line to the other side without a word. 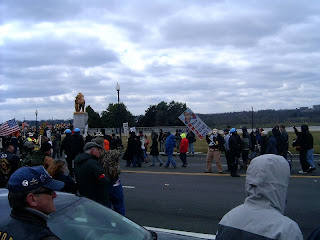 Now, I’m not saying that we expected any different or that I wish violence had ensued, but it was just very funny how quiet they got when we approached them and they thought, however fleetingly, that they may have to put their money where their trash talking mouths were.

Also notable was the sheer number of protesters that were in disguise or masked in some way or another. I must ask: If your cause is righteous and just, if you truly are being patriotic and support the troops, why do you feel the need to hide your face? Who are you hiding from?

The closest to a disguised person on the Eagle’s side was a guy who had painted his entire head up like a flag. He wasn’t trying to disguise his identity, he was simply putting a face on his patriotism so to speak. 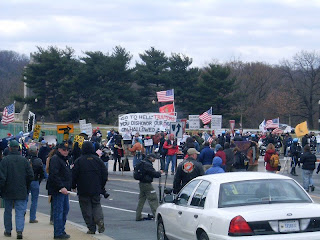 Anyway, I can say that the mission was a great success and it was heartwarming to see the true patriots in this great nation come together to defend the honor and sacrifices of our current crop of heros. I was proud to soar with the Eagles on 17 Mar 2007 and repeat the message passed from veteran to veteran on that great day: “Welcome home brother”.

Michelle Malkin has a great roundup and links to more coverage of the event.

By the way, I heard several people saying “There’s Michelle Malkin” and such but I never even got a good look at her, let alone a chance to meet her. It was just too crowded to get through…and I’ve never been much of a “famous person” sycophant anyway so it didn’t break my heart too badly.

Update: Michelle Malkin and Hot Air films has done an episode on the Gathering. It is outstanding.