I finally got around to shooting Mr. Completely’s e-postal handgun match for this month “High Fives” 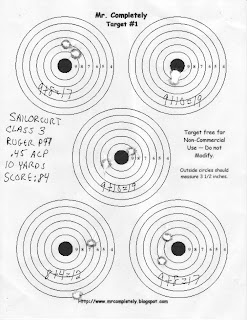 It took me four tries to get a decent showing. I ended up with a score of 84 which I’m pretty happy with.

Please forgive my kindergartenesque handwriting. Now you know why I learned to type.

I was using my standard carry piece, a Ruger P97 in .45 ACPAutomatic Colt Pistol - Denotes one of s... More. It is not exactly a target gun but it is a sturdy, dependable work gun.

I was shooting at 10 yards and I didn’t have a decent pistol rest available so I shot both sets of 5 offhand.

As you can see, I had one pretty bad flyer on the lower left bullseye. I didn’t focus fully on the front sight…a tendency that I struggle with often…and I forced the shot. That was on the second series of 5 but was the first shot of the series. I was relieved that a bad first shot didn’t throw the whole series off.

Now the interesting one:

The very first try, the very first shot, I scared myself. I shot at the lower left circle and thought there was something wrong with my pistol. I didn’t see a hole. Surely I didn’t miss the paper completely??? 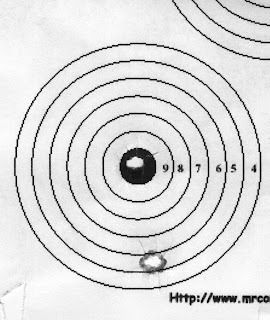 I ran the target carrier in to check and what did I find? A hole right in the center of the black.

My first thought was “if I shoot that good on all of them, they’re going to think I cheated”.

No such luck. I ran the target back out to 10 yards and proceeded to punch holes all over the darn place.

It was the worst target of the day after that first shot and I’m embarrassed to even put the rest of it up. I’m just going to show the circle where I made my perfect shot. At least the second shot was in the circle, that’s more than I can say for some of the others on this target. Sheesh!