I signed up for Brady Campaign alerts a while back in order to keep up with what is going on on the Dark Side.

They thoughtfully provided a handy tool to email President Bush, Nancy Pelosi, Harry Reid and your own Senators and Representative.

I wasn’t too enamored with the suggested letter that they provided:

I am outraged by this week’s tragedy at Virginia Tech. It is much too easy for the wrong people to get deadly weapons in this country.

It is time for you to take steps to end gun violence to prevent tragedies like the one at Virginia Tech.

What are you going to do to stop gun violence in America?

So I took the liberty of editing it somewhat before sending it off: 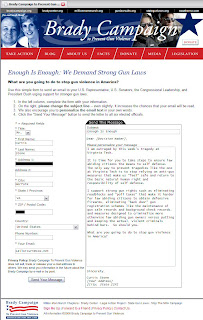 I thought it was quite thoughtful of them to provide such an easy tool with which to contact our legislators. What do you think?

I was a little concerned that the “edit your letter before you send it” was just a ruse and that the letter sent would be the Brady’s version no matter what I typed in there.

My fears have been laid to rest: I’ve already received a canned “thank you for your correspondence” reply from my Representative which included the text of my original letter.

It was exactly what I typed into the form. I can now confidently recommend that we gunnies can use Brady’s “email our government officials” tool…as long as you remember to appropriately edit the text of the email to be sent.

I still think it was very considerate of them to spend their money providing such a useful tool for us. Thanks Sarah and Paul.