I think I mentioned in a previous post that I was having some issues with the SKS after all the modifying I did. Basically, after replacing the gas tube with the Tapco model that comes with the tupperware foregrip, she started short cycling. For those who haven’t been following along on this project rifle from the beginning, that’s one of the problems I had after first getting her home. I struggled for quite some time before finding a vendor to buy a new gas valve that actually had them in stock. I ended up with the CNC Warrior gas valve. Not only did they have them in stock, but their price was VERY reasonable.

Anyway, that fixed the short cycling problem…until I replaced the gas tube with the Tapco. Now I’m back at square one.

One of the things that I ran across in searching for wisdom in fixing this problem the first time was to make a shim out of a paperclip or wire to tighten the seal between the gas valve and the gas tube. I didn’t do that back then because the gas valve that came with the rifle was corroded and pitted and obviously bad. I just replaced it as soon as I found a replacement.

Now, different story. I know that there is nothing wrong with the valve because it worked with the old gas tube. The problem MUST be the Tapco gas tube. This doesn’t surprise me overly because the SKS was made by so many different manufacturers and in so many different variations, it would be pretty simplistic to think that any one part is going to be completely interchangeable.

There is one guy who makes stainless steel replacements and can make them slightly oversized for just a case like this but I emailed him and haven’t heard back so he may be out of the business.

Anyway, I decided it was time to try the shim trick. For those of you who know this trick, you can stop reading now…I’m going to explain the procedure in excruciating detail.

Still with me? OK. Here goes:

First, as usual, I apologize for the crappy, out of focus pictures…someday I’ll get a better digital camera. 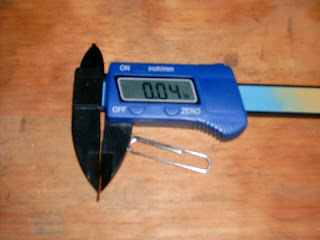 The first time I tried .020″ safety wire. It sort of worked but I was still getting failures to extract and stovepipes every once in a while. I’d get two or three in a 20 round magazine. Not acceptable at all.

I decided to try something a bit bigger. I have some large paperclips that measure about .040″ so I thought I’d give them a try. 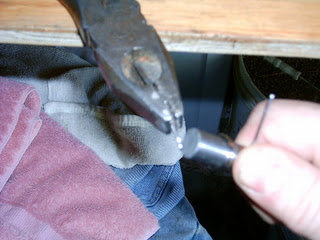 I started out by bending the paperclip around the shank of a drill bit. I found that a 7/16″ bit was just about perfect. You might be tempted to use a bit exactly the same size that you need the shim to be. The problem is that, even twisting the wire or paperclip around the bit as tightly as possible, it would still spring back out a little bit as soon as tension was removed, making the end product a little larger than the bit used. So, if you think 7/16″ is a bit too small…it’s not. 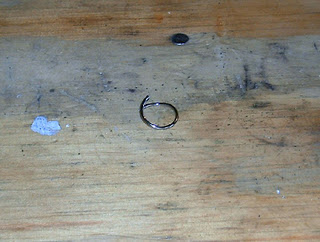 I’d make three wraps so that the middle wrap would be a nice, even circle. Next clip it down so that you’ve got just one ring but leave some extra on the end for sizing.

You should end up with a very symmetrical circle of metal…all you need to do is fit it, trim it, bend it flat and install it.

Oh, don’t know where it goes on the rife? Well, let’s explore that: 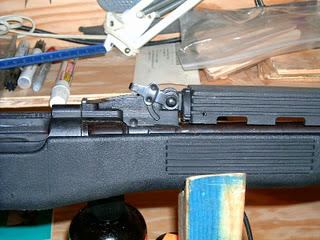 First, as usual, make sure the rifle is safed, unloaded and preferably the bolt locked back (or removed). Next, remove the gas tube. This is done by rotating the lever on the front right side of the receiver up to about the 10 o’clock position. Don’t rotate it up too high or you will release the operating rod (aka “gas piston extension”) from its recess.

Then just lift the rear of the gas tube up until it comes free. You might have to jiggle the gas tube or move the lever up and down slightly to get it to release. 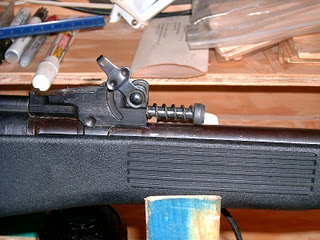 This is what happens if you raise the lever up too far. If you do this with the gas tube still installed it can make it harder to get the gas tube off and can make the operating rod launch itself across the room as soon as the gas tube is lifted free. 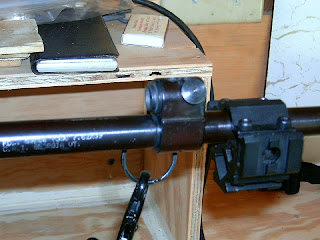 The next step is to remove the gas valve. The gas valve is the fitting that the front of the gas tube mates with when installed. It is designed to shut off the gas flow to the gas piston when launching rifle grenades.

To remove it, first press the button and rotate it so that the button is pointed is straight up. This also releases the grenade sight which I have previously removed. 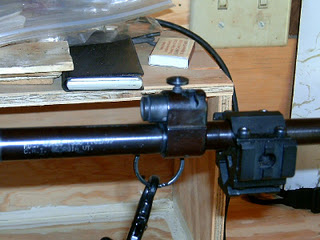 There is another slot and hole to the rear. The rear hole is slightly bigger than the front one. Press the button again and slide the valve and button to the rear. Once the button is aligned with that larger rear hole, it can be pulled free of the valve. There is a spring under there, I’ve never had mine shoot out, but it’s possible so be ready for it just in case. 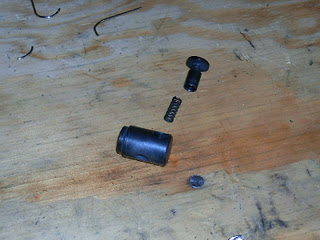 After the button and spring is removed, the gas valve just slides right out.

The shim is going to be fitted to the “nipple” area seen on the left edge of the valve in this photo. 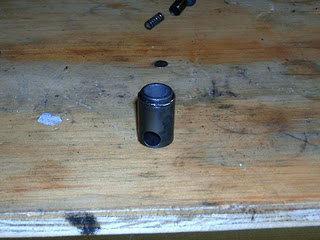 The next step is to size the wire shim to fit properly, the diameter should be just slightly small (which is good to ensure it fits tightly). Clip any excess wire off the ring and bend it as flat as you can get it with pliers.

Try to get it as exact as possible to minimize any gap once the shim is installed.

After sizing and flattening the shim, pop it on the gas valve and you’re ready to put it back together. 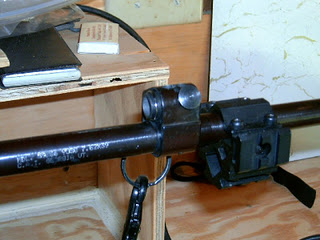 Installation is the opposite of removal. 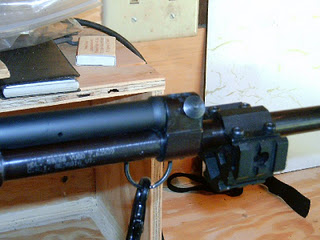 The gas tube should slide right over the shim, however, it will probably be a little harder to get the front pushed down in place with the shim in. One side effect of this is that the gas tube will be much more stable after installation so if you have any optics on your gas tube (I wouldn’t do it, but I’ve seen it done) this should reduce the size of your patterns…er…groups. 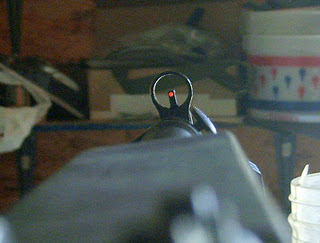 While I was at it, I took a shot of the Williams Firesight I have on the front. Nice sight picture huh?

I was holding the camera a little crooked so it looks a little weird.

As you can see, I took Nate’s advice and got rid of the picatinny rail on the top of the foregrip. I like it much better that way.

Hopefully, the rifle range will be open the next time I go and I can give you a range report on the whole project. I took it to the indoor, 25 yard range that I’m a member of yesterday just to function test it. I only did 2 mags but she burned through 40 rounds without a hiccup. I’m confident that this solved the problem.

If I ever hear back from the stainless steel gas valve guy, I’ll buy one of those, try it out and report back, but this seems to be a good fix for this problem if he’s decided to stop making them.