As usual, I didn’t personally know CW2 Moore. What little information I have about him was gleaned from various press reports, family recollections and the ceremony itself.

By all accounts, CW2 Moore was a fine soldier, patriot and family man. The youngest of seven children, he was an athlete in high school playing wide receiver for Lafayette High School. He joined the Army shortly after graduation in 1994 and married his High School Sweetheart with whom he fathered one daughter.

During his career, he furthered his education and graduated from Cameron university in Oklahoma which led to his promotion to Chief Warrant Officer and his assignment to 2nd Battalion, 15th Field Artillery Regiment, 2nd Brigade Combat Team, 10th Mountain Division.

Some reports indicate that he was rendering aid to injured comrades following a rocket attack when a second rocket struck and fatally injured him.

“Greater love has no one than this, that he lay down his life for his friends.” John 15:13 NIV

I had the great honor and privilege of participating in CW2 Moore’s funeral service as a member of the Patriot Guard Riders, my fifth such mission.

Each and every one of these missions has rendered me virtually speechless. As hard as I try to convey the emotion that these missions evoke, the gratitude with which I view the fallen hero and his family, the pure pride that I feel in contemplating the sacrifices that the few make for we many…I fear that I am simply not up to the task. I am relegated to simply recounting the events with no hope of adequately conveying the feelings that accompanied them: 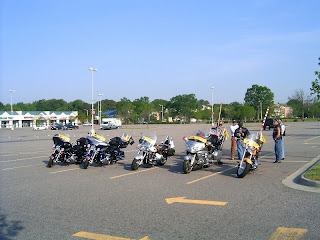 The Hampton Roads contingent met in the Super K-mart Parking lot on Norview near I-64.

After the mandatory introductions and a quick brief, we hit the interstate and headed toward the Hampton Roads Bridge Tunnel and Newport News. 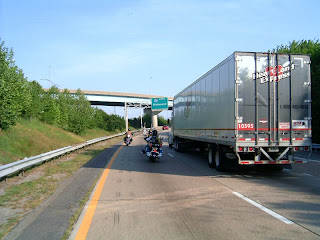 It was a workday so traffic was heavy, but flowing well. 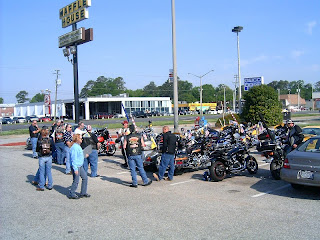 We stopped in Newport News to pick up some more riders on the way and then continued up to Williamsburg. 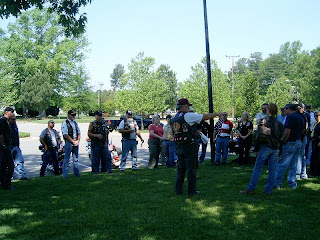 At the funeral home, we met up with riders from Williamsburg itself as well as a contingent from Richmond and other more western locales.

After a thorough mission brief from our Ride Captain, Johnny (DLIQNT (delinquent)) George… 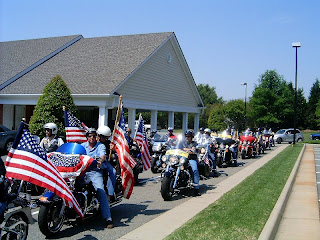 …we mounted up for the ride to the Church where the funeral was to be held.

We had a pretty good turnout. I think the final count was 28 bikes. Not an overwhelming show, but enough to properly render respects for the fallen. 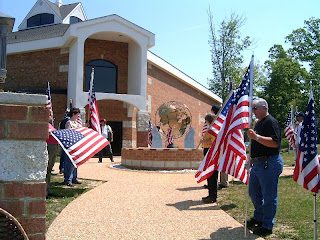 For those who are unfamiliar with the Patriot Guard Riders, the group is completely voluntary with no member dues or special requirements. Most members are veterans and bikers, but neither is required. Cagers (those people who drive 4 wheeled vehicles) are more than welcome and we always have a few non-veterans amongst our ranks.

The group was initially established to protect the family and funeral services from the religious fanatics (I won’t honor them with a link and there is no way I will refer to them as Christians or belittle the denomination they defame by claiming membership) who were protesting funerals of our fallen service members. The “protests” quickly tapered off and are virtually unheard of at this point, but the Patriot Guard has continued the missions nonetheless. With no evidence of protesters, we basically form a “corridor of flags” through which the fallen hero and the mourners pass. We do not formally participate in the ceremonies, only stand vigil over them and render respect for the fallen, the family and friends. We only attend services when we are invited by the family and would never intrude where not wanted. 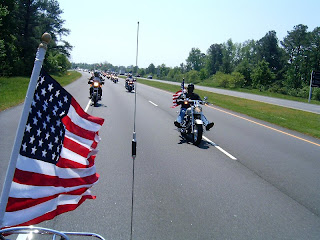 After the ceremony, as is typical, we are honored with the task of escorting the funeral procession to the grave site.

The gentleman to the extreme left in this photo was a member of CW2 Moore’s family. I didn’t want to intrude on his mourning by plying him with questions so I don’t know his exact relationship but I do know that this was his first Patriot Guard Riders mission.

It was especially meaningful to have a family member join our ranks for this mission. 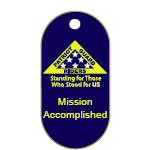 I have a personal tradition of taking one of the “mission accomplished” pins from my vest to give to a first timer following each mission. This was done for me after my first and I like to carry on the tradition. I was honored, humbled and moved to tears to be able to give a “Mission Accomplished” pin to a family member of this hero. I only hope that it helped ease the suffering of his loss in some small way. 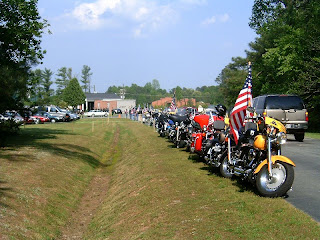 One of the most moving moments I’ve experienced in these missions occurred during the interment.

The three rifle volleys and rendering of Taps on the bugle always bring tears to my eyes and this ceremony was no exception, however, during the eulogy, a single white dove was released to fly heavenward. This represented the spirit of the fallen being freed of the bonds of earth. That single white dove and what it represented said more to me about my own personal faith than anything I’ve experienced in a long time.

My brother is a very talented Christian Music Pastor/song writer. One of his songs was originally composed while his wife’s mother was struggling with cancer. He revised the song somewhat to its present form when our own father was dying of the disease. I cannot listen to this song without crying…but they are tears of hope and happiness, not sadness. The hope that is brought out by faith in God’s plan for all of us and the happiness in the knowledge that we also will be “welcome in this place” when we arrive home.

I’m not going to embed the song into this post, but I will provide a link for your enjoyment.