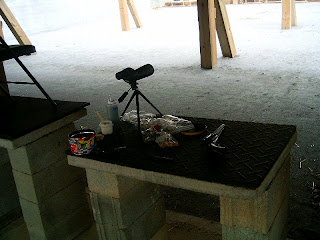 I went to the range yesterday to try my hand at this month’s E-Postal Match with my black powder revolver. It was a non starter.

I had recently replaced the nipples in the cylinder. I naturally assumed (I’ve never claimed to be the sharpest knife in the drawer) that they would be the same size as the originals and that I’d be able to use up the supply of percussion caps that I already had on hand.

They were so tight, I struggled to get them on. Then, once they were on, they would try to pop off as the cylinder was rotating. Once I got them under the hammer and fired, they would split and then jam up the works so the cylinder wouldn’t rotate.

Time seemed a little compressed because I was busy and I wasn’t closely monitoring it’s passing, but they usually have the range “hot” for (I think) about 30 minutes and then call it cold so people can check targets etc.

During the first “hot period” I got 5 rounds successfully downrange. During the next “hot” period, I got 6 rounds downrange. During the next, I tried loading a single chamber and then firing and then loading a chamber and then firing. That worked better and I got 8 rounds downrange that time but had only hit a couple of the little red circles on the target. Some of that is because I hadn’t fired the revolver for a while and was getting used to it again. The first 5 shots were way high of point of aim and I was varying the powder charge to try to get the point of impact a bit closer to point of aim. Futzing with the caps was slowing me down so much that I finally just decided that I’d had enough.

If I actually tried to complete the target I’d probably still be there banging away at a blistering rate of fire of .15 rounds per minute.

Luckily I had taken my SKS with me and had something to punch holes with efficiently in order to take my frustrations out.

I’ve gotten a couple of blog hits from people searching for information on using a black powder pistol for a “SHTF” (fecal matter impacts the rotating oscillator) weapon.

I can see how that would seem like a good idea considering that black powder can be made from scratch if need be and caps and lead are much easier and cheaper to stockpile than production cartridge ammo. However, someone with something like that coming up against anyone with modern weaponry would be seriously undergunned. They don’t have the muzzle velocity or range, they aren’t as accurate, they don’t have the penetration power and you can’t sustain anywhere NEAR the rate of fire. A break action single shot cartridge rifle would have you outgunned. Even if you did decide to do something like that, black powder revolvers are very persnickity about what caps they will work with. They vary from brand to brand and lot to lot (as my experience attests). Once you find a size, brand and lot of caps that work well with your revolver, buy a cubic butt-ton of them. And don’t change nipples on your revolver and expect to be able to keep using the same caps. 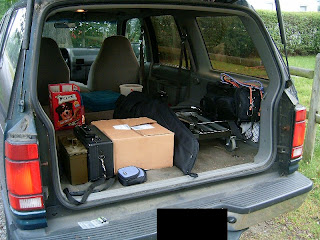 Side note: As I was loading the truck, it occurred to me that I was only taking one pistol and one rifle to the range that day (other than my carry piece which was on my hip). Does it seem to anyone else like I take a ridiculous amount of gear to the range with me?

The ammo box was 7.62×39. The black case next to that is my spotting scope, the cardboard box is all the blackpowder stuff (powder, balls, powder measure, revolver, nipple pick, nipple wrench, wads, grease, etc, etc, etc.) Then the case with the SKS, my fold up cart that I tote everything on and my standard range bag (eyes, ears, stapler, bore snakes, cleaner/lube, rags, basic tools, etc.).

The stuff toward the front of the car is always in there (toolbox, and misc “I drive an old car, so just in case…” stuff.

This is all my gear on the cart and ready to haul into the range. Normally I would have at least one more, possibly two or three more rifles, as well as ammo boxes with appropriate ammo, maybe a shooting mat, some other odds and ends…of course I normally don’t have the cardboard box of blackpowder stuff… 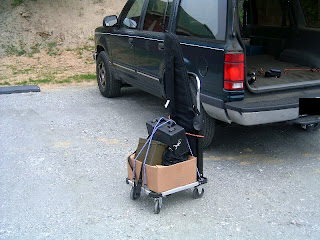 But it still just seems like a ridiculous amount of stuff. Anyone else face such a dilemma?

So much for this being a quick range report.

After posting my last range report, I’ve gotten several blog hits looking for information about the rifle range in Creeds.

I got there a little early today and talked to an employee, he showed me around a little and I took a couple of pictures. He also gave me the number of one of the owners whom I called. He was traveling and was in the airport but was still nice enough to return my call and answer my questions for about 20 minutes or so. My next post will be a detailed report on the range, where it is, what is going on there and my perceptions of it. I hope to get it up later today so check back if you are here looking for information on it.

Update: While writing the post about the range in Creeds, I realized that there were some questions that I should have asked but didn’t (I’m no “authorized journalist”). I emailed the owner but he has been traveling and I haven’t gotten a reply yet. The post is pretty much written with the exception of clearing up the last couple of questions I had. If I don’t get a reply by tomorrow, I’ll either call him back or call the range itself and get the questions answered. In short, the post will be up by tomorrow (Tuesday) afternoon at the latest.