I’ve been threatening to do this for a while but I finally found the right motivation.

My wife and I used to foster dogs for Animal Rescue of Tidewater. Basically, we would give dogs homes until they got permanently adopted. This included taking them to adoption shows every couple of weeks. Under my old blog, I blogged about some of the dogs we fostered as well as our own dog, Roxy. 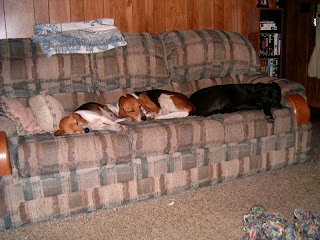 Our last two tenants were a pair of beagles that were surrendered by a hunter who had no further use for them. Neither had names and both had been used for breeding and were not housebroken. They were, however, very good natured and well socialized. We named the 5 year old 15 inch beagle “Jessica” after Jessica Simpson because she was just as pretty as could be but she was just…to put it kindly…not too bright…

The 8 year old 12 inch beagle we formally named “Charlotte” because she reminded us of my brother’s pet beagle of the same name…but my wife quickly took to calling her “Little Momma” and the nickname stuck better than the formal name.

We still fully support the fostering program, but it just got to be too much for my wife. She would get too attached to our foster dogs and it would cause severe emotional distress every time one got adopted and moved on. 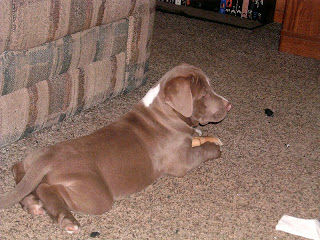 We finally decided that she just couldn’t keep doing that to herself so we decided to adopt a puppy, limit our stable of dogs to two and stop fostering.

The puppy was one of a litter that one of her co-workers was trying to get rid of. We felt that, although this dog wasn’t technically “abandoned” we were still rescuing him. He is a Lab/Pit Bull/Dalmation/Boxer mix. In other words…a mutt. And he is just as cute as can be.

We named him “Buddy” partly because the person we got him from had already been calling him that and it just seemed to fit…partly because he is the constant companion of our older dog Roxy…who is a Lab/Pit Bull mix that we adopted from the SPCA a couple of years ago. 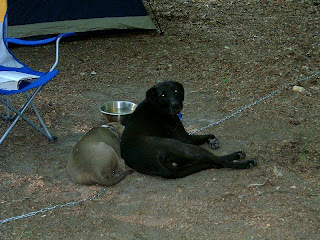 Over Memorial day weekend we went on a camping trip with My daughter and her family and took the dogs with us. They didn’t enjoy being chained the whole time but they didn’t do too badly. They displayed no discomfort around the other campers and the only thing that got them riled up was when they saw people walking any of the other myriads of dogs that were there that weekend.

They seemed to enjoy lounging around in the dirt and their anti-bug treatments seemed to have been effective because I think they were the only ones there who DIDN’T get a tick or two over the weekend. 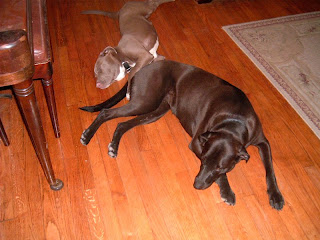 It seems like the only pictures we have are of them laying around and sleeping, but with my digital camera, action shots are pretty much out of the question. I press the button and the camera takes a good 3 seconds to focus and take the picture by which time, they are either in the wrong place and out of focus or are out of the frame completely.

Buddy loves his Roxy. Everywhere she goes, he is right on her heels. They love to wrestle and play tug of war with old socks…although we have to be careful because Buddy is a sock thief…he will steal good socks out of the laundry to play with if we aren’t careful. A minute or two with him and they are no longer “good” socks. 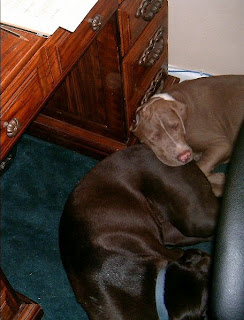 Anyway, what finally encouraged this post was this last picture. I was in the office this morning and they decided they wanted to be close to me while napping. Roxy laid down behind my chair and Buddy squeezed in wherever he would fit and used Roxy as a pillow. It was so cute I just HAD to get a picture of it. I took the shot without moving from my chair by holding the camera up pointing back and down over the armrest of the chair. I knew that if I got up, they would get up and ruin the shot. It isn’t perfect because of the angle and lack of fine aim, but it still works for me.