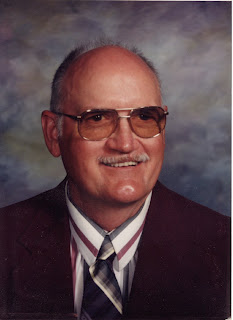 I can only dream of being as eloquent and entertaining a writer as Lawdog, but his father’s day post really got me thinking. What actually made the connection was the similarity between his father’s penchant for peppers and mine.

My father’s personal trick was to pick green tomatoes early in the summer and can them with about three different kinds of peppers. I don’t even know which varieties he chose but I do know that his policy was “the hotter the better”.

He would then leave the canned tomatoes and peppers alone for at least a year. Something about the tomatoes caused them to absorb the acids from the peppers. After opening a jar of his Frankenstein creation, you could pull the peppers out and eat them with no noticeable discomfort (and little flavor), but those tomatoes….

He used to sit at the kitchen table during meals and eat one or two of those green tomatoes every dinner time. Sweat would pour down his substantial forehead and his face would turn red as he ruminated and reflected upon the quality of his culinary concoction: “Ahhh, 1974, that was a good year for peppers.”

I tried one once.

After recovering consciousness I vowed to never make that mistake again.

Much like Lawdog, I have gradually evolved into someone who has to be careful when preparing food for others lest I make it so hot they can’t eat it. Sadly, I never got the secret recipe from my dad. I do know how to can and I can grow my own tomatoes and peppers so perhaps I could just experiment my way into his secret…that’s how he discovered it in the first place. The key for him was to use the right mix of peppers to create the perfectly nuanced flavor in the tomatoes. At the time I couldn’t imagine how he could glean any flavorful distinction from something so hot that it immediately anesthetized one’s taste buds…but now that I’m older and my palate has matured, I think I know exactly what he was talking about.

Also, much like Lawdog…if anyone had accused me of being “like” my dad in any way as a teenager, there would have been trouble. I was a rebel and didn’t like being told what to do by anyone…especially my dad. Little did I know that it was the independence and stubbornness that I inherited from him that caused this trait.

Now, when people say “you look more and more like your Dad every day” I feel a distinct sense of pride, humility and responsibility. I’m now as proud to have the honor of resembling him as I am to have the honor of being his namesake (my middle name). But I’m humbled and feel a great sense of responsibility because those are some massive shoes to fill. You see, my father was not only a great father, but he was a great man.

Not great in the sense of a Winston Churchill or a John F. Kennedy…MUCH greater than that.

My father was a man of Honor. That is the greatest complement that I can imagine and I don’t offer it lightly. Everything he did, he did to the best of his (sometimes meager) ability. If something he did was not up to someone else’s standard, it was never due to lack of effort. He never failed to live up to a responsibility or commitment. He was far from perfect, but when he made mistakes, he readily admitted them, took responsibility for them and immediately set to making it right in whatever way he could. He epitomized the old adage “my word is my bond”. If he told you he was going to do something, you could take it to the bank; it was getting done. He was a large, powerful man but had not a malicious bone in his body. He was no sucker, but he would give anyone the shirt off his back if it was genuinely needed.

I could go on and on about him. but I don’t want this to run on too long but I also want to mention just how many people he affected in his life. He was a strong Christian and never hesitated to share his faith and give the glory to God. Even when he knew he was dying of cancer, he never expressed any doubt or fear, he never asked “why me?”, he never prayed for miracles. What he prayed for was “God’s will be done.” His determination that God’s plan took precedence over his own personal suffering and even death, in and of itself, touched more people than I would have believed. After he was finally called home, the line at his viewing stretched out the church doors and into the parking lot. People stood in that line for up to three hours to pay their respects. The service itself was standing room only and the line of cars from the Church to the site of his interment was the longest the funeral director had ever seen. This is in a town of about 4,000 (at the time). He touched so many people in his life and all in such a positive way.

My father was a great man.

I’m crying now so I’ve got to stop.

I love you Dad and I miss you.