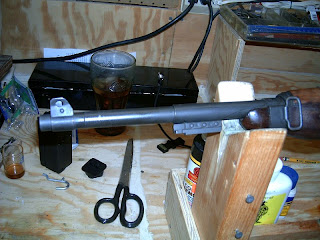 One thing I did when ordering the bolt tool, gas piston nut wrench and extra extractor spring plungers, is order a book on the production history of the M1 Carbine.

I have no doubt that my Carbine has been rebuilt at least once over the course of its 63 year life, but I still want to get an idea what parts my be original, what has definitely been replaced, what is out of place for the period of manufacture, etc.

To be perfectly honest, I know that there are many different parts variations, but at this point I don’t even know enough about M1 Carbines to know what to look for.

With that in mind, and also just to get a good starting point, I took a bunch of pictures of the rifle to catalog its condition and any distinctive markings. 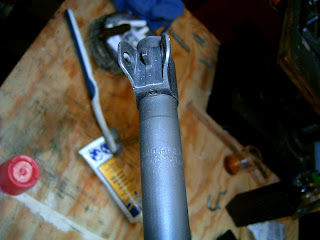 I started out by taking pictures of the rifle fully assembled.

Parkerizing is actually in pretty good shape. This rifle doesn’t seem to have seen much use after its last refurbishment.

There is some wear on edges and at contact points, but very little otherwise.

As you can see, this rifle is equipped with a bayonet mount. It is possible that it was added sometime after initial manufacture.

The stock shows a lot of wear but no cracks or “show stopper” problems. It has a couple of pretty large gouges in the foregrip area. It is a “FAT” stamped stock. I’ve heard of some people getting these rifles with GI stocks but not many. 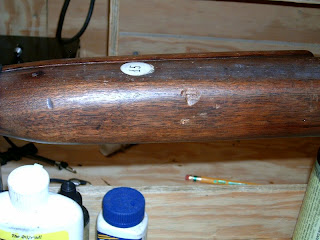 It also has a round sticker with the number 15 on it affixed to the side of the foregrip. This looks like it may have been some sort of unit inventory or rack number.

If any readers have purchased a CMP Carbine, have you noticed anything similar? Any insight as to what it may signify?

In addition to the wear and dirt, there are some pretty distinct wear marks on the butt from the sling.

I would imagine that those would be quite common. 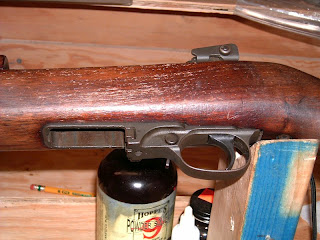 I’ve been trying to decide what to do with the stock.

This rifle has a lot of “character” but I want her to look good. My Garand is a beautiful rifle and I’d like her little sister to be just as pretty. Since she’s been in service and has obviously been rearsenaled at least once, I wouldn’t imagine she’d have any particular collector value…especially with a fat butt…I mean…with the “FAT” stamp on the buttstock.

IN short, the stock is sound but ugly and dinged up.

My choices are obvious:

1. Leave her just like she is…character marks and all.

2. Smooth/repair the dings and refinish the existing stock. 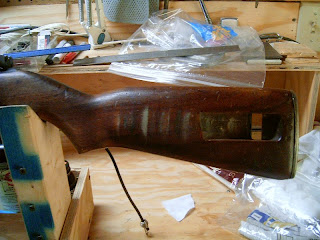 3. Get new furniture and hold on to the originals for future re-installation.

As I said before, I’d really like to clean her up. Option one would pretty much rule that desire out.

If the stock she’s wearing now has no collector value at all…the Italian markings don’t mean much to me emotionally (we wouldn’t even be having this conversation were she wearing her originial USGI furniture)…then option two is very tempting because it is the most economical choice. But it is so permanent, after it’s done, it’s not un-doable.

Option three is the most expensive but the most flexible. I can get any type of stock I want her to wear for now and then put her back to original in a matter of minutes if the need arises.

What say my readers? Is there any reason to keep the original stock as-is or is refinishing a good choice?

Next Up: Disassembly into major groups.