Now that Mr. Completely’s E-postal match for the month is over, I’ve got time to continue the series on my new old CMP M1 Carbine.

In this edition, we’re going to disassemble the bolt.

Disclaimer: Being the slightly over-confident, independent, farm boy, redneck that I am, I performed the entire disassembly and reassembly of the M1 carbine with no special tools (or special knowledge…or special intelligence for that matter). If you choose to duplicate my stupidity, I hereby lawfully declare that it’s not my fault if you can’t get it back together, break it, lose tiny parts or otherwise can’t get the darn thing to work anymore after you finish.

Save yourself some stress and heartburn and get, at a minimum, the Bolt Assembly/Disassembly tool and the Gas Piston Nut Wrench.

I have ordered both from the CMP’s e-store, but I haven’t gotten them yet. I’ll post a review and new and improved (and hopefully much easier) bolt disassembly/assembly instructions after I get them. 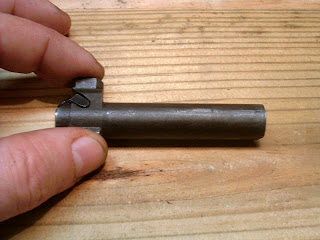 My carbine is a fairly high serial number and was produced pretty late in the war. The barrel is dated 9 – 44; that isn’t necessarily the same as the date the receiver was produced but it should be fairly close.

Because it was a later production it didn’t surprise me that it came with a round bolt versus flat.

The assembly/disassembly should be identical, because they were very similar in every respect other than aesthetics.

I’m actually not disappointed at all that my rifle has the later features. Although the collector value is increased with earlier features, the later revisions were generally improvements and made the rifle function better and more reliably. I didn’t buy this rifle to look at, but to shoot so the later features are a plus for me…but I digress. 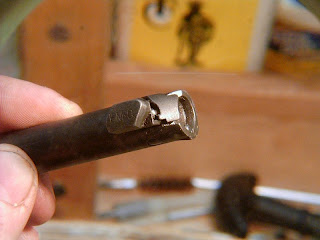 To be honest, disassembly wasn’t nearly as difficult as assembly. It wasn’t exactly a piece of cake, but it wasn’t nigh unto impossible like assembly was.

Therefore, the primary goal of disassembly is to remove the extractor (sounds easy, doesn’t it?). 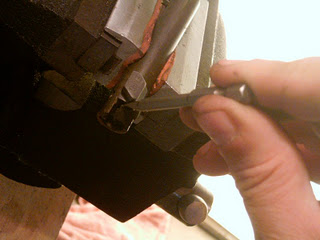 When I performed this evolution, I had to simulate for the photos because actually performing it took all three hands.

I initially tried to hold the extractor in my hand while also retracting the extractor spring plunger and prying out the extractor. It rapidly became obvious that that wasn’t going to work.

At that point, I clamped the bolt body into my padded vise jaws. I used a very small screwdriver tip to pry the extractor spring plunger out of the way. A jeweler’s screw driver would have worked but I was just feeling this evolution out as I went and the long but narrow screwdriver tip was the weapon I chose for this particular battle. 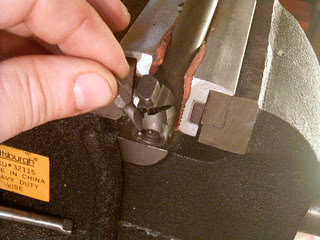 While holding the spring back with the long narrow bit, I then took another screwdriver bit and used it to pry the extractor out of the bolt.

It took me about 3 or 4 tries before I found the exact right combination of screwdriver bit positioning and movement to get the extractor out. 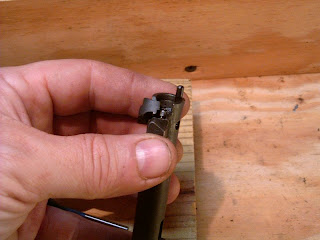 As soon as I got the extractor released from the evil clutches of the extractor spring plunger, I stopped prying. I didn’t want to just pop the extractor out and have all the other springs and sundries flying all over my garage workshop.

I released the pressure on the extractor spring plunger, placed my hand over the bolt face to keep anything from flying out and then GENTLY removed the extractor.

The ejector immediately attempted to violently depart the bolt face but I had my hand at the ready, heinously restraining it from achieving the freedom it so desperately sought.

The only things we have left to disassemble are the stock group and the receiver group. I didn’t actually completely break them down and only removed things that I wanted to clean and inspect (or clean and inspect under) so I’ll probably combine the post about them.