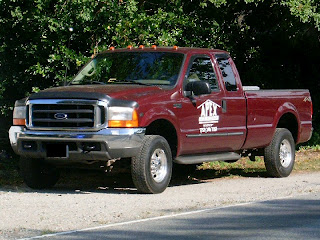 Update: She’s home. It’s a little crowded in front of my place at the moment…actually, it’s beginning to look like a used car lot…Eggleston Services is supposed to pick up the Explorer on Monday so until that parking space is free, I’ve got to park her in front of the bushes.

I’m going to Church tonight so I’ll try to get a shot or two of her “bad side” while I’m in a nice open parking lot just so you can see why I got such a good deal on her.

I got a great deal on a great truck. It has fairly high miles and a couple of relatively minor issues that got it into my price range.

It belonged to a self-employed local businessman and has 169,500 miles on it. Even with those miles NADA lists it between $10,650 and $13,300. It was hit in the rear end and had the bumper replaced, the right rear behind the tire is a little crumpled as a result of the accident, but not horribly so. The remote door unlock doesn’t work (except, he says, when it’s really cold out…figure that one out) and it has one of those electronic thermometer/compass thingy’s in the mirror that doesn’t work. Otherwise it is a beautiful truck.

Spray in bed liner in the full size bed, tool box, overcab running lights, running boards, tow package, power everything, leather seats, cruise, cold A/C, shift on the fly 4WD. The interior is in beautiful condition and very comfy, it runs and rides great. Brand new all terrain tires that are surprisingly quiet on the road. Aftermarket flowmaster exhaust that sounds great. It has the reverse opening rear doors for access to the back seat. As a company vehicle, he maintained it meticulously and it is in perfect mechanical condition. It rides extremely well for a big truck. All that for $8,500.

I don’t think I could have asked for a better truck. It is at the extreme edge of my price range, and if it hadn’t had the ding in the back I probably wouldn’t have been able to afford it so for my purposes, the bent up back end was a plus. I got a much nicer truck because of it than I would have otherwise been able to afford. Besides, I can spend up to a couple of thousand dollars getting the bodywork done and the couple of minor things fixed that don’t work and have a perfect truck worth at least what I’ve got into it and maybe up to $3,000 more.

I didn’t even haggle. I was so overwhelmed by how nice it is other than that one blemish, I just gave him the check. I’ll get it titled and tagged and insured tomorrow at lunch and I’ve already arranged for my son to take me over there tomorrow evening to pick it up.

Other than the fact that I’m going to have another car payment again (something that I haven’t had to worry about for quite a few years)…albeit a relatively small one…I couldn’t be happier. I’ll be sad to see the trusty old Explorer go…we’ve done a lot of miles together…but I’ve got a REAL truck again. I’m so happy.

More Pix from the Church parking lot where I had more room to work: 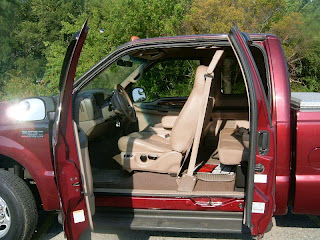 I grew up with farm trucks. My last pickup was a 1969 F-100. It seems almost decadent to have an interior as nice as this on a truck. 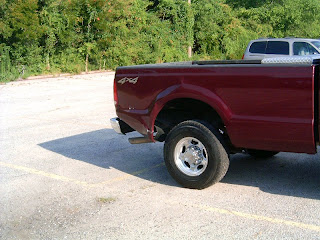 Now the not so good. To be honest, I’m actually thankful for the damage because without it, It would have been out of my price range. Personally, I think it would be fixable for a reasonable amount. I can’t afford it right now but who knows what the future holds? 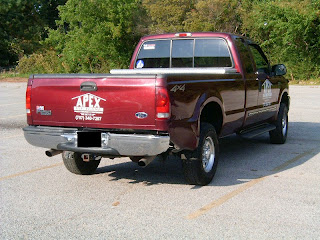 Besides, it doesn’t look all that bad with the damage and it doesn’t affect performance or utility in the least. I mean…it is a truck after all. What’s the point in having a truck if you don’t beat it up a little bit?

Now for the next trick: getting the rolling billboards off the sides and back. Thankfully, it is that vinyl tape, not paint; so, with strategic application of the ol’ lady’s hair dryer, I don’t think it will be too hard to get off.

Elaborating on the “our house looks like a used car lot” angle: At current count, in a household with two licensed drivers, we own 6 vehicles. Two motorcycles, two cars, one SUV and one pickup. Of course the SUV is DOA and on its way out and one of the cars is my project 1970 Mustang fastback which I, incidentally, haven’t had time or money to do much projecting on for the past…um…well…quite a while now. So many expensive hobbies, so little time or money.