I am a Christian and am an active member of Virginia Beach First Church of the Nazarene. I was raised a Wesleyan and have been a member of a Presbyterian church as well. I’ve never been much of a “bible thumper.” I don’t wear my faith on my sleeve or try to browbeat others into submitting to my God. I’ve never felt that that was my role.

I am, however, not afraid to speak about my faith and beliefs and this is one of those times that I just have to share.

I truly believe that God provided and led me to the truck that I recently bought.

Here is the story. My Explorer died last week as most of you know. It was a venerable old beast and has served me well and faithfully for many years, but she finally had just had enough. The transmission gave out on the way home. Well…I was pretty sure that the tranny was toast and would cost more to repair or replace than the old girl was worth so I almost just called Eggleston Services to come pick it up without even having it looked at. But, as I always do, I prayed for God’s guidance and for His will to be done.

Well, I ultimately decided (was led?) to call Cottman Transmission and see how much it would cost for them to take a look at it. I’d hate to get rid of it and forever wonder if the problem might have been something simple and (relatively) inexpensive. Lo and Behold, Cottman doesn’t charge for evaluation and estimates. I went ahead and had them tow the thing over there to take a look.

Well, it turned out that I had been right all along. They assured me that this would be a MINIMUM $1700 repair. Considering the vehicle is only worth about $1200, that was a non starter. Since they didn’t do any work, I did have to pay them for the tow, so at lunch time I took a drive over there to settle up. On the way, I happened to notice a pretty nice looking black F-250, full size bed, extended cab, on a car lot with “96” in the window. I thought to myself “self…I might be able to afford that truck…it’s exactly what I’m looking for…I think I’ll go take a look at it”. So, after paying Cottman, I went back to the dealer.

It was one of those rinky-dink fly by night kind of places but if you’re careful and don’ t finance through them, you can sometimes do OK with them. Anyway, to get to the point, the truck was OK, but not great. The interior wasn’t in great shape, there was a little surface rust here and there…nothing serious but enough that it would need to be cleaned up. It ran well, but there was a little vibration in the brakes…probably a warped rotor or drum…and the suspension was a little loose. It did have power windows and door locks, A/C, big brand new tires, a spray in bed liner and a couple of other aftermarket improvements. He was asking $8995. I thought that was a little high but I decided to check NADA, get the VIN and run a carfax on it and think about it.

I went home and looked it up. It came out under NADA, after factoring mileage and calling its condition “low retail”, at about $8300. It did have the new expensive tires on it, the spray in bed liner and the extras, so I thought if I could get him down to $8500 I’d probably go for it. I’ve been wanting a truck, this one looked pretty good, had all the features I was looking for and was in the price range (barely) that I thought I could afford. It wasn’t bargain, but it wasn’t a rip-off either.

I called the Credit Union and had pre-approval for a used car loan on the spot. I could pick up the check that evening.

My plan was to go pick up the check, go drive the truck again, talk him down to a max of $8500 and buy the truck. One of my bargaining points was going to be finding similar trucks in the area for sale for less than he was asking. The only other F-250 in the ballpark I found in the paper was a red 2,000 listed for $8500. I immediately assumed that there was something serious wrong with this one because it was priced so far below NADA value but I figured I could use it for bargaining purposes. Armed with this information, I headed to the credit union right after work.

When I got there, I walked up to the information desk and told them I was there to pick up a pre-approved loan check. They told me “sorry, the system is down. You can try back in an hour or so.”

Ugh! I was a bit frustrated, but I decided to go ahead and go to the dealer and finish my negotiations with him.

I pretty easily got him down to the $8500 I was looking for but after I agreed to that price he said “of course, that doesn’t include taxes, tags, title and a $195 processing fee.”

I said “why isn’t your processing fee included in the price?” He started his tap dance about all the effort that goes into the title and tags and all the other administrative functions he’d have to do. I said “that’s just an expense of doing business, 7-11 doesn’t charge a processing fee for having to do inventory and restock the shelves and file sales tax reports etc…that’s just a part of their business just like the admin stuff involved in a car sale is a part of your business”. Anyway, after going back and forth for a few minutes, he basically said that if I won’t pay his processing fee he won’t sell me the truck. I don’t know why I didn’t just say “OK” and get up to leave…I guess at the time I was afraid to let this one go for fear of not being able to find another truck that fit the bill so well; I didn’t sign or commit to anything, but I told him I’d go pick up the check from the credit union and think about it some more. He seemed to think that he’d made the sale but I was serious…I wanted to think about it some more.

I went back to the credit union. The system was now up but the line was pretty imposing. By the time I finished up there and had the check in hand, it was almost the car lot’s closing time. I decided to go home and sleep on it before making the deal.

After getting home, I pulled the listing for the red 2000 F-250 out of my pocket and thought…you know, it wouldn’t hurt to call them. For that price I’m sure it needs a lot of work and if it doesn’t it will surely be sold already…but it never hurts to check it out. I called, he still had it, told me some of the details and I arranged to go over and see it that night. The rest is history. (as described in the previous post).

Now, here is why I think this was God looking out for me and finding me a truck.

1. I have wanted a pickup for quite a while. I’ve looked off and on for one with all the features I want that is in my price range and I’ve never found one that I was satisfied with; I was always having to compromise away something important to me to get to the price I could afford. What are the odds that I’d find two on the same day?

2. If I hadn’t decided to have Cottman check out the explorer, even though I was convinced that the Tranny was shot, I’d have never seen that black truck.

3. If I hadn’t seen that black truck, I would have never checked the paper for other trucks. I had pretty much resigned myself to waiting for a few weeks before looking for anything and I didn’t have high hopes for finding anything quickly, it was just seeing the one that SEEMED right for me that got me looking in the paper.

4. If I hadn’t found the black truck, I would have never applied for the loan pre-approval.

5. If I had been able to pick up the check and had had it in my pocket when I went back to the dealer, I probably would have bought the black truck then and there. I may have given in on the processing fee, I may have met him in the middle or held out completely, I don’t know how it would have played out…but I was so worried about not being able to find another that fit the bill in my price range, one way or another, I probably would have left the lot with that truck if I had had the check with me. At the time, I was thinking that God had led me to THAT truck. Because the bank couldn’t give me the check right away, it gave me the opportunity to think about it some more.

6. If I hadn’t had the time to think about it I would have never called the listing for the truck that I ended up buying and I wouldn’t have gotten the great deal on a great truck that I got.

As a humorous aside, the next day while I was at the courthouse paying the city taxes on my new truck, the car dealer called me back and asked what was going on with the check. I told him I’d picked it up but had had second thoughts about the truck. I told him that I didn’t like that $195 processing fee after we had already negotiated the price. He then started tap dancing and backing down about it. He had thought he was in the strong position the day before so he flat out said that he wouldn’t sell me the truck if I didn’t pay the fee. After he realized that I wasn’t quite so easy, he offered to “meet me half-way” on it. I took a little pleasure in informing him that he was too late, I’d already found another, better, newer truck for the $8500 I was willing to pay and “didn’t even have to pay a processing fee…”

He hid his annoyance pretty well but I could still hear it in his voice as he told me goodby.

So anyway…take it as you will. Karma, pure luck, coincidence…whatever. As far as I’m concerned, it’s a God story if I ever heard one. Thanks, God…You’ve always been there when I needed You. 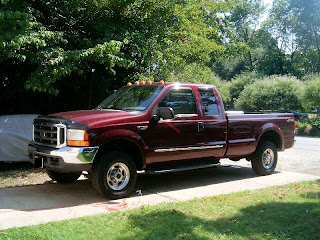 By the way…I got the logos off the sides and back with no trouble. The warm air softened the glue enough to get them off, then a quick wipe down with “Goo Gone” to get rid of any residual adhesive and she’s pretty as can be.