In the past few days both Lawdog and Jay G. have posted about their family heirloom guns. I’ve mentioned my heirlooms before but I don’t think I’ve ever posted pictures of them.

These were my Grandparents guns on my Dad’s side. They purchased them for self-defense when the family still lived in the mountains of Tennessee. Apparently there was a lot of bootlegging going on there at the time and there was a big problem with nefarious critters causing problems. After the family moved to Indiana and a better climate, criminally speaking, I think they pretty much got put in the attic and forgotten. None of them were in very good condition when they came into my father’s possession in the early ’70s. 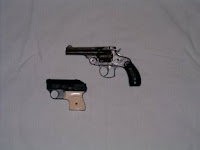 The top one is a S&W Double Action .32 top break. I believe that this was a variation of the model 3 so it didn’t have a model number of its own (someone feel free to correct me if I’m wrong). This particular specimen has approximately zero percent of its original finish (unless you count rust as an original finish). I’ve oiled it a few times to prevent further deterioration but I really need to take it apart and clean it up before it rusts away to nothing. Anyway, these were manufactured from 1880 to 1919. This one has a pretty high serial number so it was probably made early in the 20th century.

The bottom one was my Grandmother’s. It is an Italian .22 blank firing pistol. I’ve seen a picture of one with a red plug in the “barrel” but this one is missing the plug. I believe my grandmother carried it in order to “feel” safe but she never wanted to shoot anyone so she wouldn’t carry a real gun. Yes, I know how dangerous that is…considering that she passed away when I was 7, she never asked for my counsel on the subject. 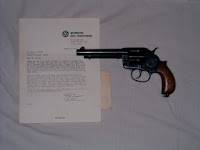 This one is the real prize. It is a Colt Double Action Frontier model in .45 long colt. It was in bad shape when my dad got it so he had it refinished and hand made new wooden grips for it. It isn’t worth anything because of that and it is not in good mechanical condition either. The cylinder doesn’t lock up so it isn’t safe to fire. My grandfather used this gun for self-defense on more than one occasion. I heard the stories when I was young but don’t remember enough detials to recount them here. I’ll have to have my Uncle Ron write the stories down so they aren’t lost in the dustbin of history.

The letter in the picture is to my father from Colt Industries dated March 4, 1971 and details what they knew about its history. It was produced in 1895 but most of their records were lost in floods during the 1930s so they didn’t have much in the way of details.

Even though these guns have little monetary value and are not safe to fire, the family history involved makes them priceless to me.

I’ve got some other heirlooms that are very meaningful to me but not firearm related so those are for another post.