Update: You know I’ve gotta throw some reciprocal linky love to Sayuncle…especially because he coined the term I used for this category label. Standby for Unclelanche in 3…2…1…

Update2: More Linky Love from Tam this time. I could use the ol’ hit counter as a fan right now. I’m on a pace to set a personal single day record (not that that’s saying much, Tam probably beats my weekly hit count in a couple of hours; but, hey, it makes me feel good).

Every time I see a story like this, I’m reminded of why I don’t watch network news…it’s bad for my blood pressure.

Traction Control, Thirdpower and Sebastian have already dissected most of the issues…for example that AK-47s are NOT available for $200; that police are NOT “required” to spend $1000 on ARs unless they choose to do so, as they could purchase the same AK style firearms as anyone else for less than half of that; that most (if not all) center-fire rifle loadings can penetrate police body armor; that the supposedly select fire UZI depicted at the end of the piece most likely was not capable of full auto fire, and, if it was, the thug depicted as the owner was most likely in violation of several federal laws by possessing it.

I would also like to point out that, even if the UZI were capable of fully automatic fire, it is NOT capable of dispensing 600 rounds at “the flick of the trigger” as hysterically charged in the video. Firing 600 rounds from an UZI with anything approaching standard magazine capacities would require between 12 and 20 magazine changes.

But I want to get down into the weeds and point out a couple of other problems:

In the video, they consistently showed the firing of fully automatic weapons in their demonstrations…implying that full autos are the firearms they are referring to as “favored weapon of…the common criminal”.

Then, they displayed a table full of firearms. In the Actual audio, the “reporter” said “The Broward Sheriff’s office confiscated all 25 of these weapons within a week’s time. These two are versions of the AK-47…”

My attention was immediately grabbed by the obvious fact that the printed transcript on the web page didn’t match the audio.

The transcript read “The Broward sheriff’s office confiscated 25 of these weapons in a week’s time. Two are versions of the AK-47.”

Now, some may say that that is just nit-picking, but I contend that it was intentional. Read the whole section in context:

Especially when the gun on the other end of the fight is an AK-47, favored weapon of terrorists and, these days, the common criminal – used to rob grocery stores and donut shops. Last month, one was used to shoot four Miami-Dade police officers during a traffic stop, killing one.

The Broward sheriff’s office confiscated 25 of these weapons in a week’s time. Two are versions of the AK-47.

They start out talking specifically about AK-47s being used to shoot four police officers and then slide right into “the Broward sheriff’s office confiscated 25 of these weapons in a week’s time”…implying that all 25 of the confiscated weapons were “these”…i.e. AK-47s. The final sentence “Two are versions of the AK-47” is only confusing in that context…could be construed to mean that the other 23 were ACTUAL AK-47s and that the “two” were different versions of the same thing…and was probably only left in to provide “plausible deniability”.

It seems clear to me that the printed version was fully intended to imply that the Sheriff’s office had confiscated 25 AK-47s in the last week and if one didn’t watch the video, that is exactly the impression that is left.

The variance between the actual audio and the transcript can be interpreted in no way other than intentionally misleading. 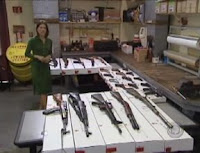 Upon close scrutiny of the video (screenshot to the right…click to make bigger), the first thing I noticed is that they can’t count. There are only 24 firearms on display (there is one more directly behind the “journalist” that you can’t see in this shot…I have another shot but you still can’t see it clearly, it looks like possibly an UZI or MAC-10 type weapon but it is very unclear).

The second thing I noticed was the dearth of AK-47s in the picture. So what exactly WERE confiscated by the Broward Sheriff’s office?

14 are handguns (including the one behind the “journalist”), one looks like a tec-9 or something similar.

I can’t see the guns in the back very well but here’s what I see of the long guns…feel fee to correct me if you see anything I’m missing:

-One definite SKS with a detachable mag.
-One possible SKS. The gas tube looks like SKS, but I don’t see the box mag and the receiver doesn’t look quite right. Sporterized SKS perhaps? It’s definitely not an AK though.
-One ARArmalite Rifle - The official designatio... More variant
-One pump shotgun
-One black powder muzzle loader
-One possible semi-auto shotgun
-One M1 Carbine
-Someone will have to help me out with the one in the middle in the back…I’ve got no idea about that one. It looks like some sort of long pistol with a detachable rifle stock
-Possibly a winchester style lever action or an over/under shotgun
-Possibly a pump action .22

Of the 24 displayed weapons that the article implied included 25 AK-47s…only ten are long guns of any type. One is definitely a shotgun and possibly two more. One is a FREAKING MUZZLE LOADER. The only three that could possibly be construed as being among the class of weapons commonly misrepresented as “assault weapons” are the SKS with detachable mag, the ARArmalite Rifle - The official designatio... More variant, and possibly the Tec-9 (or whatever that one is).

So, in support of the premise that AK-47’s are a problem on the street and are “the favored weapon of…the common criminal”, not one could be shown to have been confiscated recently?

Just out of curiosity…in their “demonstration videos”…you know…the ones where they fired fully automatic weapons just like NONE of the ones on this table…I wonder why they didn’t show their firearms expert “spraying bullets” with the muzzle loader in the display???

Not to mention the minor detail that they didn’t mention WHY any of these weapons were confiscated. Were they actually used in violent crimes? Somehow I doubt it.

“Authorized Journalism” at its finest: Misdirect, obfuscate, mislead and…if all that fails…throw in a lie or two for good measure.

And they wonder why no one’s watching.