A month or so makes.

The last time I babysat for my youngest granddaughter, she was afraid of the dogs. Not terrified mind you, but they were intimidating to her so when they got close to her, she would back away until she was cornered, then they’d get close and lick her and she’d start crying and trying to get away from them.

I watched her again for a couple of hours yesterday so my son and daughter in law could go to Cirque Du Soleil (yes, I had to look up how to spell it…I had thought they were saying “circus olay” or something like that).

This time she wouldn’t leave them alone. 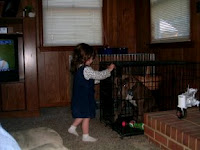 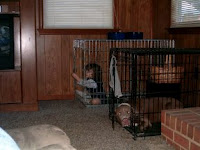 Then when she got bored with that, she shut herself in the kennel. 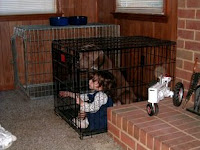 But even that wasn’t enough. Then she decided to join them…first Buddy. 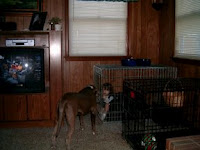 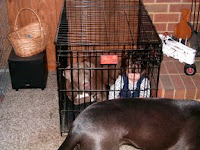 What’s funny is, whenever she would get in a kennel with one of them, the other would stand anxiously outside like they were saying “Hey! What about ME?”

And then, to top off the evening’s entertainment, I shot this crappy video with my crappy digital camera of her playing with Buddy through the doggy door. I only got a few seconds of it and the lighting wasn’t good but she was having so much fun I couldn’t help but laugh right along with her.

My Son said they had a good time at the Cirque (whatever the heck that is) but I think I got the better value out of my entertainment dollars.