Because of the slightly barrel heavy aspect of the SKS, I have been of the opinion for quite some time that a vertical foregrip would be a useful addition. I’d been kicking this around for a while but just hadn’t stumbled across a foregrip that grabbed my interest…until a couple of weeks ago, when this one from AIM just reached out and whapped me upside the head. 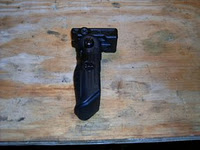 I like the idea of being able to fold it under out of the way when not in use. After e-mailing their staff to get measurements to make sure it would fit the way I wanted it to (many thanks to the AIM support staff for their prompt response), I ordered it.

The only problem was going to be mounting. The TAPCO T-6 stock does not have a rail on the bottom. The foregrip area is too thin to machine one into the tupperware so I had to come up with a rail that I could just bolt on. 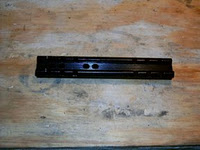 I found a weaver style metal scope mount at Dick’s Sporting goods that I though would work (with some slight modification)…and I was off. 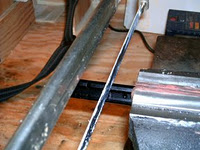 The mount that I bought was too long to fit under the flat portion of the Stock’s forearm area. I thought about using a shim to enable me to fit the whole mount on, but I decided that would look cheezy. I ended up cutting the mount down… 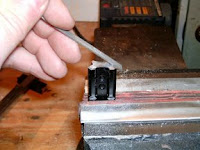 …squaring the newly cut edge with a file and then smoothing off sharp edges with a jeweler’s file.

After a touch of paint on the newly cut edge, I was ready to mount it to the stock. 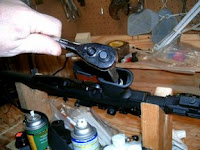 To remove the action from the stock, first the pistol grip comes off by un-bolting it from the inside. 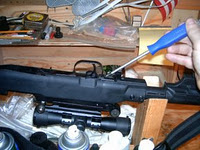 Then you can get to the mounting tab that holds the trigger housing group in place.

I always use a phillips screwdriver to push the tab in and release it. 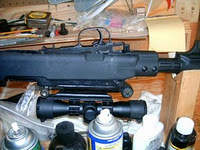 As soon as the trigger housing group is pulled free, the action is released from the stock. 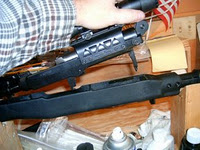 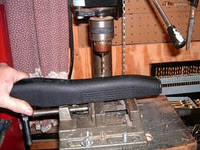 Then I drilled holes in the stock for the mounting bolts.

I’m not even going to go into my reasoning for deciding what length to cut the mount, where to place the mount on the stock etc, because it was basically just a matter of personal preferences and aesthetics. Pretty much anyone who does this would have to decide on their own.

I will say that there are reinforcing “ribs” spaced a few inches apart all along the inside of the forearm part of the stock. Make sure you position your mount holes so that the attaching nuts will clear those ribs. I actually drilled the holes close enough to the ribs so that they would be snug against the flats of the nuts to prevent them from turning. That reduces the chances that they will vibrate loose.

As a side note, the mount only came with short machine screws. This mount was designed with drilling and tapping the receiver in mind. I bought stainless steel screws and nuts at the local hardware store for attaching the mount to the stock. 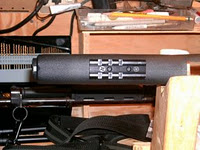 Of course, I painted the heads of the screws black for aesthetics’ sake. 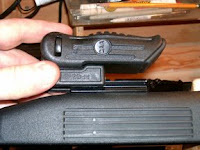 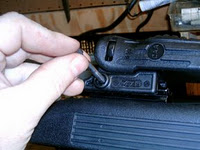 …and installing the securing cross-bolt. 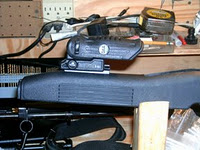 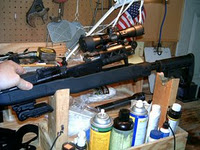 Slip the action back into the stock. 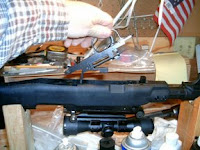 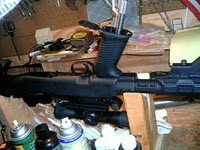 Bolt the pistol grip back into place. 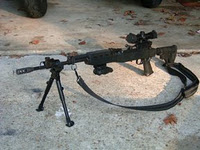 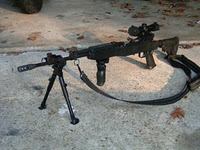 I didn’t think to stick a magazine in before taking the photos…it looks even better with the mag and the grip makes a world of difference when handling her in tight quarters.

Start to finish, this minor mod took less than an hour.

The only thing left that I’ve been contemplating is taking a few inches off the barrel to shorten her up a bit. I haven’t ruled that out yet, but I haven’t definitely decided to do it yet either. I would only be able to take off maybe three inches without having to machine either the barrel or front sight in order to move the sight back farther. I’m not sure that the effort would be worth the little bit of length advantage I’d realize.

I also have some concerns about whether shortening the barrel would reduce the gas pressure enough to make her start short cycling the action again.

I’ll have to think about it a little more…I’ve got too much time and energy into this project to risk turning it into a fancy single-shot.

1 thought on “Latest addition to the EBR”