In M1 Carbine Part 9, we reassembled the components removed from the stock and receiver.

Update: I was installing the sling backward. The installation procedure remains the same; however, reverse the ends. The buckle end goes through the oiler and the button snap end attaches to the front mount. This prevents you from having to use the blunt object method of flattening the button snap tab to get it to fit through the oiler slot. I plead ignorance and lack of intelligence. Sorry for the confusion.

—
This is the final installment of this series on the new old M1 Carbine. In this edition, we’re going to install and remove the standard GI web sling and sling oiler. 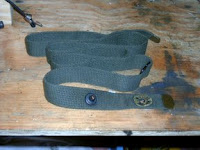 The sling I purchased for my M1 Carbine is new production, not an original WWII GI piece. For that reason, I was not shy about “making it work”. I don’t know how my new production sling stacks up as far as size and shape of the tabs and clips etc. It was a very tight fit and so I did have to “modify” it to make it fit slightly better. 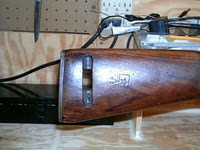 My stock is an “oval cut” versus “I cut”. I don’t believe that the sling and oiler installation would be any different, but I don’t know that for a a fact.

One side of the stock is cut with a slot for the oiler to fit into. 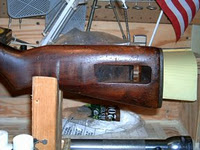 The other side has a “ramp” sling well cut into it. 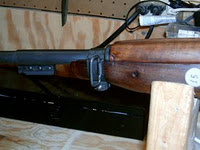 The front sling mount is a standard rectangular ring attached to the barrel band. 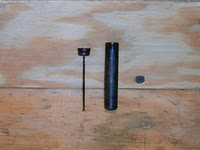 An integral part of the sling mount is a dual purpose item called the “oiler”.

I purchased an original WWII era GI oiler to go with my rifle. This is simply a tube for gun oil to be carried in with a metal needle dripper attached to the cap. 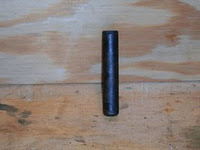 When the cap is installed, it forms a simple metal cylinder. 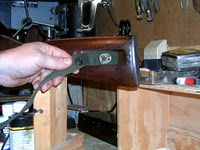 To attach the rear of the sling, the first step is to insert the sling end through the slot in the stock.

To ensure you put it through the right way, hold the sling flat against the “ramp” cut in the stock with the end toward the butt. The locking pin that protrudes from the sling mounting tab should be pointing out away from the stock. 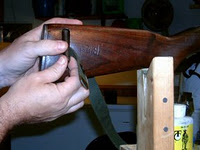 After the sling end has been passed through the slot in the stock, insert the oiler into the cut on side of the stock opposite the sling “ramp” cut. It may be a little tight but it will fit. 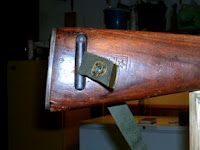 The wrap the sling end around the oiler and push the end back through the slot on the other….uh oh.

This is where I had issues. The mounting tab with the hole was too thick to pass through the slot in the stock after the oiler was installed. I tried some other methods of installation but no joy. 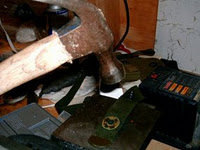 I ended up having to perform a highly technical and complicated “tab flattening” procedure.

I don’t know that I would have been so quick to pull out the old blunt instrument had this been a 60 year old WWII vintage sling, but with a cheap reproduction, I wasn’t overly concerned. After flattening the tab somewhat, I had to use a drill bit to ream the hole back out so that the locking pin would fit through it, but since then I have had no further problems with installing the sling. 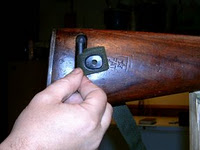 Picking up where I left off before the emergency surgery break…wrap the sling end around the oiler and stuff the tab end back through the slot in the stock. 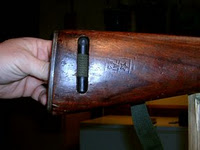 At that point, the oiler side should look something like this. 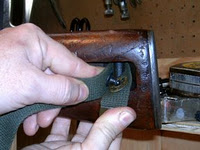 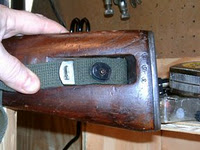 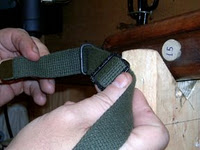 The front is a pretty self-explanatory. Make sure you insert the front end of the sling through the front sling ring so that the sling isn’t twisted. 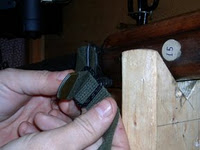 Basically stick it through and thread it through the buckle. Nothing to it. 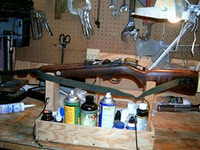 Use the buckle on the front end of the sling to adjust the length. 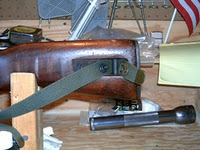 Removal is basically the opposite of installation. The only thing of note is when removing the rear of the sling from the oiler. 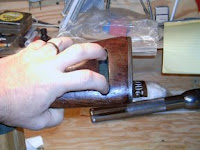 You may have to hold the oiler in place while pushing the loose end through the slot. 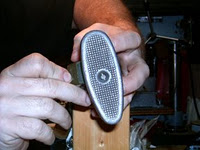 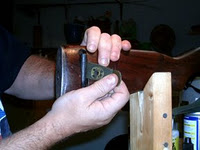 After pulling the end through the cut, remove the oiler, then pull the sling free of the stock.

That’s it. I hope you’ve gotten some useful information out of this series. If you have any questions, suggestions for topics that I may have missed or further information, feel free to comment or e-mail me using the contact me link in the sidebar.