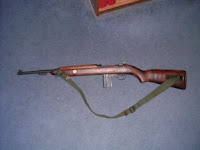 I was surfing some of the search results from hits in my log and stumbled across more information on the sling and oiler for the M1 Carbine. Although the mechanics of installation are pretty much the same, it seems I’ve been installing my sling backwards. The buckle end is supposed to go through the oiler and the snap end is supposed to attach to the front mount point. 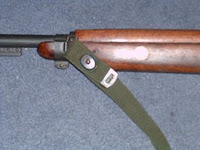 I honestly don’t remember why I started doing it the other way. I may have found a picture or reference that described putting it on the way I did, or it may simply have been an assumption.

Functionally, I don’t think it makes a bit of difference. The sling worked fine the way I was installing it.

There are two advantages to doing it the right way though: First, that explains why I had to smash the button tab on the end to get it to fit…it wasn’t supposed to fit. Why I didn’t think of that at the time is a bit beyond me. I guess I just got fixated on installing it the way I THOUGHT it was supposed to go and didn’t even try it the other way. I’ve been called a lot of things in my life, but “genius” has never been one of them. 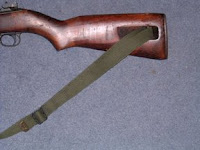 Second, this way is the way it is “supposed” to be installed so there is less chance that you’ll run across someone at the range who knows better and ridicules you for having it backward…or, worse yet, just thinks “what an idiot” and doesn’t bother to tell you.