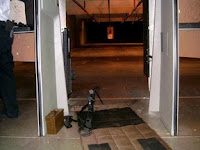 I finally had an opportunity to get to the indoor range and test out the M1 Carbine and SKS since my last escapades with them. The M1, I hadn’t really done anything to, but I had only fired 20 rounds through it so I wanted to shoot some more as well as zero it at 25 yards.

The SKS, I wanted to check operation with the bipod, forward grip and light installed. I wasn’t sure if the bipod or light, being newly attached to the tri-rail barrel mount, would cause any harmonics or other unusualness that might affect aim point or accuracy. I wanted to see what I could do off-hand with the vertical foregrip installed, and I wanted to make sure the light wasn’t going to crap out after the first shot.

First, the M1. I had only fired one box of ammo through it and had had three failures to fire in that 20 rounds. Not a good ratio. I cleaned the bolt again before this range trip and I brought more and different ammo this time. 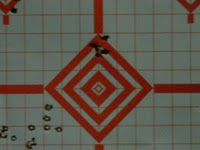 I started out with the sight centered in windage and on the lowest setting on the elevation ramp. She was shooting about 2 inches high and three inches right.

After dialing in the left windage and playing around for awhile, I shot this 5 shot group at the center diamond.

For reference, the squares are one inch.

Ignore the holes on the lower left, they were left overs from zeroing and playing around. From the prone position, with no rest, military iron sights, at 25 yards, four of the 5 holes are touching. The hole high and right was shot number 3 and a called flyer. I’d say she shoots purdy good for an old girl. 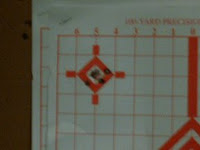 This is off-hand, standing. I held two inches under the center of the diamond and put 5 right on the money. That little rifle is easy to shoot. Once I get the FTF issues ironed out, I’m thinking this is going to become my primary home defense firearm. It is light, well balanced, handles very well and puts the holes right where I’m pointing it.

I’m not sure I can express this in words, but upon taking her out of the box after the visit from the BBTOJ and lifting her to my shoulder for the first time, my immediate thought was “man, this thing just feels good to point.” It just felt so natural going up to my shoulder. I knew that if she shot worth a darn, we were going to become very close friends.

I’ve just got to figure out why she gets stubborn sometimes. 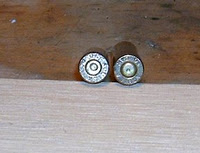 I finished off the four mags I had loaded for a total of 60 rounds. I “only” had one failure to fire while on the last mag. I thought about shooting some more and seeing if the FTFs continued, but it was getting towards closing time and I still had more shooting to do. From looking at the primers, (successfully fired on the left, FTF on the right) it looks like the FTF was caused by a light strike. The primer is barely dimpled. The trigger felt normal and I heard the hammer fall so I don’t think the problem is in the trigger group. The fact that I went from 3 FTFs out of 20 to 1 out of 60 is a vast improvement…maybe I still didn’t get the bolt clean or perhaps there is a burr or flaw on the firing pin or bolt that I didn’t notice. I’ll check the bolt again and see what I can see. I REALLY like this rifle and I REALLY hope I can get it ironed out.

Anyway, on to the SKS. First I wanted to check out the zeros. The tech sight seemed just fine. Right on the money at 25 yards.

The scope had drifted a little bit but I got it dialed right in. I will say that I’m not terribly satisfied with the scope. I’m not actually surprised about that considering the price I paid for it…and some of it may be because I still don’t have a cheek pad and I just don’t get a good cheek weld when using it. Something that just needs more work.

Anyway, the bipod worked extremely well. Very stable, no problems with accuracy (at least any more than usual), did what it was supposed to do. I can’t complain a bit. We’ll have to see how it holds up long term, but at this point I’d say well worth the $30 investment.

The light also came through with flying colors. I tried it turned on and off and had no problems. Granted, I only went through about 70 rounds so only time will tell how well it will hold up over sustained use, but at least it didn’t crap out after the first couple of shots. Also well worth the investment…all $8.00 of it. 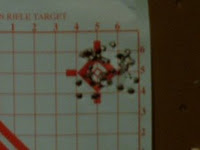 Finally, the vertical foregrip. The only issue I had with it was that, with the grip extended, it was just barely in the way and made it a little more difficult than usual to insert the 30 round mag. The shorter 20 round mags (which are my preferred mags anyway) were no problem. As far as stability…well, this target was shot standing, off hand using the foregrip and the Tech-sight/Williams Firesight iron sights. This was a full 30 round mag fired as fast as I could get away with (the range doesn’t allow “rapid fire” for more than a double tap…but you can still get away with firing pretty quickly as long as you don’t go crazy with it).

I was very happy with the improvement in handling. I can definitely keep it within minute-of-badguy even shooting quickly.

In a nutshell, I’m pleased with all of my additions and not in the least disappointed with any of them at this point. The only thing that really NEEDs improvement is to add a cheekpad and, if that doesn’t result in improvement, possibly a better scope.

Hopefully I’ll find the time to get out to the rifle range sometime before spring. I’m pretty eager to see what I can do with the carbine at 100 and 200 yards. I’ll keep you posted.