Update: Thanks to Ahab, Bruce at No Looking Backwards and Uncle for the links. Visitors are always welcome and be sure to check out my Big Announcement.

Someone linked to this story* which broke the earth shattering news that the Coalition to Stop Gun Ownership and the Educational Fund to Promote Gun Ignorance has published an anti-gun “report”.

What actually caught my attention was the last of four comments from astute reader AlanM:

OF COURSE NOT!!! Over 50 percent of vendors at any typical gun show are NOT selling firearms. They are selling holsters, books, magazines, parts, paper targets, jerky, hunting clothes, military insignia, leather goods, and who knows how many other things that are NOT guns.

I’d heard that contention before, and I’ve been to enough gun shows to know it to be true from personal experience, but I was curious as to what the anti-gunners base their obviously inaccurate “up to 50%” contention upon.

So, I went right to the source.

The much ballyhoo’d report said:

The ATF reports that 25% to 50% of firearm vendors at gun shows are unlicensed.2 [emphasis added]

So, let’s check out the cite. Here’s what we find in the Endnotes:

In other words, their own cite belies their contention; among the unlicensed 25 to 50% of gun show vendors are an undetermined number of vendors who do not sell firearms at all. Why even bother with a cite if it is only going to reveal the undeniable fact that you are lying? Because most people won’t bother to check out the source…they will see only that a cite was given, that the source was the ATF and assume that the information presented is accurate.

The bottom line is that these people are brazen, unrepentant, blatant liars. Period.

The second cite didn’t make it quite so easy; a “study” by Dr. Garen J. Wintemute of the University of California-Davis concluded that as many as 70% of firearms dealers are “not readily identifiable as licensed dealers”. This of course, leaves the impression that those 70% are NOT licensed dealers which, of course, is BS. 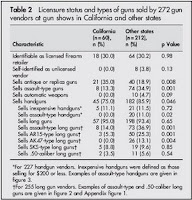 There are many obvious problems with the “study” but that is beyond the scope of this post. Limiting the subject to the contention that the majority of gun dealers at gun shows are not licensed, the “evidence” boils down to the data in this table (click to make bigger).

What immediately jumped out at me was that, although the entire premise of the “study” was that California’s highly regulated gun shows are MUCH better than those in more liberty conscious states, and although private sales between unlicensed individuals are not allowed in California, the percentage of dealers that were “readily identifiable as licensed dealers” was almost exactly the same for California as in other states (30% and 30.2% respectively).

If it is reasonable to assume that vendors “not readily identifiable as licensed” that attended gun shows in states other than California were, in fact, not licensed, then why is it not reasonable to make the same assumptions about California? And if we make the same assumptions about California, where unregulated sales between private individuals is illegal…doesn’t this demonstrate only that “closing the gun show loophole” is ineffective?

Of course, that is not what this “study” demonstrates at all. In fact, because it is not based upon verifiable, factual data and only upon obviously agenda driven supposition and assumption, it demonstrates exactly nothing.

In summary, the claim that the majority of “dealers” at gun shows are not licensed simply is not supported by the evidence…not even by the evidence they themselves cite. This is nothing more than misdirection and propaganda designed to sway the uninformed. Again, we demonstrate that the anti-gun agenda is not supported by fact or reason and, so, its proponents must resort to misrepresentation, faux “studies”, misleading terminology and flat out lies in an effort to advance their cause.

*I can’t remember who posted the link to the original story and I’m too lazy to go back through the hundreds of postings I read yesterday to find it. If you posted the link, please leave a comment and I’ll give you credit.