I know, I know…I should have saved the money for my new computer.

Well, I thought about that, but I have a valid need for another pistol. For those of you who have generously donated to my computer fund, rest assured that your donation is still set aside for that need.

Here’s the story. I’m more of a rifle guy than a pistol guy. I do believe in self defense and in having adequate tools for that task…but my pistol is exactly that: a tool. My “enjoyment” shooting revolves around rifles. Probably because I started shooting rifles at such a young age…I’m more comfortable with a rifle, shoot better with one and just enjoy it more.

My chosen carry pistol is a full sized .45 acpAutomatic Colt Pistol - Denotes one of s... More Ruger KP-97. I am very comfortable with it, it is utterly reliable, more accurate than I can shoot, and well suited to the curse of left-handedness. The problem is that it’s not exactly easily concealable while wearing summer weight clothing. This is not normally a concern of mine because I’m very comfortable open carrying and do so on a regular basis.

There are times, however, when open carrying is not practical. There is one particular venue that I regularly patronize where that is the case. The proprietors of the establishment know that I carry and, in fact, encourage me to do so, but they fear that some of the patrons may not understand and may take umbrage over it. Therefore, they have asked me to be discreet when patronizing the establishment. Although I don’t necessarily agree with the policy, I respect their right to set it. They do respect my right to self-defense, they have only requested that I be discreet. I find it difficult to condemn them for that.

At any rate, because my current defensive arm is too large to conceal effectively under light clothing, I needed a more suitable tool for the job during the rapidly approaching summer.

Budget constraints are very important at this time so I needed something inexpensive…but I wanted something of proven dependability, something ergonomically suited for a southpaw, and something not too diminutive in caliberThe bullet or Bore diameter of the gun -... More. 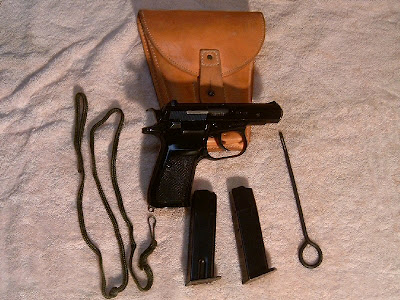 After some research and reasoning, I decided on the Ceska Zbrojovka vz. 82 (commonly called the CZ-82) . It was fairly recently added to the ATF Curio and Relic list so I could purchase one from an online retailer for a very reasonable price under my C&R FFL.

The vz. 82 replaced the Tokarev vz. 52 for the Czech military in 1982 and was standard issue for the Czech Police into the ’90s. It is chambered in 9mm Makarov (9x18mm) and has a respectable magazine capacity of 12 rounds. It features a fixed barrel, blowback action, DA/SA operation and (surprisingly for a military arm) ambidextrous controls.

Now that I knew what I wanted, I only had to figure out the “how”. In addition to my normal monthly savings and my computer fund, I cut back a little more on “frivolous” spending (I could stand to miss a few lunches anyway) and started putting $25 a payday in savings. That’s only $50 a month, but patience is a virtue, right?

Well, a couple of weeks ago, I finally got all of the documentation I needed to finish our taxes and we got a little more back this year than I was anticipating. My wife and I split the “extra” so I had about $150 to play with from that. Added to the $150 I had already saved toward the pistol and I was in there.

I purchased it from AIM Surplus who had the best offer going: The pistol with two magazines and other accessories for $209.95. I added two boxes of Wolf ammo and with shipping, the total came to just under $250 (which even leaves me $100 to put in my computer fund…so there!)

I have to give Kudos to AIM for their service. I called and ordered it on Wednesday morning. I got the UPS shipping notification Wednesday afternoon and had it in my hot little hands by 7:00pm Thursday. Now THAT’S how it’s supposed to be done.

I did have to wait a couple of days for the ammo which had to be shipped separately via ground, but I didn’t get the chance to go to the range until yesterday anyway, so that worked out all right.

This post is already long enough so I’ll leave it at that for now; but don’t worry, there’s more about my new little Czechoslovakian friend to come.

2 thoughts on “Latest Addition to the gun safe”