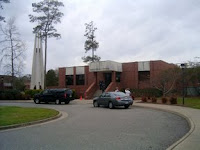 held a “town hall” meeting in the Boyd dining center at the Virginia Wesleyan University in Norfolk this evening.

I didn’t take my video recorder because I wasn’t sure there would be anyone else there to record while I asked my question…I needn’t have worried, there were plenty of gun rights supporters there to back me up. At any rate, I did record audio. 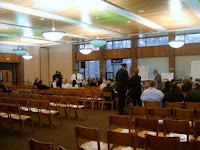 I got there early and there weren’t many people there yet. Ultimately, the showing wasn’t too bad…maybe 100 people.

Although there was no organized VCDL effort to get people there, in addition to me, there were at least 6 overt gun rights supporters there and I saw quite a few heads nodding and supportive looks in the crowd that I assume were on our side, even if that wasn’t the specific issue they attended in order to see addressed. 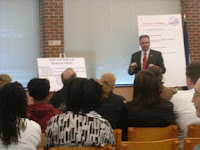 The question revolves around an issue that I blogged about last week. Here’s what I had jotted down to ask him:

Governor Kaine: During this session, you vetoed SB 476 which would have allowed licensed Concealed Handgun Permit holders to discreetly carry their defensive arms in restaurants, provided that they don’t drink. As justification for that veto, you stated that “guns and alcohol don’t mix.”

Yet you signed into law SB 776 which allows Commonwealth Attorneys and their assistants to carry concealed handguns into those same restaurants with no requirements for training, licensing and with no prohibition against drinking.

How do you justify that apparent hypocrisy?

Well, I never got to ask it because another gun rights supporter beat me to the punch. I couldn’t find the questioner after the meeting because he was on the other side of the room from me and he somehow disappeared before I tracked him down to get his name. If he stumbles across this account I hope he will identify himself in the comments. Well done sir.

Update: The most recent VCDL alert (which kindly linked here…thanks Phillip) revealed the identity of the mystery questioner: VCDL member Bruce Fiinkelstein. Thanks brother, you did an excellent job of presenting the question. [/Update]

At any rate, Governor Kaine’s response?

I explain it by saying you got the bills wrong. Your first statement of my veto was 100% accurate. Virginia does not allow concealed weapons to be carried into restaurants except by sworn law enforcement officers…

Well, you know, I have a lot of lawyers and we spent a lot of time on this…

While Commonwealth Attorneys can carry concealed weapons because of the bill I signed, they can’t take them into restaurants that serve alcohol.

Update: Someone videotaped the first question and response. Here’s your link courtesy of VCDL. [/Update]

I wonder what the bill actually says.

Let’s find out, shall we?

It seems that he was…um…almost right.

However, above that, in paragraph B…Houston, we have a problem:

B. This section shall not apply to any person while in his own place of abode or the curtilage thereof.

Except as provided in subsection J1, this section shall not apply to: [emphasis added]

Therefore, unless there is some new mechanism of the English language or the Virginia legal use thereof of which I’m unaware: Governor Kaine is incapable of comprehending the law and apparently he is is due a refund for the billable hours involved in the “lot of time” that his “lot of lawyers” spent on this issue…he got ripped off.

Back to the meeting:

A little later on, another fellow gun rights supporter (and fellow VCDL member…and fellow Navy vet), Al McClean, who happened to be sitting right behind me, was called upon.

Mr. McClean actually read the problematic text from the bill in question and re-iterated that it would allow Commonwealth Attorneys to carry concealed in restaurants. Governor Kaine stuck to his (erroneous) guns (pun most definitely intended).

He insisted that the Attorney General and his Public Safety Secretary have ASSURED him that this law doesn’t mean what it says. Then he dismissed the argument by saying “I’m not going to debate the wording with you…”

How DARE we question him about it…

Mr. McClean went on to ask why, if he can be trusted to carry openly, he cannot be trusted to carry concealed in a safe manner. Governor Kaine went back to the “I’m too stupid to understand these issues so I just do what the State Police tells me to do” argument.

OK. That’s not EXACTLY what he said.

But I think I captured the spirit of his rationalization excuse reasoning.

Finally, another VCDL member asked the final gun related question. I did not get this person’s name either (like an idiot…I was sitting right next to him, but he left shortly after asking his question and I didn’t think about it until he was gone…if you happen across my humble blog, please let us know who you are in comments).

Basically, he asked why other states that recognize Virginia’s permits allow him to carry concealed in restaurants, but his home state, the state that issued his permit, does not. I thought it was an excellent point, but Governor Kaine retreated to the “if your friends jumped off a cliff would you follow them” argument used by parents and authoritarians everywhere. The gist of his response was “I can’t control what other Governors do.”

Audio Here (same caveats as above)

Had he called on me, I would have followed up with something like:

“When the State Police advised you to deny the will of the people by vetoing SB 476, which was passed by the people’s representatives by a wide margin, what evidence did they cite in support of their recommendation to veto? Which of the many states that currently allow concealed carry in bars and restaurants have experienced problems with this policy? And finally, what provision of the Virginia Constitution empowers an un-elected representative of the State Police to arbitrarily over-ride the will of the people?”

Unfortunately, by this time, he was beginning to get leery of calling on anyone else in our general area so he moved on to another section of the room.

Shame. I’m thinking the “answer” to that one would have been…um…interesting.

At any rate, it was an entertaining evening and we Virginians can take heart in the fact that neither our Harvard Law School graduate Governor, nor the Attorney General, nor the Public Safety Secretary are capable of comprehending some fairly straightforward language in the statutes that the Governor signs.

That’s a relief. I was afraid that they may have been lying about it.