This is going to end up being another series of posts similar to my SKS series or M1 Carbine series.

Once I’ve gotten the entire series posted, I’ll probably offer a CD of those posts for donors to the computer fund like I do for the SKS and M1 Carbine posts.

The first post of the series should actually be the range report and field stripping instructions that can be found here.

In this edition of ‘smithing the CZ-82, we’re going to briefly discuss the loose grips problem and then disassemble the slide.

In the original range report post linked above, I related how the grips seem to slip when firing which detracts from accuracy and makes the whole gun feel “cheap”. In comments, Phil mentioned that over tightening the grip screws can cause the grips to crack and become loose. Tom suggested using metal or plastic to shim the grips to tighten them back up again and Clint had already mentioned Marschalgrips.com which is a grip maker in Hungary that makes wood replacement grips for several pistols, including the CZ-82/83. 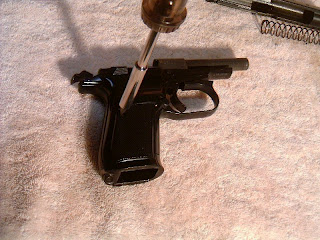 I tried the shim trick first. I removed the grips. 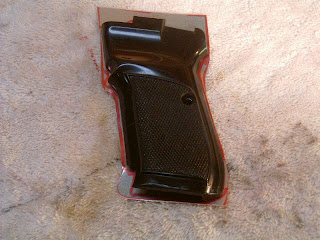 Then I traced their outlines on a piece of thin aluminum I had lying around. 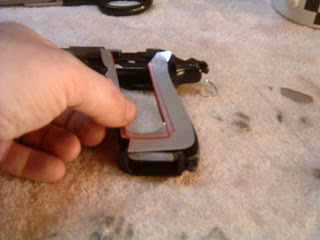 At first I tried to make it cover the entire outline of the grips, but it didn’t take long to figure out that it would interfere with the controls and/or magazine. 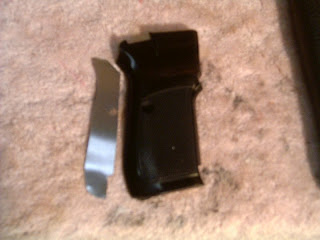 After cutting the top and bottom, the front strip was too small to try to keep it in place under the grip so I settled on a shim that ran up the back of the grip with a hole for the mount screw.

I won’t say that it didn’t work, but I wasn’t satisfied. It did tighten the grip up a little, but it still had some movement. Granted, I didn’t epoxy the shim in place, so it may have been better had I done that…and a thicker piece of aluminum or plastic may have worked better so I wouldn’t rule this technique out completely, but I wasn’t happy with the results. I already had a line on wood replacement grips and I’m not overly fond of the cheap plastic anyway so I ordered a set of Marschal grips and dispensed with the idea of making the old plastic ones work.

With the grip issue put aside for the moment, on to the next item: disassembling the slide.

Completely disassembling it shouldn’t be necessary unless something breaks, but I wanted to clean it good and I wanted to at least break the rear sight loose since it needed adjustment anyway. 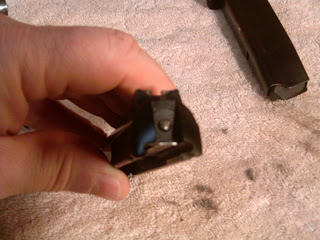 First, the firing pin is easy to remove.

You simply press in on the spring loaded firing pin with a punch or even your finger. 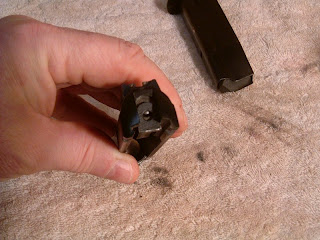 Then slide the retainer up. 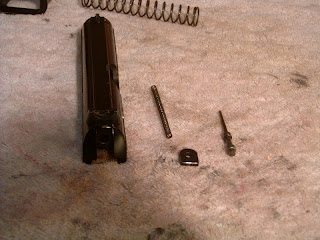 Then pull the firing pin and spring out. That’s all there is to it. 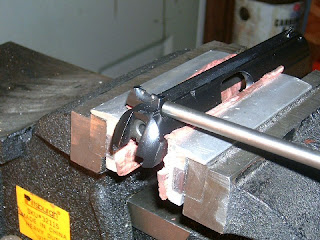 Next I drifted off the rear sight. It wasn’t too difficult even though it was staked in place. I put the slide in my padded vise jaws because it kept trying to roll around otherwise.

I was going to remove the front sight also, but I broke the pin punch that I needed for it and haven’t gotten a new one yet.

There is really no good reason to remove the front sight unless you’re replacing it, but it’s held in by a single small pin. 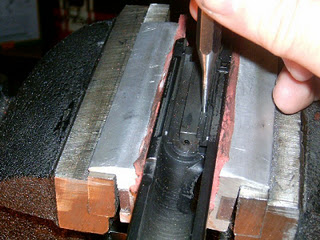 Finally, the extractor and spring. They are held in by a pin that runs from top to bottom through the slide.

Clamping the slide in the vise this time served a dual purpose: the obvious one of holding the slide in place while driving out he pin, but also the vise held the extractor in place so it and its spring wouldn’t shoot out after the pin came out.

I drove the pin out from the bottom. 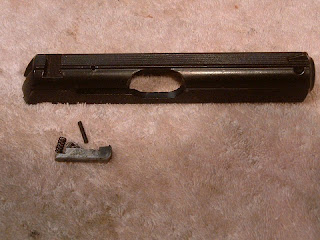 And then carefully removed the slide from the vise, catching the extractor and spring in the process.