Welcome to the latest edition of CZ-82 Gunsmithing.

In the first post of the series, we Introduced the CZ-82 to our collection and identified the areas that needed work.
In CZ-82 Gunsmithing Part 1, we discussed the loose grips issue and disassembled the slide components.

In this edition of CZ-82 Gunsmithing, we’re going to disassemble the magazine catch and lighten the catch spring tension.

Of course, I’m starting this project with the pistol already field stripped and the grip panels already removed. If you are starting with a fully assembled pistol, be sure to remove the magazine and verify that the chamber is empty before beginning. 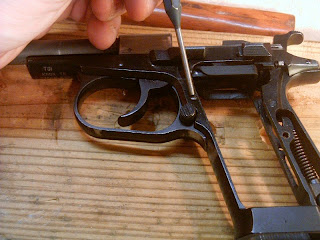 The first step is to remove the trigger guard. That’s simply a matter of removing one pin. 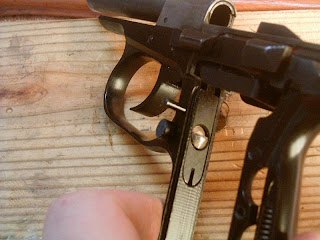 Many of the pins in the CZ-82 are not tight. Other components hold them in so they don’t need to be. That makes disassembly much easier than some pistols.

I did have to tap the trigger guard pin a little to get it moving, but once it broke loose, it came right out. 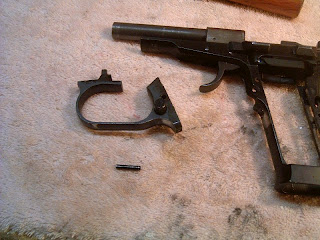 Once the pin’s removed, you may have to do a little jiggling and aligning to get the trigger guard to pull out, but it shouldn’t take any appreciable force. It’s just a matter of getting it freed from the trigger guard pin in the frame and angling it right to get it to come out. 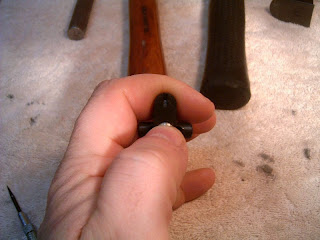 Once the trigger guard is out, disassembling the magazine catch only involves one pin as well. 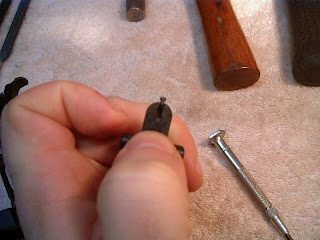 The pin that holds the mag catch in has a lip on it. Pressing in on the mag catch releases tension and then a pick or jeweler’s screwdriver can be used to pry the pin out. 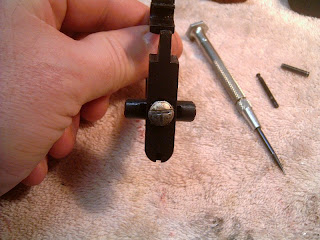 Once the pin is out, the mag catch pulls out of the face of the trigger guard. 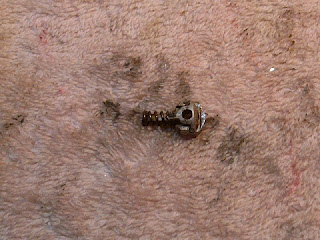 The small T-shaped part on the top acts as a lever. When the mag release button is pushed in either direction, it moves the bottom of the “T” to the side which tilts the lever. One of the top arms of the “T” presses down on a ledge on the catch itself and pushes the catch back, overcoming the spring pressure and releasing the magazine. Very simple, but effective. 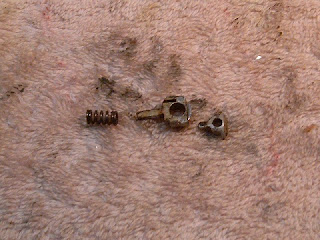 The pin, of course, acts as the pivot point for the lever, and holds the whole thing together.

Here’s a view of the catch parts taken apart. 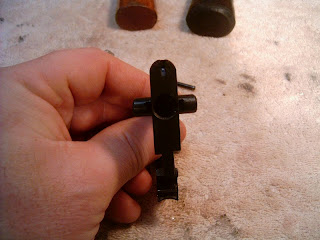 The magazine catch button is then just pulled out the side of the trigger guard. 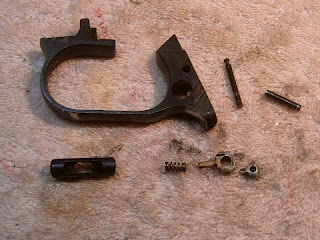 I didn’t take any super-duper closeups of the button cylinder itself, but there is a notch on the top that catches the bottom of the “T” shaped lever in the catch. That’s what tilts the lever when the button is pushed. The edges of that notch seem to get a lot of wear and tear. If you’re having problems with the mag catch not releasing in one direction, feeling “grabby” or hanging up, I’d check the edges of that notch and smooth them out a bit if needed. If they get too bad, I could see the release button having to be replaced so don’t take any more metal off than you absolutely have to. The top arms of the “T” piece, or the ledges on the catch could also be problem areas.

Since the mag catch is so simply designed, lightening the spring was simple. Many people lighten springs by cutting off a coil or two and that is a possibility, but it changes the overall length of the spring. In this case, I don’t think it would be a good idea because the spring’s so short already, shortening it more could adversely affect operation. 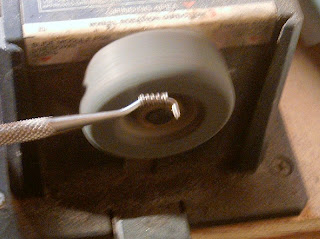 In my humble opinion, a better way to lighten spring tension is to make the spring coils themselves thinner, and, therefore, not as strong. How do we do that? Easy…with a bench grinder or belt sander.

Sorry for the blurry picture. I’m sticking with the crappy camera excuse. I try to take multiple shots of each thing so at least one might come out good, but I still sometimes fail to get a decent one and the monitor on my camera is so small, I can’t tell it’s out of focus until I pull it off the camera and look at in on the computer at full size…which is usually too late to re-stage the shot.

My grinder is a “mini” grinder and the stone is fairly fine. If you use a full sized bench grinder or a belt sander, be very careful not to take too much metal off too quickly.

I used a dental pick to hold the spring. Use something that will keep the spring from flying off if you happen to lose control of it for a second, but small enough that the spring can spin on it.

You want the spring to spin freely as you’re grinding so that it stays even all the way around.

This spring was VERY tight so I had to take quite a bit off to get it to where I wanted it. Be patient, go slowly and put things back together and test it often. You don’t want to go too far and weaken the spring to the point that the mags won’t stay in when inserted. 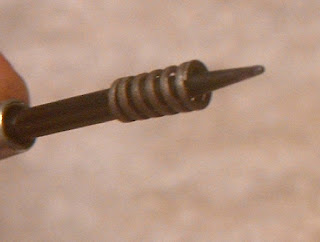 I ended up taking almost half the width off the coil metal to get it to the right tension.

But now that I’ve got it down to where I want it…it’s just about perfect.

Still nice and tight and holds the mags firmly, but releases easily with one finger when the button is pressed.

Reassembly is pretty much the reverse of assembly. I’m going to do this series just like I did the M1 Carbine series. I’m going to do all the disassembly and maintenance posts, then start with it completely disassembled and do all the reassembly posts, ending with fitting and installing the new grips and the range test, so if you’re looking for the reassembly instructions, be patient. I’ll get them posted as quickly as I can in my “spare” time.

I hope you enjoyed and got something out of this edition of CZ-82 ‘smithing. We’ll be back in a flash with the next exciting episode: Removing the Safety. Same Bat Time…Same Bat Channel.