I finally got around to shooting Mr. Completely’s first e-postal match of the year.

I’ve always maintained that I’m a much better rifleman than pistoleer. I think I adequately demonstrated my need for practice in handgunning with this match.

I wasn’t going to shoot it because I have just had too many projects going on and hadn’t gotten to the range lately, however, I just made another handgun purchase (I know, I know…I should be using that money for my computer…quit nagging me) and that prompted me to go try it out and, in the process, shoot Mr. Completely’s match.

The only handguns I had ready to use were the new one and old faithful, my Ruger P-97 daily carry gun. The CZ is about 80% disassembled on my bench, I’m doing some of the work to it that I discussed in my original post about it…much more to come about that. I’m down to only about a dozen balls for the black powder pistol and my hookup who was supposed to be bringing me some lead wheel weights hasn’t come through. I may just have to order some lead from Midway USA.

Anyway, the new one is a target/practice pistol. I picked up a brand new in the box Smith and Wesson 22A-1 .22lrLong Rifle - One of several categories o... More at the gun show yesterday. I’ll post all the details later, this is supposed to be about the e-postal match, so, without further ado: 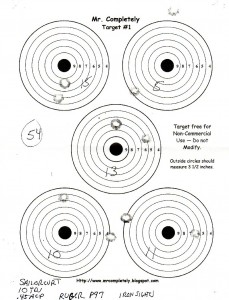 Yes, I suck. I’m confident I can hit a badguy from anywhere up to about 25 yards, but pinpoint accuracy I do not possess. 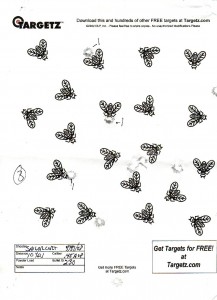 On the flies target, I actually hit the one I was aiming for once. The other two were pure luck. Oh well. Slop counts in this game.

You’ll notice that I was a bit liberal with one of the flies. It could have gone either way, but I did so poorly on this target that I gave myself the benefit of the doubt. 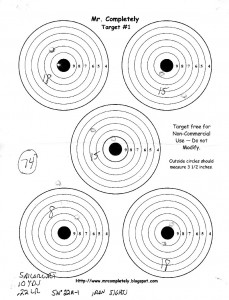 Next, also 10 yards, the S&W 22A, iron sights, this one was with Federal Premium Gold Medal Match, standard velocity, 40 gr solid lead.

I did a little better with the .22 on the bullseye target, which actually surprised me since this is a brand new gun. I’m going to do an official range report on it later on but I will say at this point that I was pleasantly surprised with the trigger. Distinct two stage operation with minimal takeup, no creep and a nice clean break that I’d estimate at around 4 or 5 lbs. Very shootable. 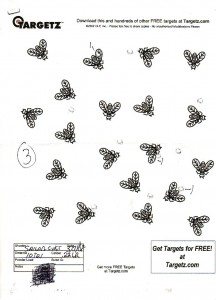 I did just as poorly on the flies target as with the .45, but I will say that I was much more consistently hitting where I was aiming with the .22. I think I may have been flinching just the slightest bit with the .45. Something to work on, obviously.

I gave myself the benefit of the doubt on one of these too.

The annoying thing is that I shot the pair of targets three times with three different types of ammo (I was experimenting to see what it likes the best).

My best flies target (I hit 5) happened to be paired with my worst bullseye target (a 67).

If I could have mixed and matched, I could have had a respectable score. As it was though, I did the best I could and shot up all the targets I took with me.