I’m still feverishly working on setting my new computer up, transferring files (the 160Gb hard drive seems to be physically unharmed and still works fine, it was just the file system that was corrupted) and learning the new system; however, I took a break from that yesterday to take advantage of a rare opportunity to spend some time with my son…what better way than to take him to the range that I recently joined, Airfield Shooting Club. 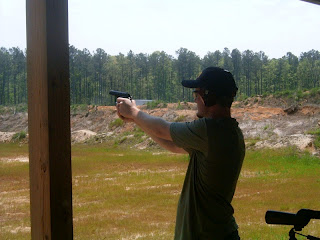 We were supposed to have a friend of his along who’s never shot before so I was looking forward to a “new shooter” report…alas, the friend got called in to work so he didn’t get to come, but my son and I still had a good morning of shooting…and this is still a “new shooter” report of sorts. 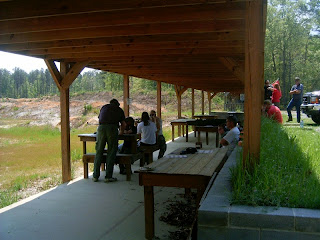 I knew that the boy scouts were supposed to be doing a merit badge shoot but I didn’t think they’d be there until afternoon. They were actually there when we got there doing their safety brief and we shared the range with them the whole day.

They were under the capable instruction of an NRA instructor and club member who was also acting as RSO. They were shooting .22 rifles at 50 feet at reduced size targets.

They ooh’d and aah’d over the collection of rifles I brought, and then when we moved down where they were to shoot pistols at shorter distances, they were very interested and curious about all the boomsticks my son and I had brought with us. I don’t have a huge collection and I even left a couple at home, but we had four rifles and three pistols there for the two of us. 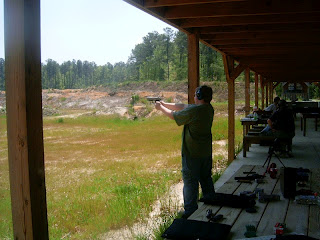 One of the scout’s parents was there and asked if his son could shoot my .45. Since his father was right there I had no problem with it and, although I stood close by his shoulder in case he had any issues, I needn’t have worried…he obvously had been well trained in gun safety and handling and shot very will with the big pistol.

My son has been trying to decide what type of pistol to buy for himself when he gets is Concealed Handgun Permit. He recently passed the class so all he needs to do is fill out the application, pay the fee and wait for the background investigation to be done. Anyway, he fell in love with the CZ while we were there. I didn’t even get a chance to shoot it because he hogged it the whole time (with my permission, of course…I can shoot it whenever I want). Anyway, he’s seriously considering that or a CZ-83 (which is virtually identical) for a carry pistol now.

Anyway, we had a great time and, although I wasn’t directly involved, we got to witness some young ‘uns introduced to the world of the shooting sports. A good day all around.

Oh…did I mention it was almost 90 degrees here yesterday? Today the high was 66. Don’t like the weather here? Wait a few minutes, it’ll change.

Cross posted on The Sentinel