This morning, Marko posted about his pack of attack Dachshunds and asked:

What kind of Non-Human Animal Companion has chosen you for an owner? Why did you settle on that species? And if you have a multi-species household, how do they get along? 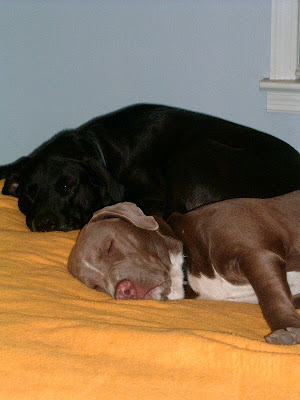 We are a multi species home, but we don’t have issues with them getting along because the dogs can’t get into the tank.

The dogs are both pound puppies and I’ve posted about them before but it’s been awhile.

The black little girl is Roxy. She’s a 2 1/2 year old lab/pit bull mix and is as energetic as an 85lb Chihuahua.

The little pink nosed boy, Buddy, is our cuddler. He’s a pure blooded mutt. We were told when we adopted him that he’s got Boxer, Pit bull, Lab and Dalmation in him…which to me spells mutt. At just over a year old, he’s much more mellow than his big sister. He’s a bit shorter both in length and at the shoulder, but he weighs just as much because he’s a stocky boy. He loves to climb up on my lap while I’m watching TV.

My wife and I have a “love seat” recliner that we sit in to watch TV. Roxy can be a bit jealous sometimes, so when he climbs up onto my lap, she’ll often climb up there too and lay in between my wife and I. It gets a little crowded up there with all four of us (and I’m always afraid we’ll exceed the max gross weight limit of the love seat) but we’re just one big happy family. 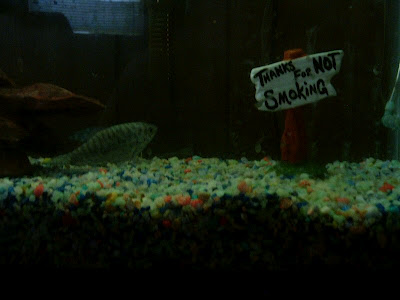 Oh…the other species is fish.

Sorry for the dark picture, but the flash just kept reflecting off the glass.

I’ve had a small fresh water fish tank for a long time. I usually just have a few varieties of tetras and whatnot. Right now, I’ve only got a single tenant. The tetras all slowly died off and I never replaced them so my Dwarf Gourami, George, has had the tank to himself for the past year or so (actually, I think he’s a she based on his coloring, but I didn’t know the difference when I got him. She’s never expressed any angst over having a male name or being referred to as “he” so I don’t worry about the distinction too much).

He seems to do fine by himself and he’s actually the biggest dwarf Gourami I’ve ever had at about 4 inches from stem to stern. He’s quite old for the species at about 5 years of age. I doubt that he’ll live much longer at which time I’ll have to decide whether to repopulate the tank or just retire it.

As far as why we chose…I’m not a cat person although I’ve cared for a couple over the years. I require certain specifications in cats: They must be capable of going outside without getting lost, stuck in a tree or mauled by other animals, they must not require a litter box (they can go outside just like any other self-respecting animal) and they MUST NOT scratch the furniture, walls, cabinetry, doors etc etc etc.

That’s a hard bill to fill so feline tenants have been few and far between.

My wife is a major dog lover and I’m pretty partial to them myself so dogs it is.

Marko mentioned that he thinks abusing pets is “in some ways worse than abusing another human”. I would agree completely. I place animal abuse (and I mean actually abusing animals, not hunting or slaughtering livestock) in the same category as child abuse. Young children and pets are very similar in many ways. They are both doggedly (pardon the pun) loyal to you, no matter how badly you treat them; they both love their parents/owners unconditionally and they both are almost completely dependent upon those parents/owners for their survival and well being. Abusing a child or animal that is so dependent upon you is the ultimate betrayal and is, in my mind, inexcusable.

I also think that pets serve an important function in the development of children. They teach valuable lessons on responsibility and life in general. Many children learn what it means to be depended upon by being entrusted with the care of a pet. Many children learn the value of caring for others by caring for a pet. Many children’s first exposure to the finality and reality of death is when they bury their first pet. We can try our best to TELL our kids about life and how to live it, but there simply is no teacher like experience.