I didn’t read anywhere that it was an empty .223 shell casing, but a .223 cartridge (unfired?). Also, could the hole in the wall have also been made by Ryan’s family and plugged by them, then lied about, to try to slant the court of public opinion in his favor? There is a lot of information not being put out by the prosecution because they do not want this case tried in the media (from a detective that was there…not me).

Let’s not be so quick to slam the police when ALL of the facts haven’t come to light. 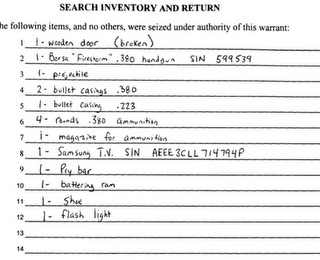 Here’s a screenshot of the items seized under the search warrant issued following the initial botched raid:

A PDF of both the initial search warrant and the one issued after Officer Shiver’s death can be found here.

Note Item number 5: “1 – bullet casing .223”. Comparing this with Items 3, 4 and 6 indicates to me that they were differentiating between empty shell casings (“bullet casings”), bullets (“projectiles”), and live cartridges (“ammunition”). This clearly means that the .223 casing was an empty cartridge case, not a round of unfired ammunition.

I noticed that the first time I saw the search warrant and would not have been quite so quick to take the word of the defendant’s lawyer and his family if there hadn’t already been some evidence that a shot was fired.

I could be wrong, but I have serious doubts about whether the family would have even had access to the house during the investigation. The “before and after” patched and unpatched photos of the hole were supposedly taken by professional investigators hired by the lawyer. Added to all the other strange things about this case, and I’m inclined to give the credibility edge to the lawyer.

1. The search warrant was issued solely on the word of a confidential informant. No controlled buys were made, no surveillance beyond a couple of “drive bys” was conducted and no other evidence was compiled.

2. The initial search warrant was apparently obtained under false pretenses. The officer that obtained the warrant made a sworn statement that the Confidential informant had been used in the past and was known to be reliable, but according to other reports, the informant had only recently come under the notice of the Police department and this was the first “tip” that he gave them.

3. The confidential informant was reportedly a criminal himself, was personally involved with Mr. Frederick’s family and had a grudge against Mr. Frederick.

4. It appears as though the Police were well aware that the confidential informant had broken into Mr. Frederick’s home three days before the raid and it is beginning to look like the break-in occurred, at best, with the foreknowledge of the Chesapeake Police Department and, at worst, under their direction as a routine occurrence.

5. Neighbors report seeing only two officers outside Mr. Frederick’s home at the time of the initial assault and only after Detective Shivers was shot did more officers arrive. They do not report hearing the police announce before attempting the break-in. The Police, on the other hand, testified that there were “two teams” of several officers involved in serving the initial warrant.

6. According to Police testimony during the Grand Jury hearing, the police announced, but began breaking the door down as soon as they noted movement from within the house. They never intended to give Mr. Frederick the opportunity to respond to the announcement and be served with the search warrant.

I think there are a couple of other aspects that I may be missing right now, but the bottom line is that this does not look good for the Chesapeake Police Department.

Even if it isn’t as bad as it appears on its face, this case reeks of a police department and city government that made a terrible mistake. Their mistake and poor policy resulted in the death of an Officer; now that Police Department and city government are merrily engaged in denying and covering up their own mistake in a desperate bid for vengeance rather than justice.

If more information comes out later that proves me wrong, I’ll happily eat crow. I do not want to believe that our Police Departments and judicial system could be this corrupt, manipulative and vengeful.