I actually did this one a few years ago as an e-postal Rifle match.

Basically, this is a variation of the dart game “Cricket.” 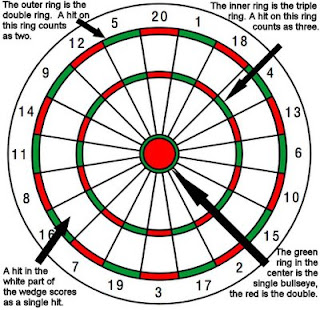 click picture to make bigger…picture provided for reference only, for the actual target, click the link above.

The idea is to hit three of each number from 15 to 20 and three “bullseyes” in the fewest number of shots.

For those completely unfamiliar with a dart board: the scoring area for each number is the “wedge” associated with each number.

The white spaces in between the double and triple rings and the triple ring and bullseye are the single area. Any hit in the white areas of the wedges counts as one hit for that number.

The bullseye doesn’t have a triple ring. The outer green ring (very thin on this target) is the single and the red central circle is the double.

A perfect score would be to hit the triple for each number from 15 to 20 and then two double bullseyes (or a double and a single). This would require 8 shots to complete.

CLARIFICATION: The numbers do NOT need to be shot in any particular order, nor do all three hits on any number need to be consecutive. Slop counts.

Any shot that touches a black line counts for the highest possible score. In other words, if you have a shot that is in the white wedge for a number, but touches the black line that outlines the triple ring, it counts as a triple.

The tough part is tie breakers. This gets complicated, so if you don’t want your head to hurt, don’t bother with it…just send me your completed targets and let me worry about it.

If there are still ties after that, we’ll just settle for a tie…or I’ll make up more rules as I go along…either way…

This match is to be shot off-hand (no rests allowed), any grip or stance, one or two hands allowed, from 10 yards or as close to it as you can get at your range.

I’m not going to establish any rifle classes for now, but if anyone shoots it, I’ll post the scores. Standard classes will apply (iron sights, optics, rimfire, etc). If you shoot it with a rifle, 50 yards is the distance and any position is allowed but no benchrests. This is VERY challenging with a rifle with no optics. I doubt that I’d even be able to see it at 50 yards. I’d just be shooting at spots on the paper and hoping.

At any rate, the pistol classes are:

As usual, one shooter can enter as many guns as they want, and one gun can be used by as many shooters as they want, you can try it as many times as you like to get your best target, but please only submit one target per shooter/gun combo.

I prefer entries to include a scan/photo of the target, but if you flat out can’t do that, please list the total number of shots and then how many singles, doubles and triples you hit for each number.