The bloggers are here. I was privileged to have the opportunity to go to dinner with a few of them last night.

My pastor was kind enough to allow us the use of one of the church vans so I started out by riding the scoot to the [shameless plug] Virginia Beach First Church of the Nazarene [/shameless plug] and picking up the van. Then I headed to the Airport Hampton Inn and picked up Caleb and Robb who had arrived earlier in the afternoon. We happened to run into Sebastian as we were leaving the hotel who, sadly, informed us that he wouldn’t be coming to dinner with us, but may be able to make it on Sunday evening.

From there, the two of us that were fully dressed had to lock up our fashion accessories into a container I had brought just for the occasion. You see, in Virginia, handguns used to go on rampages in airports on a daily basis, would try to sneak through the metal detectors into the secure areas of the airport and even were known to shoot fully loaded airliners plumb out of the sky.

None of that really happened, but a little bit ago, the geniuses in Richmond decided that those terrible things MIGHT happen if those evil guns were allowed to roam the non-secure areas of airports so they must remain safely leashed outside of the building at all times.

Anyway, we uneventfully picked up JR and Kevin and had plenty of time to get to the Lone Star Steakhouse in time for our reservations at 7. 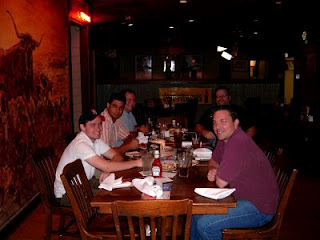 After discussing the finer points of Virginia carry law…especially the requirement to carry openly in restaurants that serve alcohol…and getting fully clothed again, we had a very enjoyable dinner joined by fellow local blogger, Laughingdog.

As Robb noted on his blog, no innocent bystanders were harmed by the three openly armed men enjoying dinner. I must admit that I saw our waitress notice my Ruger P-97 on my hip and do a double-take. At this time we had already finished our meal and were just waiting to pay. It obviously surprised her that I’d been armed the whole time and she hadn’t noticed, but to her credit she remained friendly and cordial and, other than that original startled reaction, demonstrated no concern.

Anyway, other than a minor little altercation between Kevin’s belt-loop and a bug deflector on an SUV (the bug deflector lost), we had a very enjoyable evening and Caleb, JR, Kevin and Robb were their normal, hilarious selves. I wish I’d brought my digital audio recorder because I’d love to share some of it with you, but I’m afraid the humor would be lost in translation and I’d probably remember it wrong anyway. But we had a great time.

I’ve got reservations at Freemason Abbey in downtown Norfolk on Sunday evening and I’m hoping that the whole group will be able to come to that. Which, of course, means that I’ll get fresh, first hand accounts of the weekend’s activities. I can hardly wait.

Oh…and a shout out to fellow salty sailor and gunblogger JR who picked up my tab at Lone Star. Thank you very much my friend. You are a gentleman and a scholar…but don’t worry, I won’t tell anyone.