Subtitle: A Tale of Two Matches

My wife and I had taken some extra days off over this Labor Day weekend because we intended to drive up to Maine to visit (and for me to meet) some of her family.

Unfortunately, she is still having lingering problems with her back and didn’t think she would be able to make the drive without being in agony. So…with a day off and no voyage to undertake…RANGE TRIP.

It was a great day for it, if a bit hot and muggy. There was one other gentleman there zeroing the scopes on a a couple of beautiful rifles. A Remington .270 and a .22-250 of unknown (to me) manufacture. Since I arrived first, I was the designated Range Master so we coordinated hot/cold range and talked a bit. He only stayed about three hours and the rest of the time I had the range to myself. This allowed me to go uprange and practice some shooting on the move, draw and fire drills and such.

Before I get into the results of the two e-postal matches I shot while there, I want to mention my four major take-aways from yesterday’s range time:

1. After only getting 5 hours of sleep, spending 6 hours at the range is a bit much. I was getting pretty tired and irritable by the time I decided to pack up and go home. the hour drive each way didn’t help. But, I did have a good day at the range even if I was hot, sweaty and very tired. Try to get enough sleep before attempting to spend all day at the range.

2. The sooper-sekrit Todd Jarrett Kung Fu pistol grip…works. I don’t even know if I was doing it absolutely correctly because I was just going by descriptions given by the guys who had first hand training, but just a couple of simple changes and I could tell the difference. As they all said, after just a little bit of practice and getting used to it, recovery between shots was MUCH quicker and my sights just fell right back onto the target. Amazing. I will do a post a bit later on specifically about my experience with this and some pictures to illustrate the differences in grip.

3. I generally (or at least used to) consider myself more of a rifleman than pistoleer. I grew up shooting rifles and didn’t really do any pistol shooting until after joining the Navy. I’ve always been a better shot with a rifle than a pistol. Well, for the past several years, after getting my CHP, I’ve been working on getting better with a pistol. I’ve succeeded and my pistol shooting has gotten markedly better. In the meantime, however, I’ve been a bit remiss on getting to the rifle range and keeping my rifle skills up to par. As everyone knows, marksmanship is a perishable skill and my shooting demonstrated it. I was NOT impressed with my riflery yesterday. Something I definitely need to address and thanks to Sebastian for coming up with the Gun Blog Rifle league which will encourage me to keep working on it.

4. I need a new shotgun if I’m going to even attempt to shoot skeet. What I’ve got is an old Springfield 24″ barrel, full choke 12 Ga pump. I really need something with a bit wider choke pattern, or with replaceable choke tubes. It’s also begun having some issues. I haven’t fired it in over two years and the last couple times It had had some feeding problems. When racking the slide forward, the shell would hang up going into the chamber and I’d have to pull the slide back to the rear and forward again to chamber the round. Well, that was happening WAY too often yesterday. I basically couldn’t count on shooting doubles because I may or may not be able to effectively rack the second round into the chamber. Also, I was having light strikes at first. This seemed to start clearing up toward the end of the round, but I’m not sure. I think I’ll put my gunsmith hat on and see if I can figure out and fix these problems…and then sell it so I can buy something a bit more suitable for shooting skeet. Oh…and I need to have someone at the shooting club show me how to set up the delay on the target control system. I couldn’t figure it out. When by yourself, having the bird released as soon as you push the button is a little problematic because by the time you drop the controller, grip the shotgun and shoulder it, you’ve only got a split second to fire before the bird is out of bounds.

Now to the results of the two matches I shot yesterday:

First, the e-postal pistol match, “Faster”, hosted by Caleb at Call Me Ahab.

If not with my actual score, I was very happy with my grouping with both pistols. I started with the pistol holstered, ten rounds per magazine. I drew and sighted, fired five rounds as quickly as I could get the sights back on target (very quickly using the newly learned grip techniques), sighted on the second target, fired five rounds quickly, magazine change as quickly as possible and repeated the process. I ended up firing 20 aimed rounds from the draw and with a reload in (estimating here) less than 15 seconds. Maybe not Todd Jarrett fast, or even Caleb fast…but that’s pretty good for me. 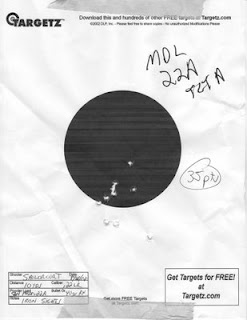 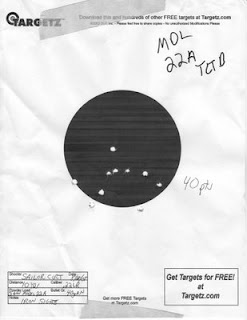 My group widened up a bit on Target B. I think I was rushing a little after the transition between targets. 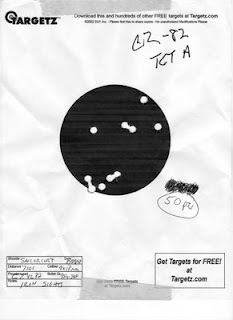 As with the .22, I seemed to have been having a little trouble maintaining my sight picture after transitioning to the second target, not only did my groups widen up (with both pistols), but went low with the CZ. 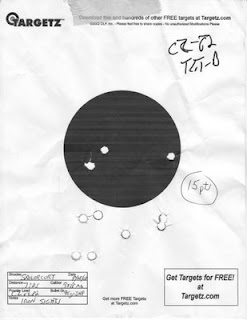 On the second target, I only had three in the black. I still had a respectable grouping, but it was consistently low. My total score with the CZ was 65 out of 100.

As I said, I would have liked to have had more in the black and higher scores, but I’m very pleased with how quickly I was able to finish the course of fire and with my groups. My worst group was only 4 3/4″. IMHO, that’s not bad at all for rapid fire.

Now for the less encouraging part.

The Rifle match is shot at 100 yards in four stages. Our range is actually measured to 100 meters which is about 110 yards so that’s my excuse for doing so poorly…yeah…that extra ten yards…that’s the ticket.

Anyway, I started out with the Garand, which is the only rifle I have a proper sling for. BTW, I don’t use the 1907 leather sling, I use the standard Garand Web sling, which I find to be more uncomfortable than the 1907, but allows for finer tuning of the sling tension. For the SKS and Carbine, I used the “hasty sling” method of leaving the sling attached to the sling rings, fore and aft, and looping the sling around my arm. This is a quick method, but is not nearly as effective as a properly employed traditional sling configuration. 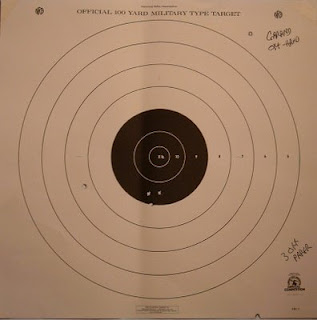 My off hand…for lack of a better term…sucked. This is the only position, by the way, in which the use of a sling is not allowed in service rifle competitions. I was SO bad, that, not only did I only have five out of the ten shots in the scoring area, but three of them were so low they were on the next target down, on which I shot the sitting portion. 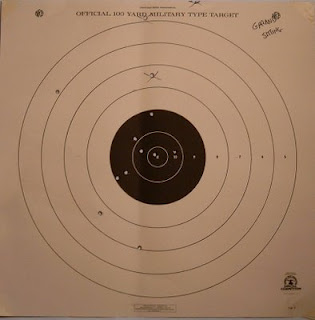 On the sitting target, the three holes toward the top that are Xed out, are the three flyers from off-hand. 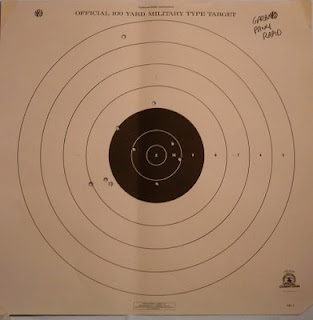 On Prone Rapid, I shot an 85-0X. With the exception of the one flier in the 5 ring, this was the best group of the day…not saying much. 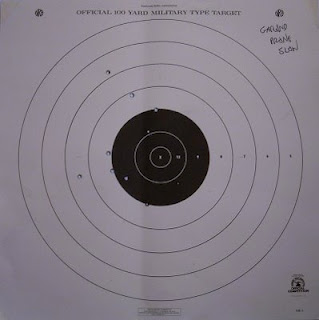 I was VERY disappointed with my prone slow stage. I was very inconsistent and, although the group was one of the two best of the day, with nothing outside the 6 ring, I had no tens so the score was low and the group was still miserable. I used to routinely shoot in the black in prone slow fire. Boy do I need practice!

Disappointing is an understatement. 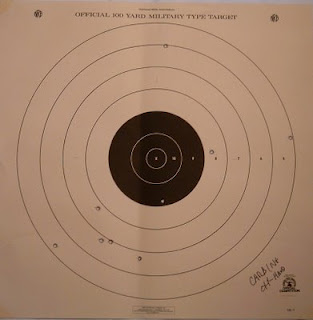 Not only does the carbine sling not lend itself to competition style shooting, but the sights are not “click” adjustable for elevation. The aperture is mounted on a ramp with detents. The sight is slid up and down the ramp to adjust for elevation…better than the “Flip” sights that the Carbine originally came with, but still not exactly a precision setup.

Even so, the Carbine is a light, handy rifle that lends itself well to off-hand shooting and I did marginally better with it than with the Garand.

All but one were on the paper and the one was just slightly off the paper below. That still sucks, but better than only having 7 out of ten on paper. 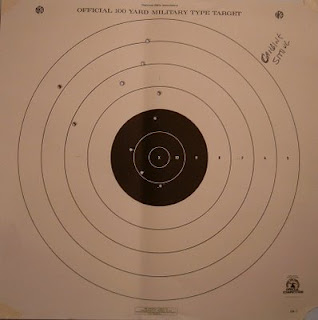 My sitting group was a little better, but centered high and left so the score was still pretty sad. 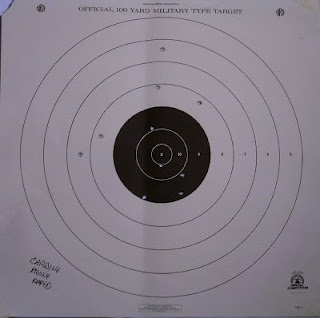 I again did better prone rapid than prone slow. Very disappointing. What that means is that my setup is not consistent. In slow fire, you have time to set up again for each individual shot. This should shrink your groups considerably since you can fix any issues with a slipped sling, natural point of aim etc. The fact that my groups were as big as they were tells me that I’m not consistent in my setup. The only cure for that is practice practice practice. 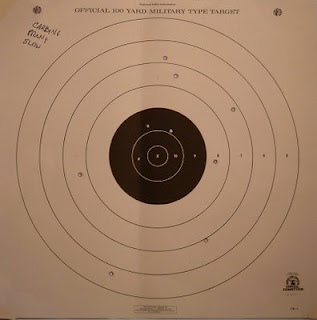 Prone Slow: made of fail.

Finally, the SKS. As most people know, the SKS is not exactly designed for accuracy. I did replace the iron sights and I have a scope mounted on a Choate Scope Rail. For this competition, I used the iron sights. By this time, I was very tired and was having trouble seeing the targets through my diminutive spotting scope. I finally gave up on trying to check the zero on the sights and just shot it as is. It seems they are off to the left about 6 inches or so as my groups were consistently centered to the left. There was a slight right to left breeze, but not enough to make that much difference. I’d figure 3 inches for the breeze and three inches for sight adjustment. the elevation seemed to be pretty good though.

Also, right before going to the range, I noticed that the SKS receiver and barrel have become loose in the T-6 stock. The will move fore and aft noticeably in the stock. Something I need to address and can’t be good for accuracy. I decided to go ahead and shoot it anyway, but only shot with the iron sights. By the time I got done with that I was too tired and frustrated to keep going. I also didn’t shoot my Marlin model 60 .22 rifle either. Just too tired and frustrated by then. 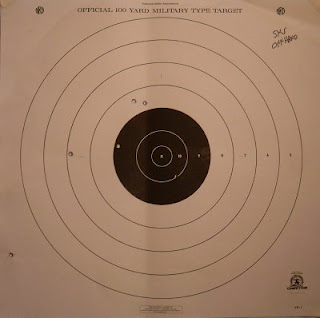 At any rate, the SKS is a very front heavy rifle and doesn’t lend itself well to off-hand shooting. Even so, I didn’t do much worse with it than with the Garand. 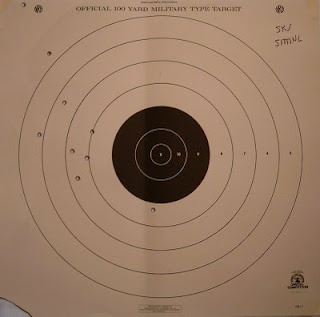 Sitting is where it becomes apparent that the sights were misadjusted. 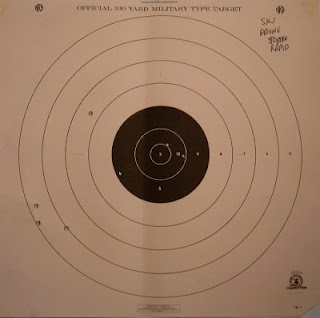 That impression is reinforced by prone rapid. 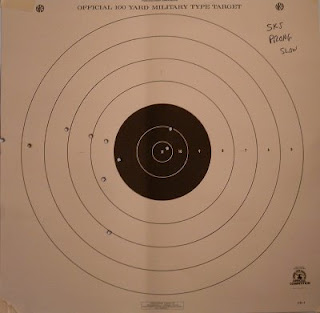 The really sad thing? I have to acknowledge that, because the sights were obviously off, the 2 “X”s that I hit with the SKS were both fliers.

Anyway…there you have it. My results in all their…um…glory? If anyone feels froggy and wants to double-check my math, I’d appreciate it. Basic math is not one of my strong suits.

Sorry for such a long post. It was a long day.