Thirdpower pointed to this ridiculous attempted smear of John McCain claiming that he caused the fire on the USS Forrestal by intentionally initiating a “Wet Start”, contending that it was a “common practice among hot-dog pilots.”

First, I was not an Aviation Ordnanceman (AO), but I was ordnance qualified up to and including the Quality Assurance/Safety Observer (QASO) level. I have 21 years of experience with Naval Aviation Maintenance.

A wet start could not have, in my opinion, lit off the propellant of a zuni rocket. A wet start is caused by fuel pooled in the combustion chamber. That fuel would ignite upon startup and cause a flash fire that would blow out the exhaust pipe of the affected engine. The fire is not a sustained flame but a quick “Whoosh” that flares and then is gone. I do not believe that such a short duration event could light off a rocket propellant as is charged.

A wet start can cause damage to the aircraft and engine and I find it very difficult to believe that, even in the free-wheeling days of Viet Nam, a pilot would risk his aircraft and his own safety by intentionally causing such an event…hot-dog or not.

But even if you do assume that John McCain was irresponsible enough to do it…and that the flash fire from a wet start was sufficient to light off a zuni rocket, the orientation of the aircraft at the time of the fire make it absolutely, unequivocally, undeniably impossible. 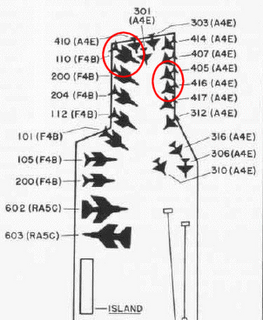 Here is a picture of how the aircraft were parked at the time of the accident. Public domain photo brazenly stolen from this Wikipedia page.

John McCain was the Pilot of A-4 number 416 which was parked TOW (Tail Over Water) on the Port Aft portion of the Flight deck. The F-4 that is believed to be the aircraft from which the Zuni rocket was inadvertently launched was number 410 parked at the starbard corner of the stern, also TOW.

For those completely ignorant of aircraft (as is, presumably, the author of the ridiculous conspiracy theory), the exhaust of a jet engine points backward….to the rear…behind….away from the pointy end.

In other words, EVEN IF John McCain intentionally initiated a wet start, the fireball would have been harmlessly launched out over the ocean…not at the F-4 from which the Zuni rocket was launched.

Some may argue that “The picture came from Wikipedia and, therefore, cannot be trusted.” 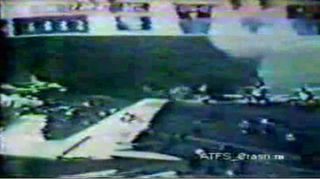 Well…here is a screenshot from a movie I must have seen 100 times while in the Navy. It is from the PLAT (Pilot Landing Aid Television) camera mounted on the Island You can clearly see the burning A-4 sitting in exactly the spot identified in the drawing and the other intact A-4’s parked with their noses pointed inboard and their tails out over the water.

Finally, the fantasist who came up with this brilliant conspiracy theory charges that “McCain panicked, and dropped two bombs into the fire.”

There is this thing on Navy aircraft called the “Weight On Wheels switch”. There is one on each landing gear. It is a safety interlock that, if the aircraft is sitting on its landing gear, prevents such mundane things as…say…retracting the landing gear and…oh…releasing ordnance. The only way the bombs could have dropped from McCain’s plane would have been due to a malfunction…not because he “panicked” and hit the “drop bombs” button.

But I guess by now this shouldn’t surprise us coming from the left, now should it?