Armed Veteran, in comments to my last post, asked about who owns Waterside:

I too went to Hooters after the city council meeting. Unfortunately, I went to the one over on Military Highway instead of Waterside. Correct me if I’m wrong, but isn’t Waterside owned by the city of Norfolk? And if so, doesn’t that make it public property?

I started to respond in comments but it’s a complicated subject and quickly got too long and involved so I decided to make it a post of my own.

I’ve only done some cursory investigation and really don’t have time to pursue it in detail but I’m hoping that some enterprising blogger looking for fame and fortune may have the time, inclination and ability to look into it.

Waterside receives city funding but is officially owned by a private entity, Waterside Associates, whose partners include the Norfolk Redevelopment and Housing Authority, said NRHA assistant executive director John Kownack. Its policy prohibits weapons, yet weapons are not included on a list of prohibitions posted at Waterside’s entrances, he added. [emphasis added]

I was under the impression that Waterside was owned by the NRHA, so the revelation that it was actually owned by a private company came as a surprise.

First I looked at the NRHA web site for their financial reports because I distinctly remembered some hoopla a while back over the fact that Waterside was losing money and the city was going to have to cough up more or it would go under. 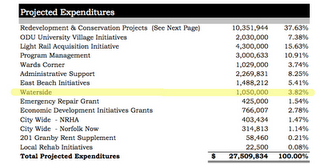 Sure enough, the 2009 final budget lists over a million dollars in expenditures for Waterside (page 45). (click to make bigger)

So, I tried to find some information on “Waterside Associates”. What I found was…very little. All I found was a listing on a business web site.

Because of the dearth of information on the web, I called the General Manager of Waterside, Mr. Lane Brown. He graciously answered my questions. Unfortunately, I’m not very well versed in business arrangements so I really didn’t have a good idea of what to ask.

What he told me is that Waterside Associates is a “limited partnership”…the “limited partner” being the Norfolk Redevelopment and Housing Authority. I honestly have no idea what that means. Does that mean the the NRHA partially owns waterside? Or is just an “investor”?

I can tell you what it SEEMS to me. It seems to me that the NRHA formed a shell or holding company called “Waterside Associates” to provide a layer of insulation between them and what actually should be a private venture. I have a feeling they did that to insulate the city from liability that may arise from the antics of your typical falling down drunk patron of Waterside on your average Friday and Saturday nights…but I find it interesting that, in that Pilot article, NRHA assistant executive director John Kownack appears to be unusually familiar with the policies of Waterside in regard to firearms. That would indicate to me that NRHA is much more intimately involved in the management of that venture than just as a “limited partner”.

Someone with a legal background is going to have to decipher the meaning of all this, but the question of whether Waterside is “public” or “private” property doesn’t seem to be incredibly clear to me. It seems to me that this “limited partnership” thing is nothing more than an underhanded way of effectively maintaining city government ownership of the property, while insulating the city from liability and shielding the facility’s day to day operations from the scrutiny and control of the public that, in reality, owns it.

Be that as it may; even if Waterside is, through whatever legal gyrations are going on, considered private property, it is admittedly not posted “no guns”. Therefore, by my understanding of the law, unless Dan was asked to leave by a representative of the owner of that private property, he was not trespassing.

A Police Officer is a representative of the government, not of private property. Perhaps if the Officer had presented it in terms of “the management of Waterside does not allow firearms, so you’re going to have to leave or be charged with trespassing”, he may have a leg to stand on. But, by my understanding, the encounter went more like:

Officer: “It’s illegal for you to openly carry firearms here”

Officer: “Yes, it is and since you didn’t leave immediately, you’re under arrest.”

Or something to that effect. If that’s even close to the way it went, it doesn’t matter whether Waterside is private property or not. As far as my (admittedly, common-sensical and, therefore, VERY un-lawyerly) understanding of the law goes, Dan was right and the Officer was wrong. He was not trespassing until asked to leave by the owner of the private property or a representative thereof.

That’s my take on the whole thing. In summary, I think a case could be made that Waterside is public property and, therefore, the management has no authority to declare it gun free. If that premise fails, the argument that Dan was never asked to leave by representatives of management and, so, was not trespassing, is equally valid. And that’s not even considering the racial undertones of the event.

I’d be happy to entertain any further clarifications or information by anyone with a legal background who can shed some light on this situation.